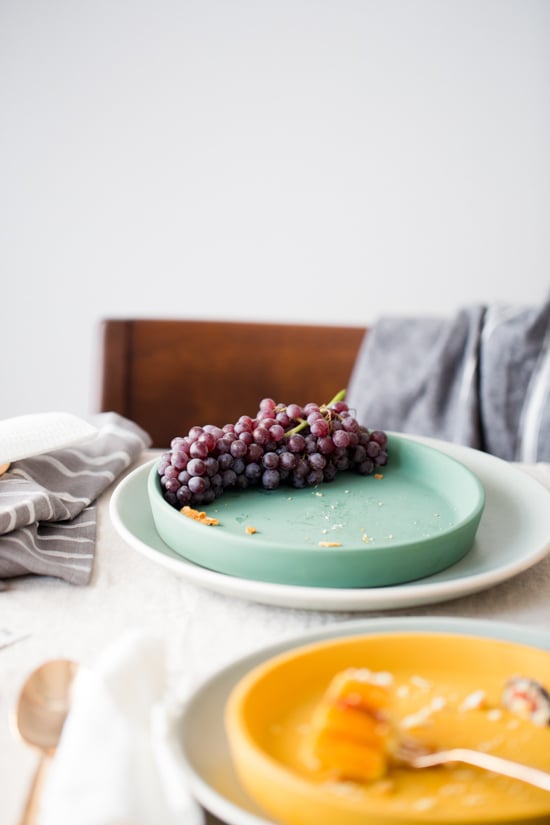 When I put together this dinner party shoot last month, I had Sarah snap some pictures of me setting everything up too. So I could share some behind the scenes photos with you today.

And in the true spirit of Behind the Scenes, I have an embarrassing image or two in the mix to remind us all that things aren’t always as they seem.

I mean, it’s basically a hot mess around here, at times. But it’s my hot mess and I like it.

So check out this post to see the final shots of my recent dinner party shoot and then head back here, so we can jump into the behind the scenes stuff. To get the knotted garlands at the correct height for the photographs, I had to tape them to the window on one side and then the opposite wall. Normally, I would hang them from the ceiling, but the swoop I wanted just wouldn’t have worked if I hung them that high. Plus, it’s super official this way, right? With painter’s tape and everything. Very chic. Ha.

Aaaand you can also see that I never fully painted the wall behind me (which I’ve since fixed, but it was like this for way longer than I care to mention). We cropped it out of all of the photos, so no one was the wiser. Well, until now.

Here’s how the finished garlands turned out… Let’s talk flowers… I changed the centerpiece a couple of times during the shoot because it wasn’t feeling right.

I tried one floral centerpiece. Then added a couple more as a second option. And then removed the flowers all together to go with something much more minimal (which I ended up scrapping).

It was good to have options, but in the end, I decided on multiple floral centerpieces for the colors and the variety of heights, to fill the frame for certain photos that I knew I wanted Sarah to be able to capture. On to the food prep… I don’t have a honey dipper, so I used the handle of a spoon instead, to drip honey over the goat cheese and fig crostinis. It worked just as well, so I ended up including the idea in the hacks for the original post.

But initially, it was just a behind the scenes thing, that I hadn’t planned on sharing. At the end of the day, things started looking a lot like this (above). Piles of food and other random goodies. Falling garlands. All of that.

But nothing a few slices of cake couldn’t cure. Right? Cake makes everything better. Have your own behind the scenes moments to share? Id love to hear how you approach styled shoots. Or even just a funny or embarrassing moment you have to share.

I came across your blog on Bloglovin’ and I’m so inspired! Your posts come across so real and sincere. You have beautiful photos but you’re not afraid to admit to the behind-the-scenes stuff either, which is great. Obviously, this post is all about that, but I get the same feeling from your other posts as well. They might not show the behind-the-scenes stuff, but you speak with the same voice, regardless.

Lovely photos! Can really appreciate the effort that goes behind it all too! Abi 🙂

The photos looks wonderful, but may I ask what is the cake made of? Looks delicious….

Thanks for posting this behind the scenes look! As a newbie blogger, it’s great to see these styling ideas and that I’m not the only one making huge messes all the time trying to get flawless shots! Also, I may be one of the only people who actually DOES have a honey dipper, haha!

Thanks for sharing this behind-the-scenes look! I love seeing what goes into a photography shoot, it’s always fascinating (and inspiring, for me at least)!

I love behind the scenes stuff, and the honesty about the painter’s tape, clutter, and wonky cake. LOL! We all do these kinds of things – it’s just nice to actually see!

This was great! Exactly what you need to see as a blogger to know that your own chaos behind the calm is normal!

I love these behind the scenes photos! It’s so cool seeing the work that goes into your posts, and how it all ends up coming together.

Those goat cheese & fig crostinis look to die for!! Love this behind the scenes look into a dinner party too!

I love that you included this on your blog. it’s so nice to see the styled and the real alongside each other so that we all know you’ve got style but are real at the same time! thanks for sharing!

Always love behind the scenes shots! Really fun to see a peek into your process, and taping garlands to windows really is the only way to go!

wonderful behind the scenes photos! i bet the dinner was fabulous! 🙂