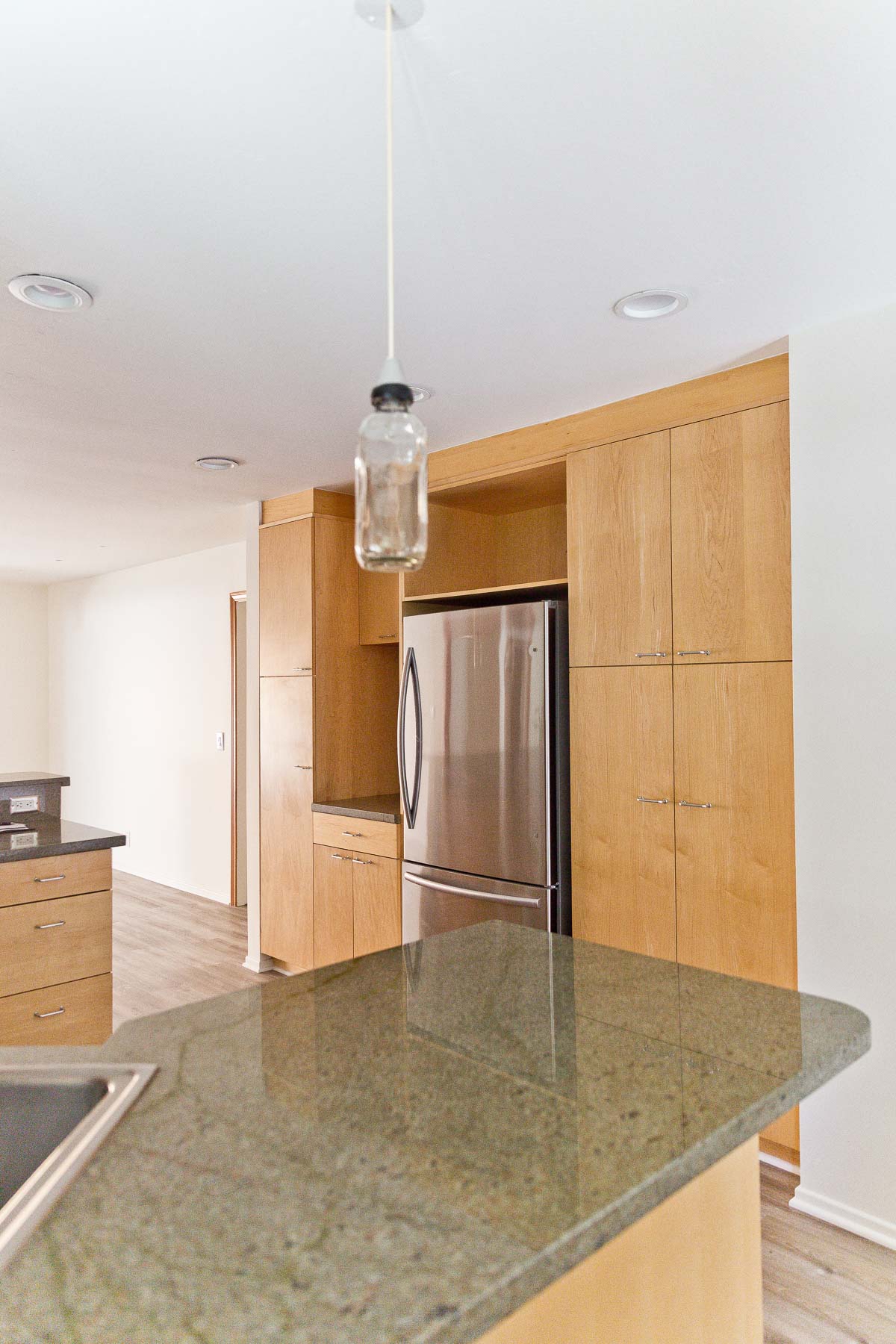 I have wanted to buy a house again for SOOOOO long! And it took us a long time to get here. But now, I can officially say, WE BOUGHT A HOUSE! In this insane market (especially in Southern California), I feel like this is something to be pretty excited about. But also, even the market wasn’t insane right now, I’d be very excited because that means I’m about to have projects galore. And I’m so pumped about it.

That said, there’s a lot of work to be done in our new place, and changes have already started. So I figured it would be a good time to share all of the before photos of our new home.

So, first! Some more about the house… The house was built in the 60s, but doesn’t have much (if anything) from that time period still in it. Unfortunately. I would have loved to have more 60s elements in this home, but it was remodeled at some point, long before we bought it. Which means it’s in need of renovation again. Feels dated, but in good / solid condition. I like to say it’s somewhere in between a gut job and a completely remodeled house.

Anyway, the house is 3 bedrooms and 2 baths, with an additional detached office space. It feels super private, which we love and there are some sneaky spots outside where you can see the mountains. And that makes it feel kind of magical to me, honestly.

I have ALL kinds of plans for what we want to do with the space, but we’re doing things in phases to pace ourselves and save up money as we go. First on the list is a new roof (the current one is more than 20 years old), new skylights (which I’m so, SO excited about), a phase one kitchen renovation (small changes), and new hardwood floors. Eventually, we’ll do a larger (phase two) kitchen reno, remodel both of the bathrooms, replace the windows, and so much more. We also have a plan for eventually opening up the living room to the front porch that I REALLY hope we can swing, but I’m not sure yet. Fingers crossed.

ANYWAY, here are all of the before photos of the interior. Its hard to make pictures of a completely empty house look interesting, and admittedly I took these kind of rushed one day to make sure I could get photos before we started moving furniture in, but here we go…

When you walk in the front door, you’re immediately in the living room. There’s no entryway or hallway area, since it’s a smaller house. And while I wish there was a bit more space when you walk in, I don’t mind it being set up this way.

I love the statement of having a giant fireplace when you walk in. But what  don’t love is that it’s covered in ledger rock. NOT MY THING. And in combination with the LVP flooring throughout the house(which is also not my favorite), it’s like a grey wonderland in here. Which I’m not so into. We’ll change the flooring when we can AND the fireplace too. But for now, I plan to paint it (the fireplace not the floor) until we can make more substantial changes to the fireplace.

The windows in the living room are really big, which is great! But they’re original, so they’ll need to be replaced at some point. And this is the area that we have bigger plans for down the line.

In an ideal world, I would love to do a huge bi-fold (accordion) door to replace the two windows in here. That would span almost the entire length of where the windows are now. The thing about this type of door is that it requires some structural changes and that means big bucks.

That said, we haven’t ruled it out yet. It’s something we have pictured since the first time we looked at the house and something that I absolutely would love to do. I think it would completely transform the space. As a more cost effective alternative, if that doesn’t end up being in the cards for us, double doors in place of each window would be nice as well. 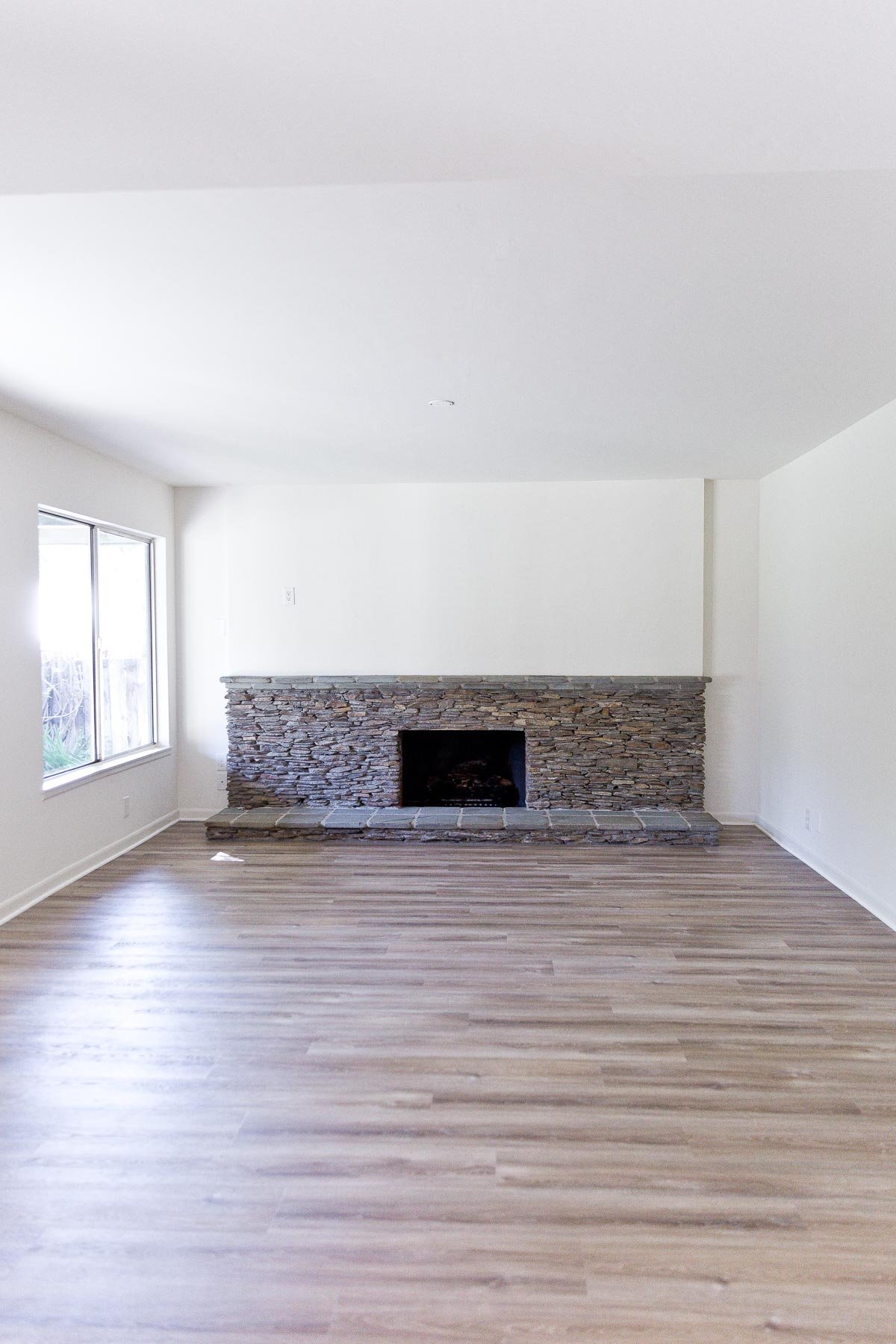 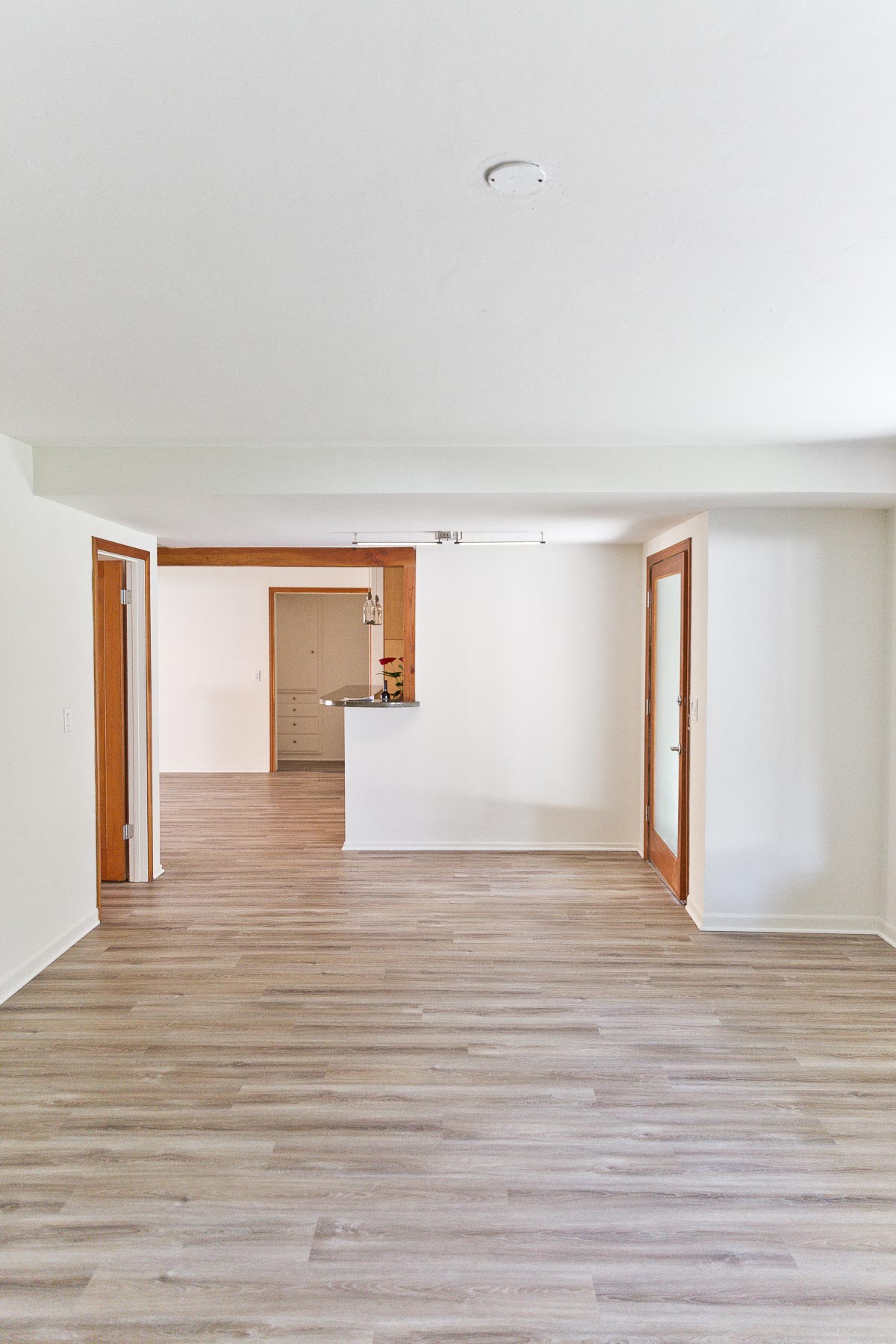 To the right of the front door is our kitchen. It feels very tucked away and closed off right now and I want to change that as much as possible, without removing the wall that separates the living room from the kitchen. I think…

I’ve gone back and forth on whether removing that wall entirely would be cool for the space. But ultimately, I think, because the kitchen space isn’t that large to begin with, we probably don’t want to cut down even more on the amount of possible kitchen space there could be. Plus, I like the idea of having this room a tiny bit removed from the main living space. Even if it’s just a four foot long wall that separates the two.

BTW – This is the first room in our house that will be getting a makeover. We’ve already started making changes in here and am excited about the possibilities in here. It’s not our style, as is, of course. And I hope to expand the kitchen eventually, but I’ll explain more of the changes we are making in here in a separate post. 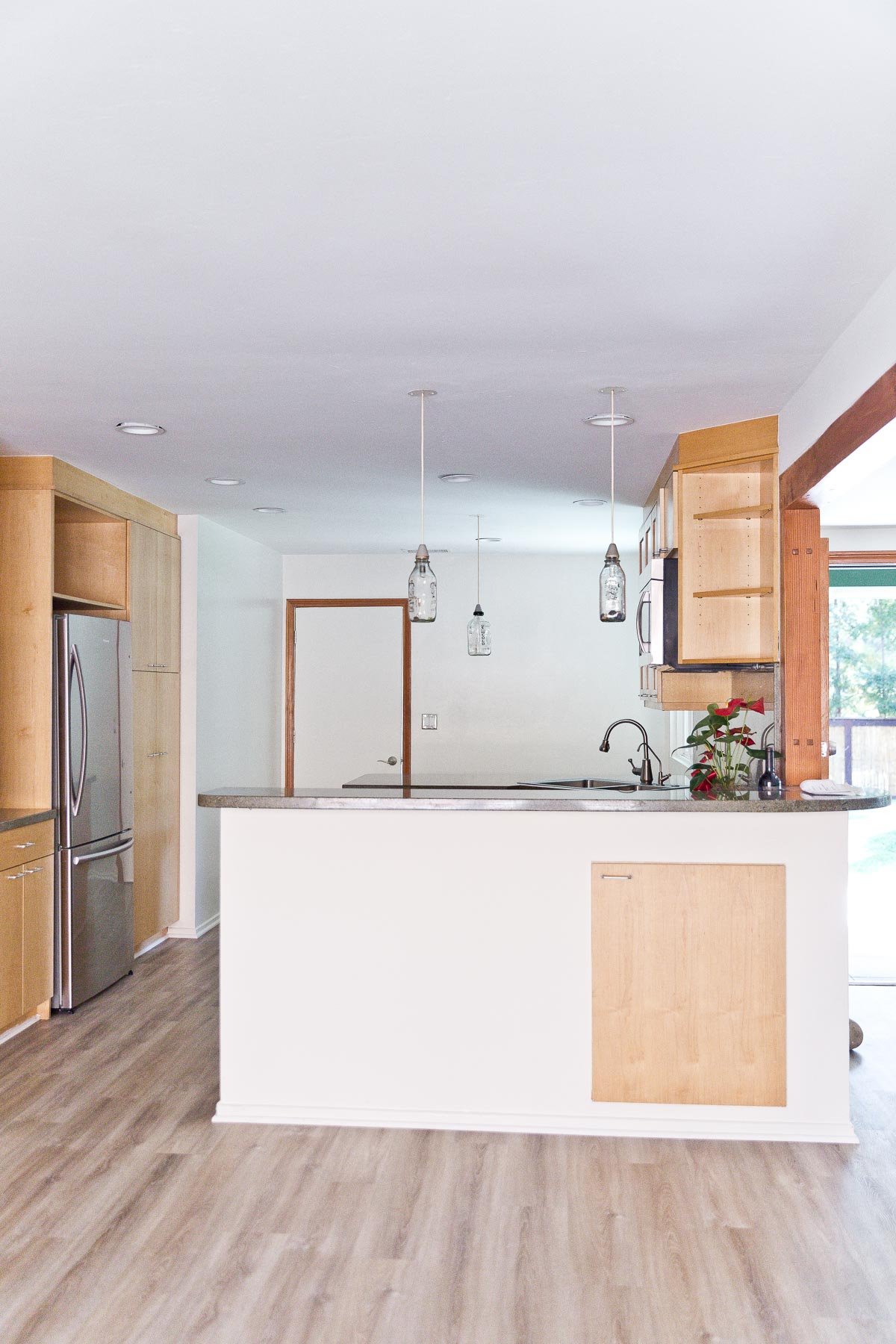 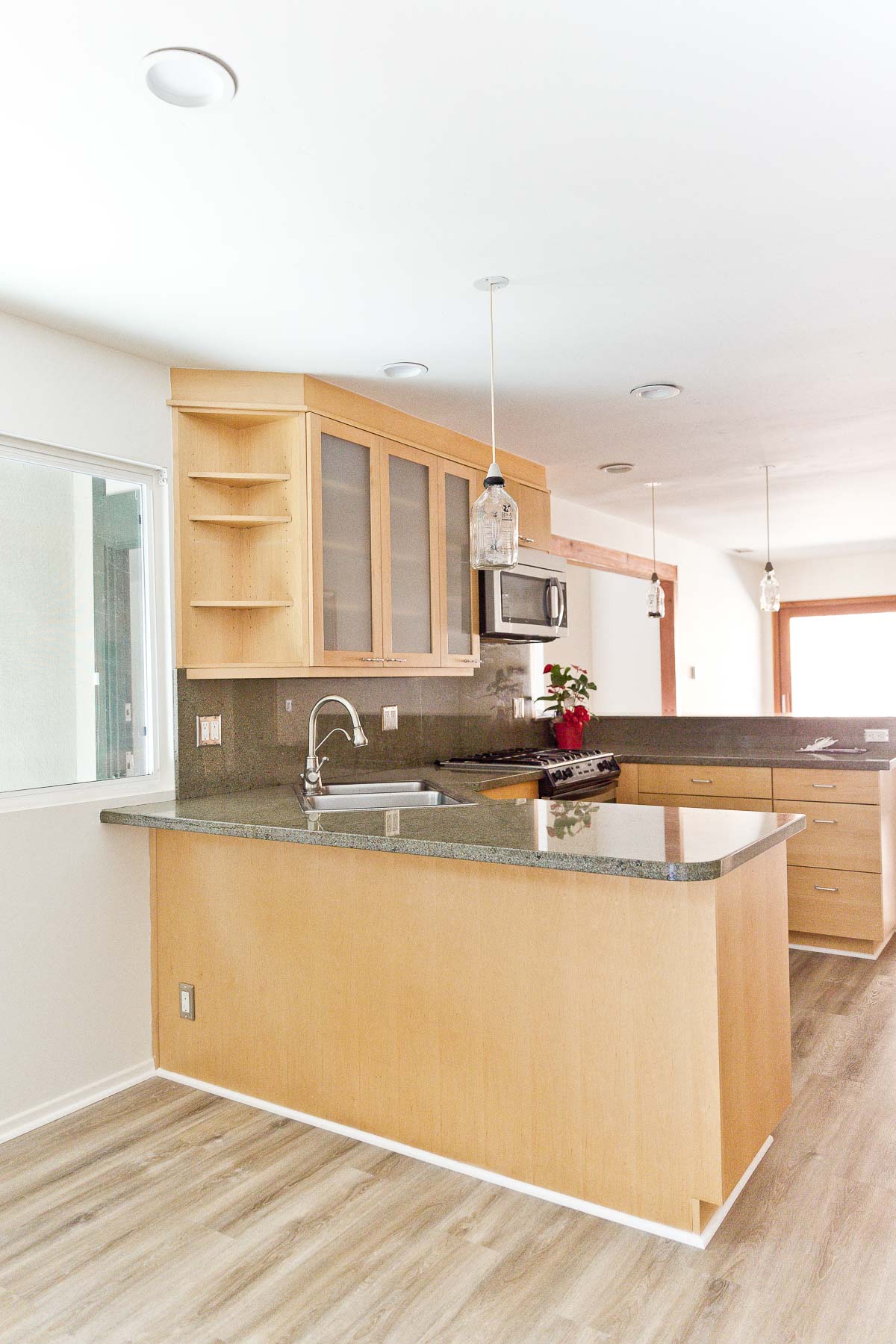 Didn’t get any great photos of the dining room space, unfortunately. But you can partially see it from this angle below. Still getting used to photographing rooms in a higher space. Can you tell?

There’s a sliding door that leads out to the backyard and enough space to fit a small(ish) dining table. It’s small but feels 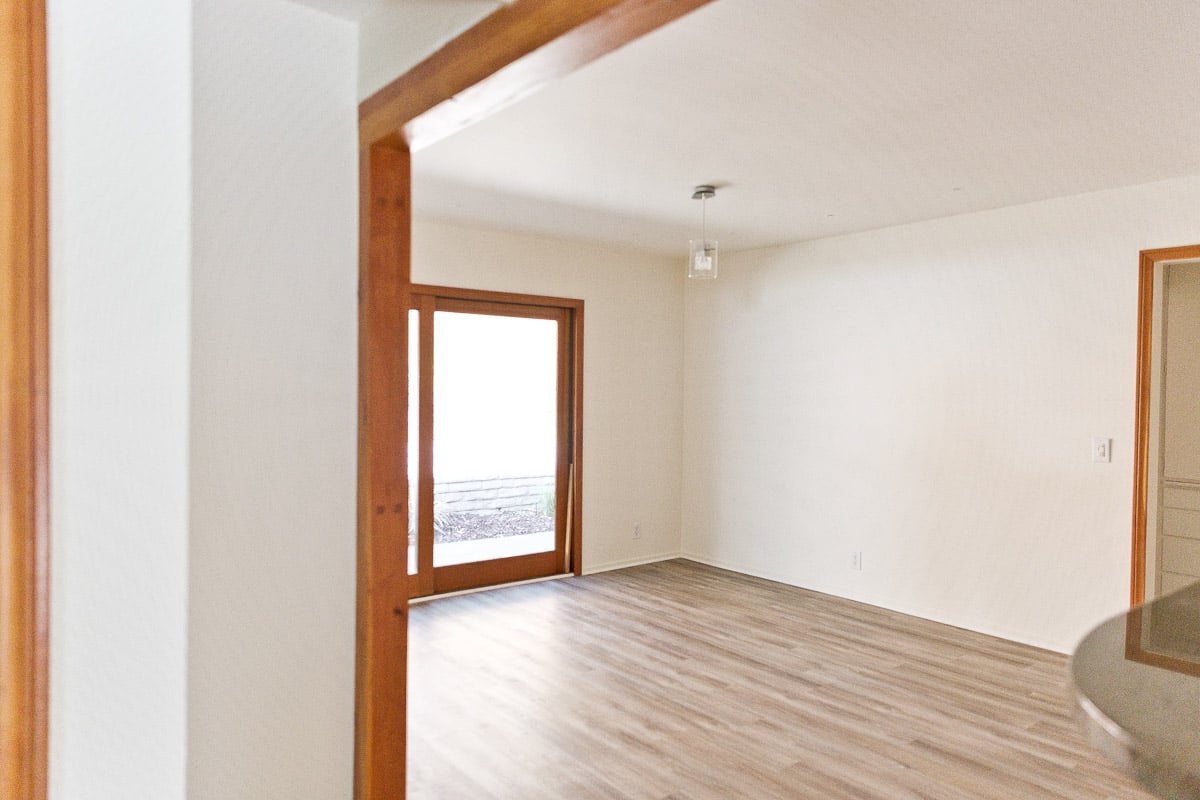 The thing I love most about the primary bedroom is the big doors that lead outside. The side windows, next to the double doors, swing all the way open too (just like a door). Which is pretty charming. The room itself is a little tight, but the big doors that go outside really help it feels less closed off.

Probably the weirdest part of the house layout is that the primary bedroom is right off the living room space. When we first saw the house, it bothered me. And it still kind of does, if I’m being honest. But now that we’ve been living here for a little while, I’ve gotten used to it. And no house is without it quirks, right? 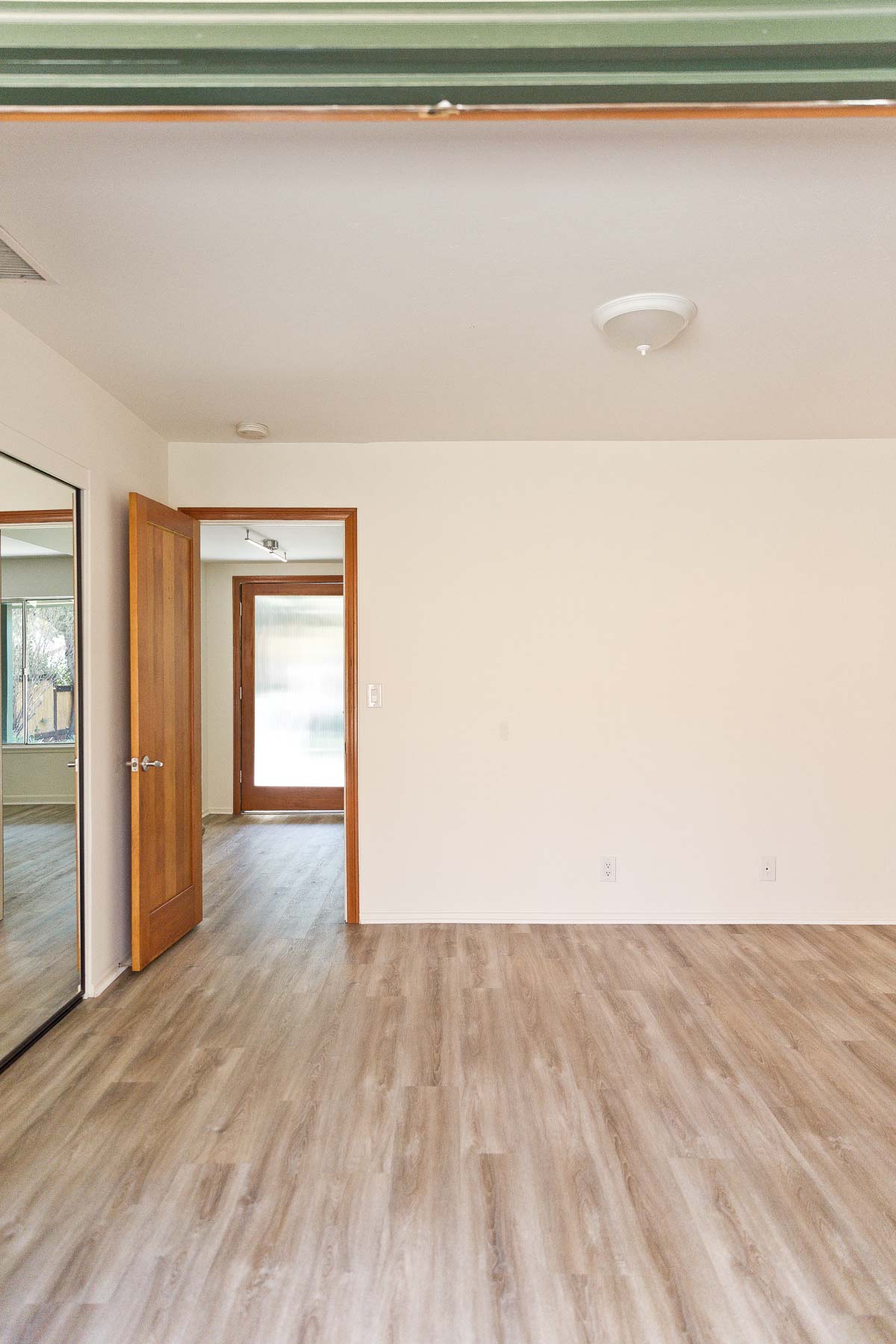 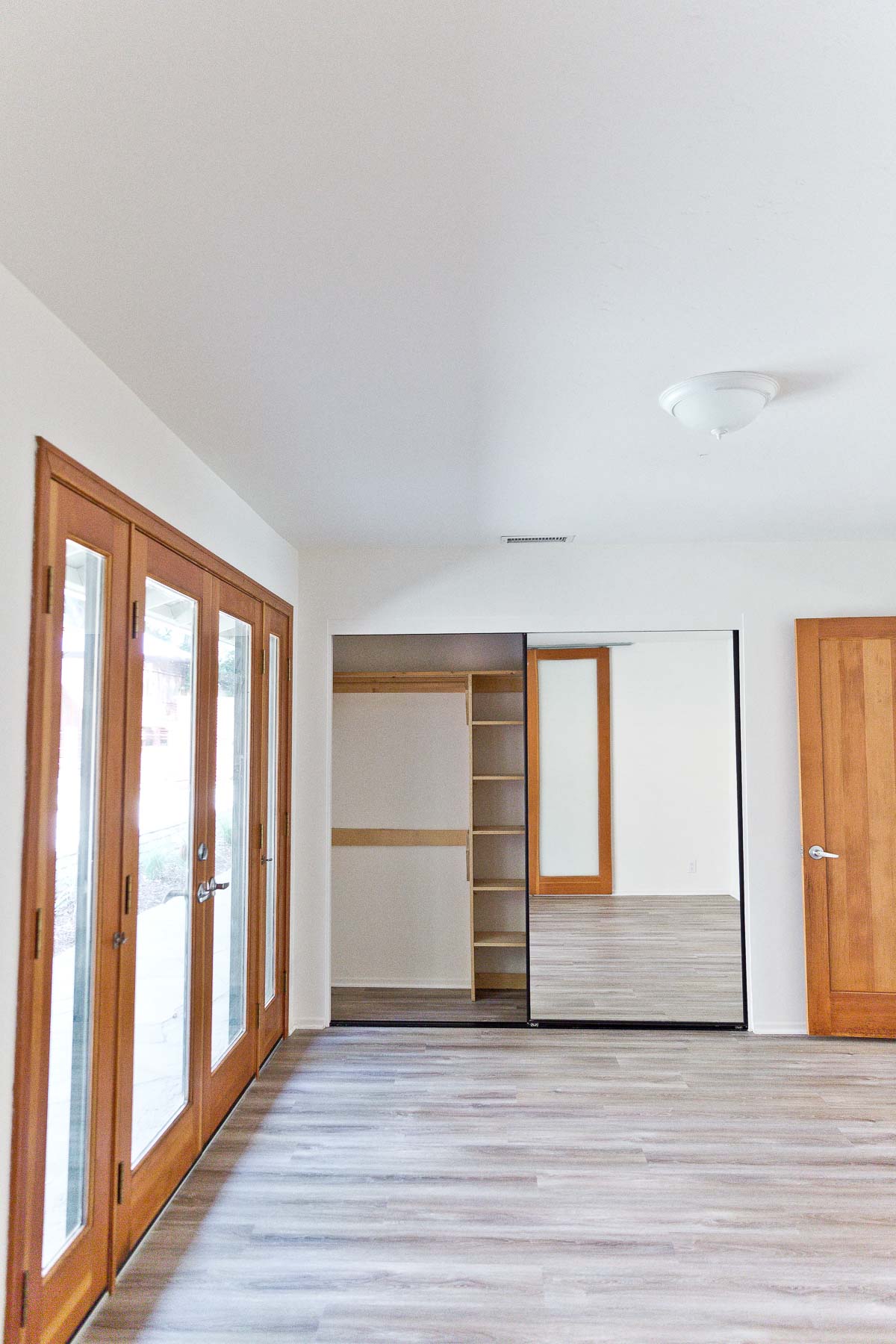 The layouts for the two other bedrooms in the house are very similar. Hayes’ room is a bit smaller than the guest bedroom, but they each have a decent size window and a fan. 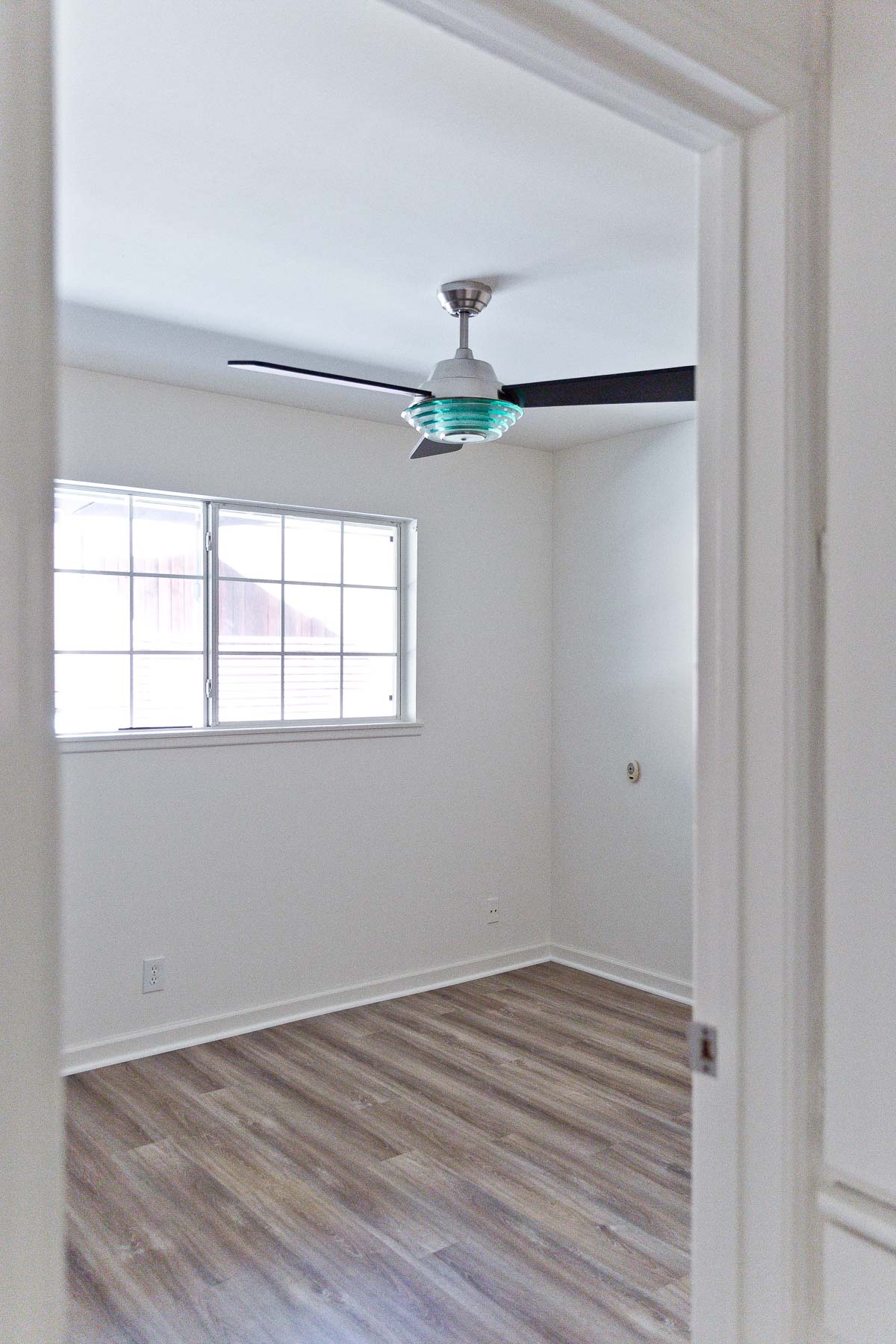 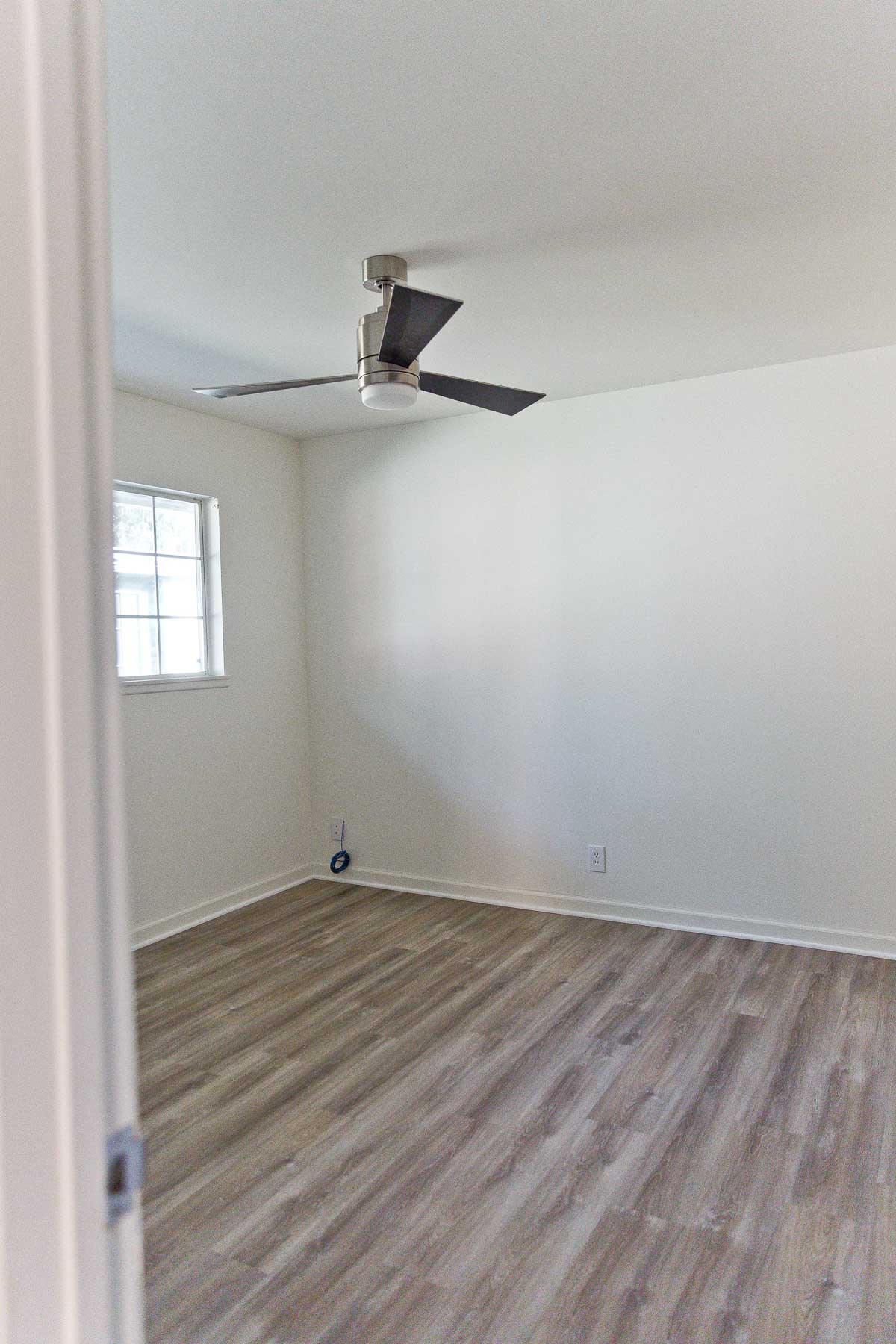 Our new house has two bathrooms. One en suit bathroom that is connected to the primary bedroom. And one between the two other bedrooms for Hayes and guests to use.

Both bathrooms need a decent amount of upgrading, which I’m a dying to start doing. But it’s not my first priority. So we’ll get it at a later time. Once we get some other renovations out of the way. 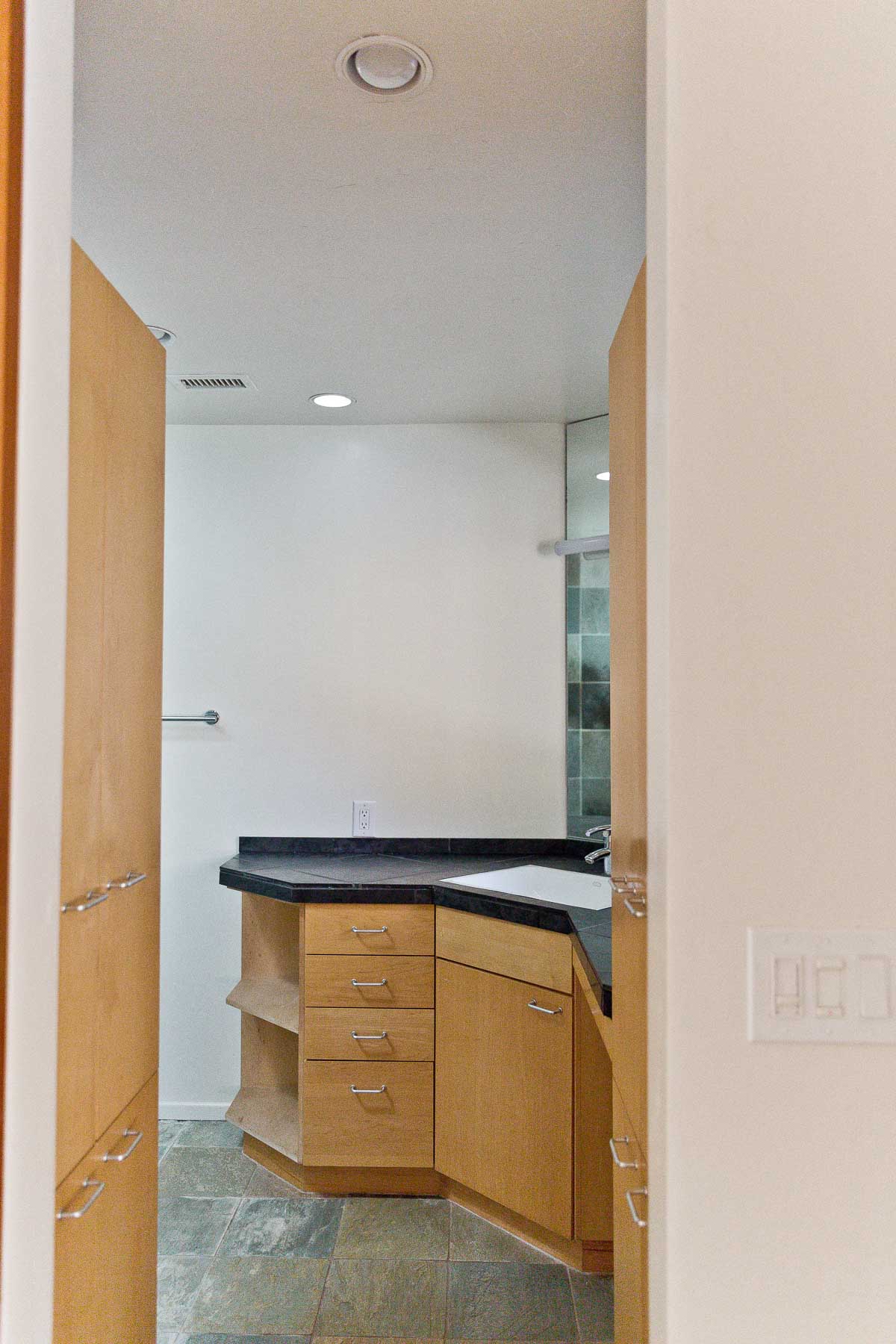 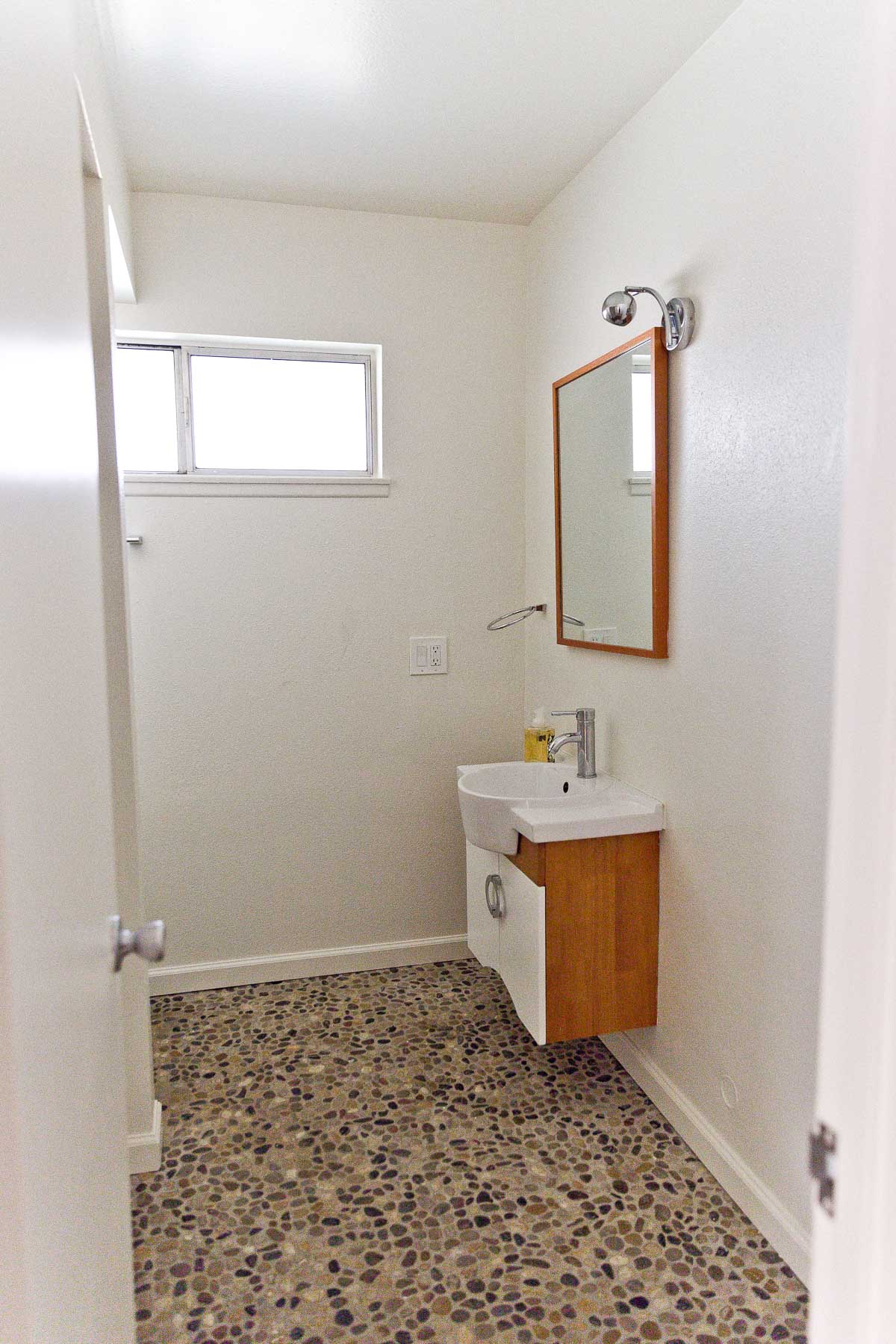 This space is in the backyard and not attached to the rest of the house. Having this extra room for an office was one of the reasons why we made an offer on the house. Because three bedrooms, with both Jeff and I working from home AND a toddler running around felt a bit tight. But with this additional space, it felt doable.

This will mainly be a space for Jeff to work, since he often has meetings, and I’ll be doing a lot of projects in the main house anyway. But we’ll also have a sofa in here, for lounging , so we can all spend time in here after work (if we want to). 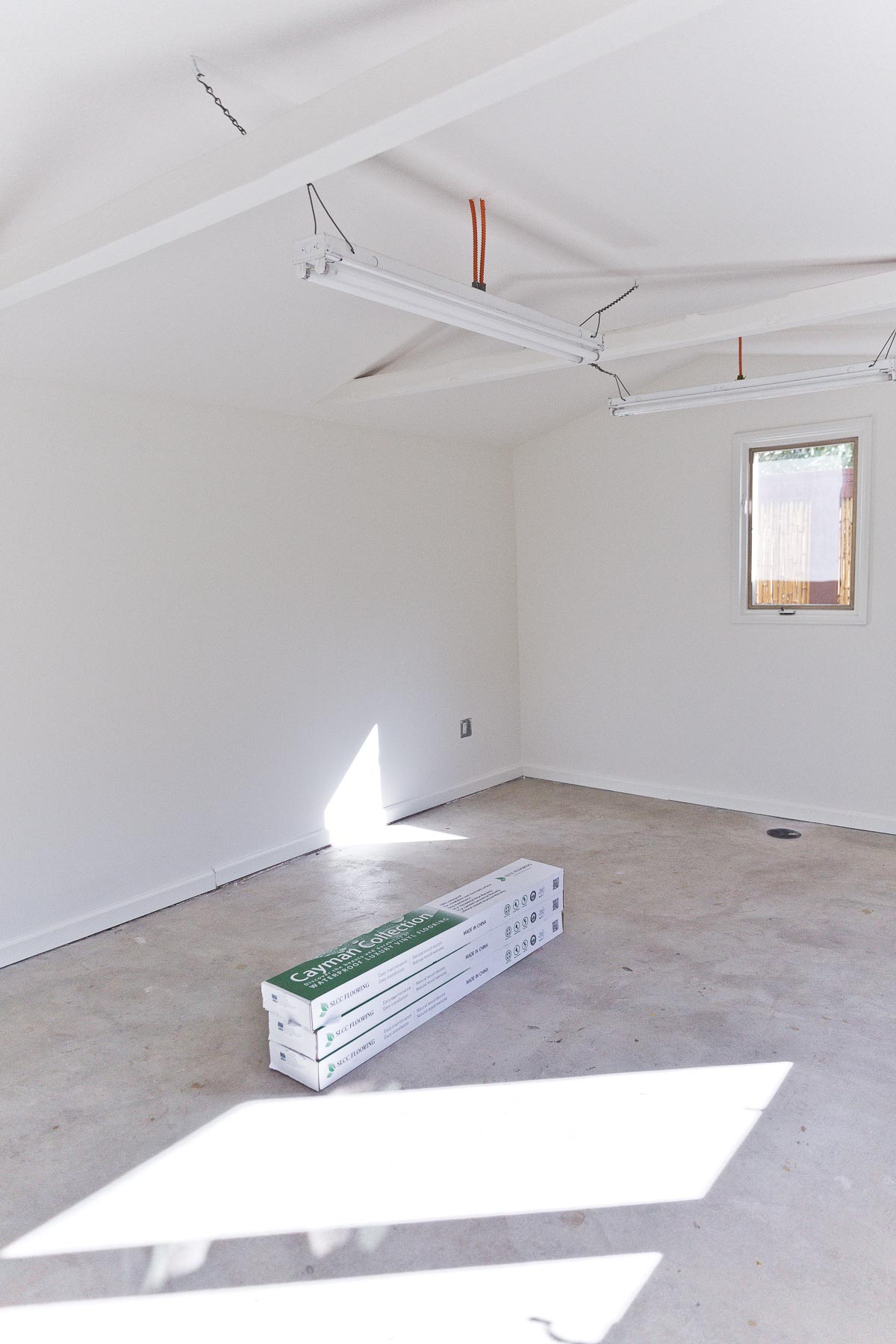 I’ll share more in-depth plans for different rooms as we go through the process of remodeling and decorating each one. We’re currently working on the kitchen. So that will probably be something I start sharing here pretty soon. And I’ve already shared a bunch on Instagram (mostly in stories, if you want a sneak peek – I have it in my highlights under ‘kitchen reno 1‘).

And! I almost forgot that I actually did a video walk through of the entire interior space (and the backyard) on Instagram already, if you wanna check it out.

You can check it out right here: empty house tour of our 60s home!

P.S. Not that it matters, but just as a side note… This isn’t the first house we’ve purchased (it’s our second). But it’s been soooo long since we bought out first house, it kinda felt like we were first time home buyers again. Haha. SO much to do, paperwork-wise, and pre-approvals, and checking employment like soo many times. I had totally forgotten about that process.

So if you’re going through the home buying process right now, I feel you! And if you’re not currently, but would love to in the future, just know that the process feels long and frustrating at times. But then, you have a house and you kinda forget about those hard / frustrating parts that you went through. Kinda like having a baby.

I love what you’re thinking to do with your kitchen. With a space like this, I can imagine an open concept kitchen without the dividing walls a good idea.

I can’t wait to see what you do with this new home. I like the big fireplace in the living room.

Can’t wait to see what you do with this home!