Linen bedding is the best. Don’t believe me? Today I’m sharing how to style linen bedding in your home, two ways. Maybe I’ll convince ya. 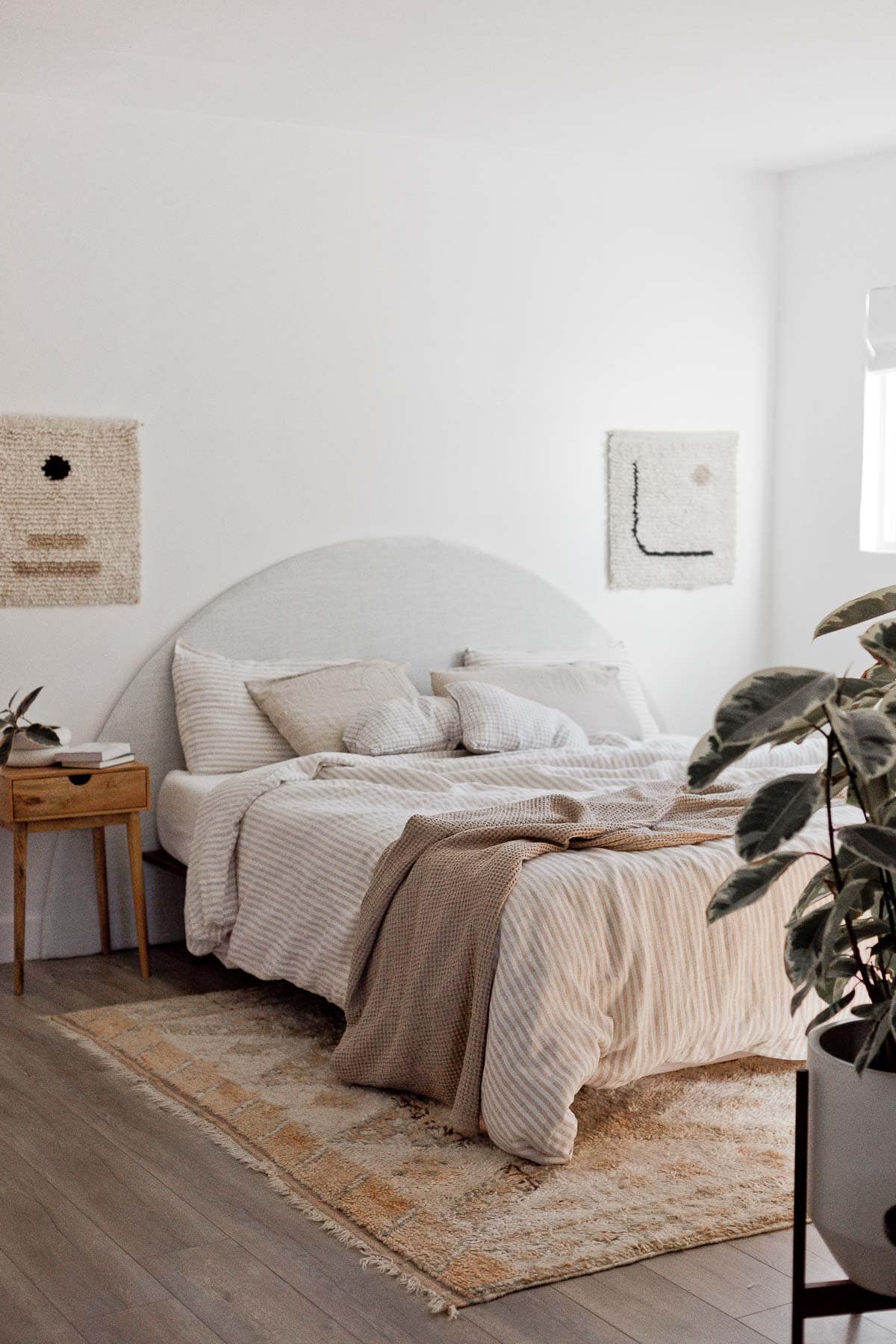 It took way longer than expected, as it always does, but our bedroom is finally starting to come together. DIY headboard and all! And to celebrate, I styled our new Magic Linen bedding two ways to play around with changing up this space whenever the mood strikes.

I have a favorite, but I’d love to know which one YOU like best! So, click through to read on and let me know which look is your favorite.

I’ve been hearing amazing things about Magic Linen for over a year now. And I personally LOVE linen EVERYTHING – including bedding. Specifically because linen is temperature-regulating, which means it will keep you warm in the winter and cool in the summer. So you can use the same linen bedding year round…as long as you wash them regularly. Haha.

And I also just love the relaxed vibe of linen. It has a beautiful visual texture and even looks good wrinkled. Who’s with me?

Anyway, I wanted to be able to rotate two different looks, since we would need two bedding sets for when one is in the wash, etc. So I turned it into a little game and styled the bedding in our newly decorated bedroom two ways. The natural striped linen duvet is my favorite and Jeff’s favorite is the solid natural linen. So, I mix and matched for the two looks. 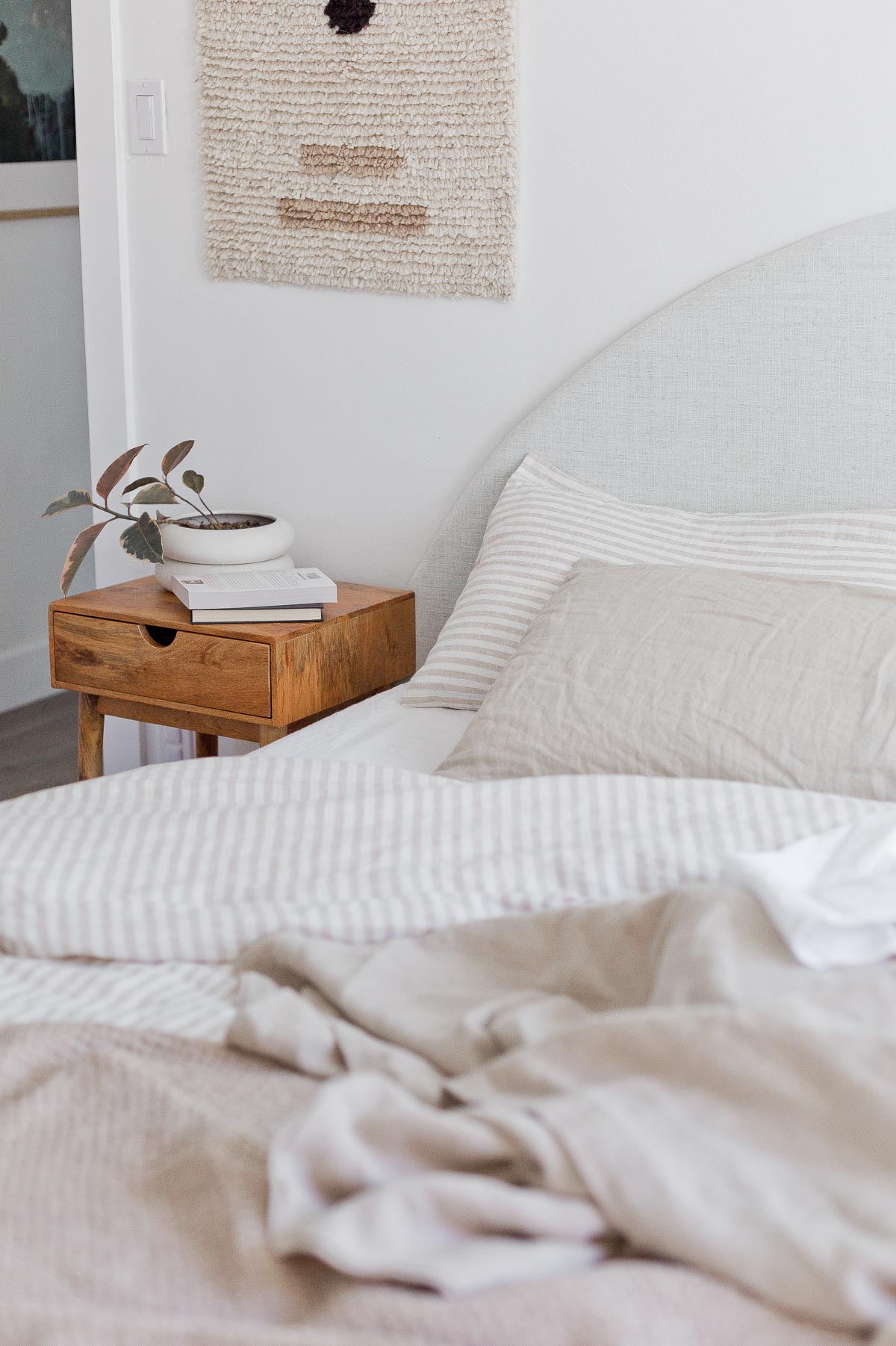 I’ve never really considered getting a striped duvet until I saw this one on Magic Linen. The colors areas  neutral and pretty, but the strip makes it a little more  interesting. I w wasn’t sure what to expect, but I  absolutely LOVE this look! I paired it with simple white linen sheets. And added neutral linen pillowcases, along with a beige waffle throw.

The waffles throws are AMAZING btw! Would totally make a great gift – they come in two sizes. And it’s a warm yet silky feeling texture. I can’t describe it over than to say, you should get one!

To recreate this exact bedding look, here’s what you need. It’s like a recipe of sorts, but for your bed…

**I already had similar grid linen pillowcases, so I’m just including the most similar Magic Linen version, which is almost identical in size and pattern to the ones I have. 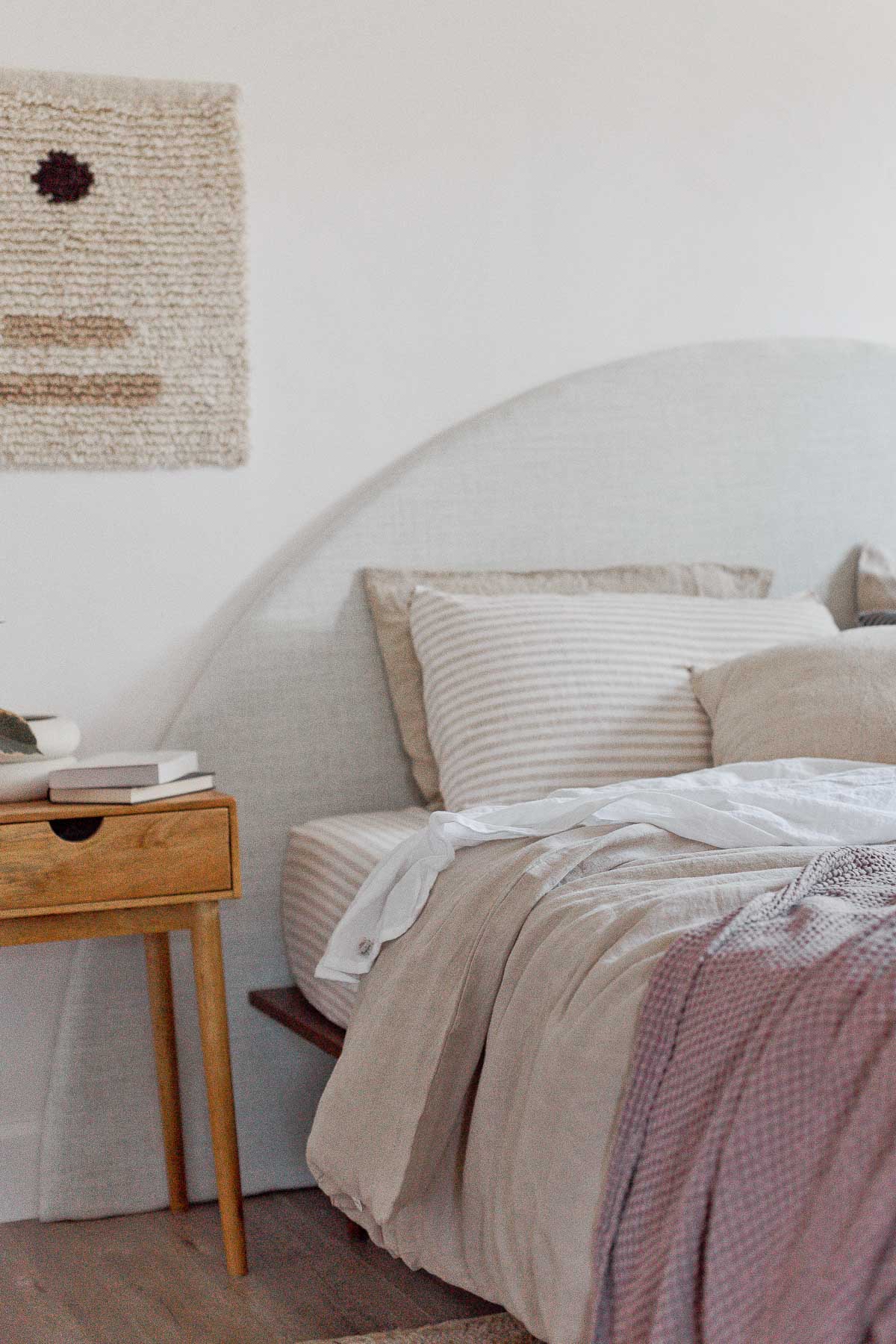 This bedding combo is even more minimal and neutral than the first one. I don’t have as many photos of this version because it started to get dark out quick when I was photographing everyday (daylight savings is killing me with the early darkness rn). But this simplified  option is really pretty too – with a little pop of color in the wood rose waffle throw.

We’ve been sleeping on Magic Linen bedding for about two weeks now and we both (honestly) absolutely love it.

In California the weather changes quickly – from hot to cold  and back to hot, etc. So having bedding that is temperature-regulating, like linen is, has been great. I never wake up hot or cold.

AND it looks so good in here now. The bedding makes a huge difference in pulling together those final touches in the room. Especially in combination with the DIY headboard I made.

P.S. Totally unrelated to bedroom stuff, but I also got a huge white linen tablecloth that I love, if you’re looking for something like that. Magic Linen also carries linen clothing, kitchen and tableware, curtains, fabric by the yard, and more. And I have a discount code for you too, if you wanna take a look. 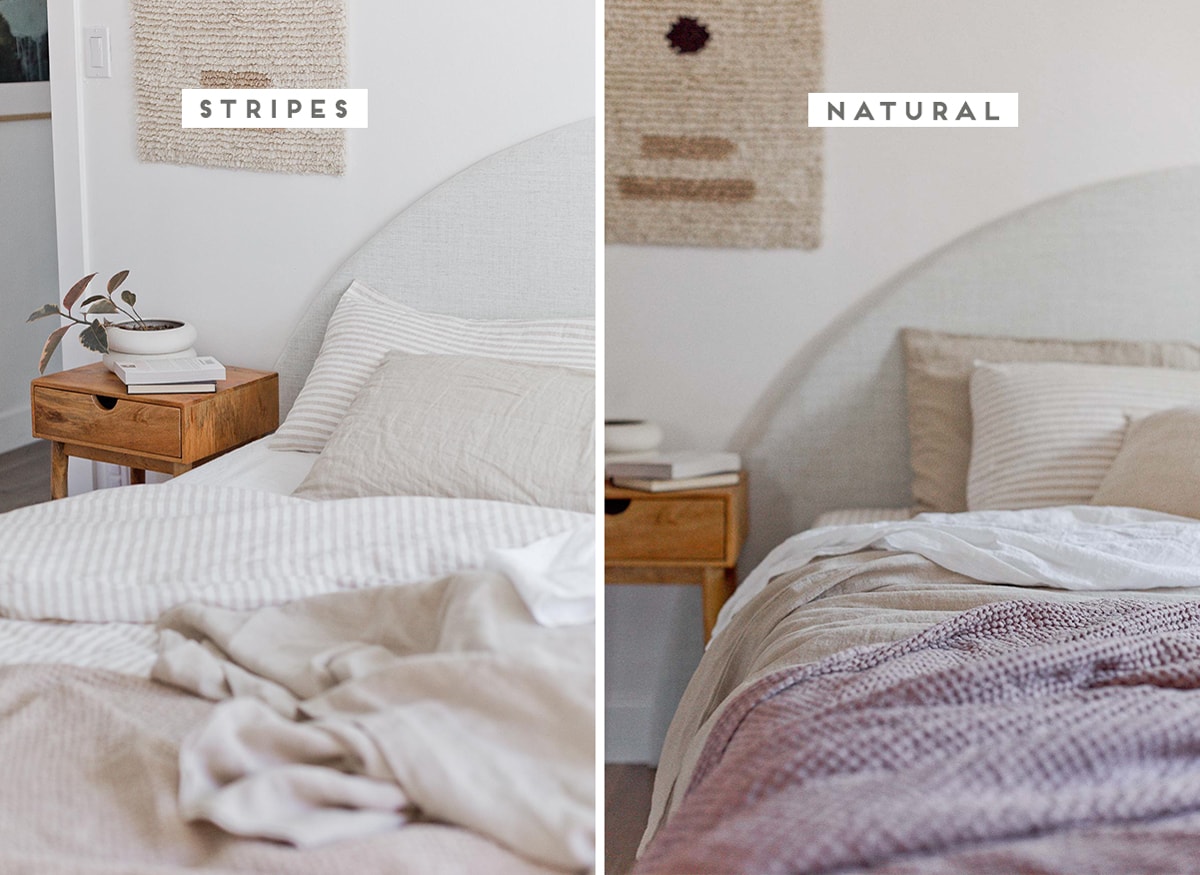 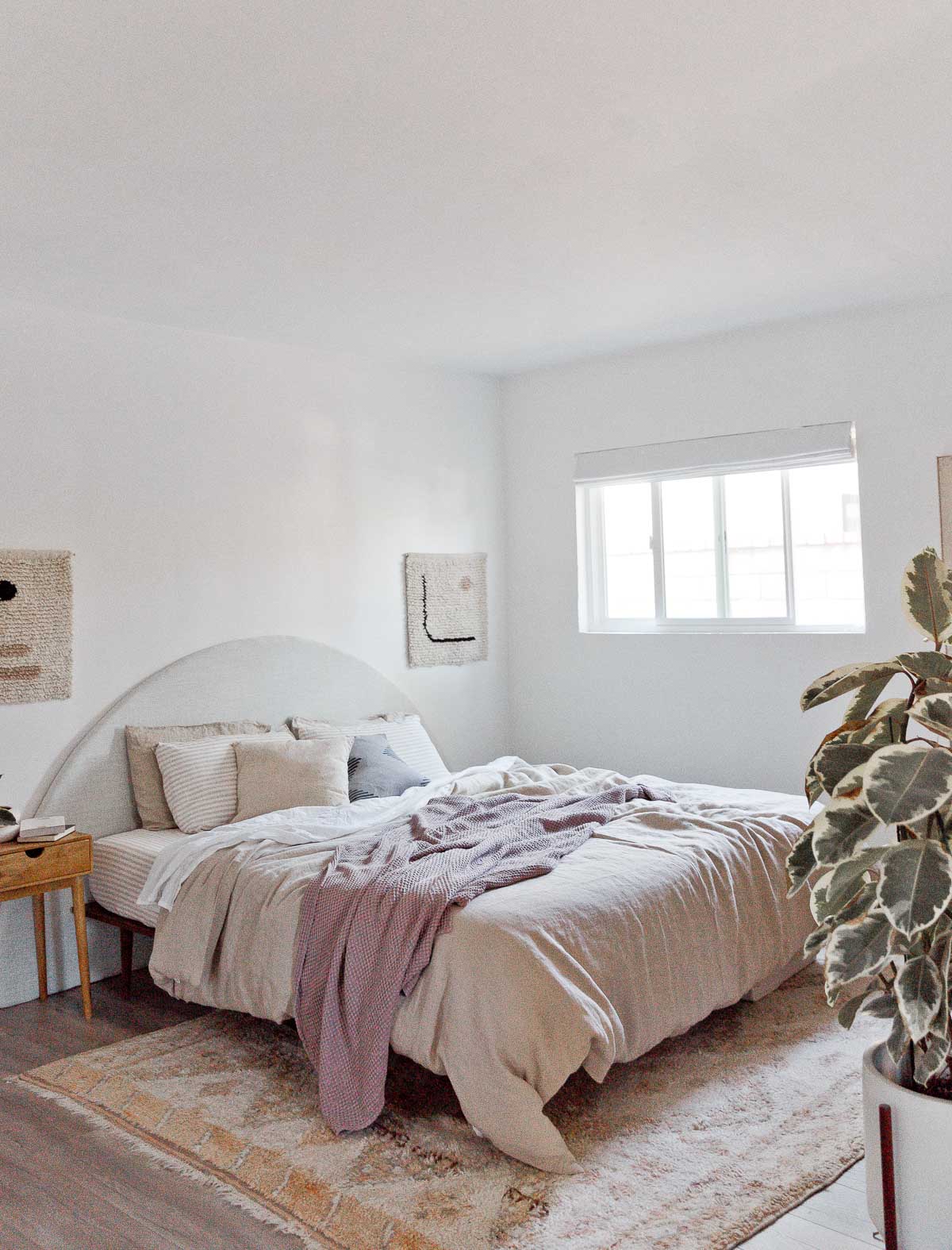 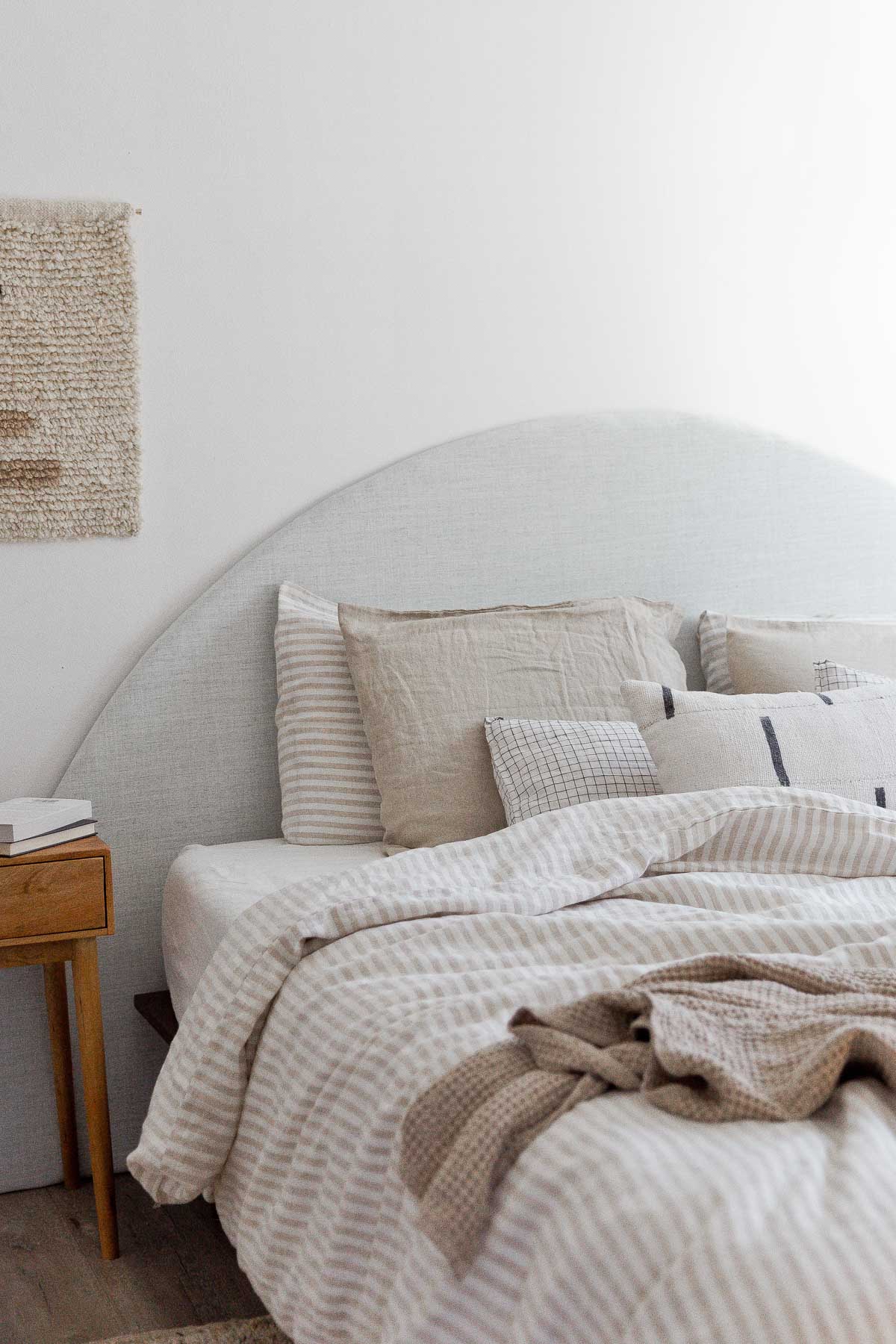 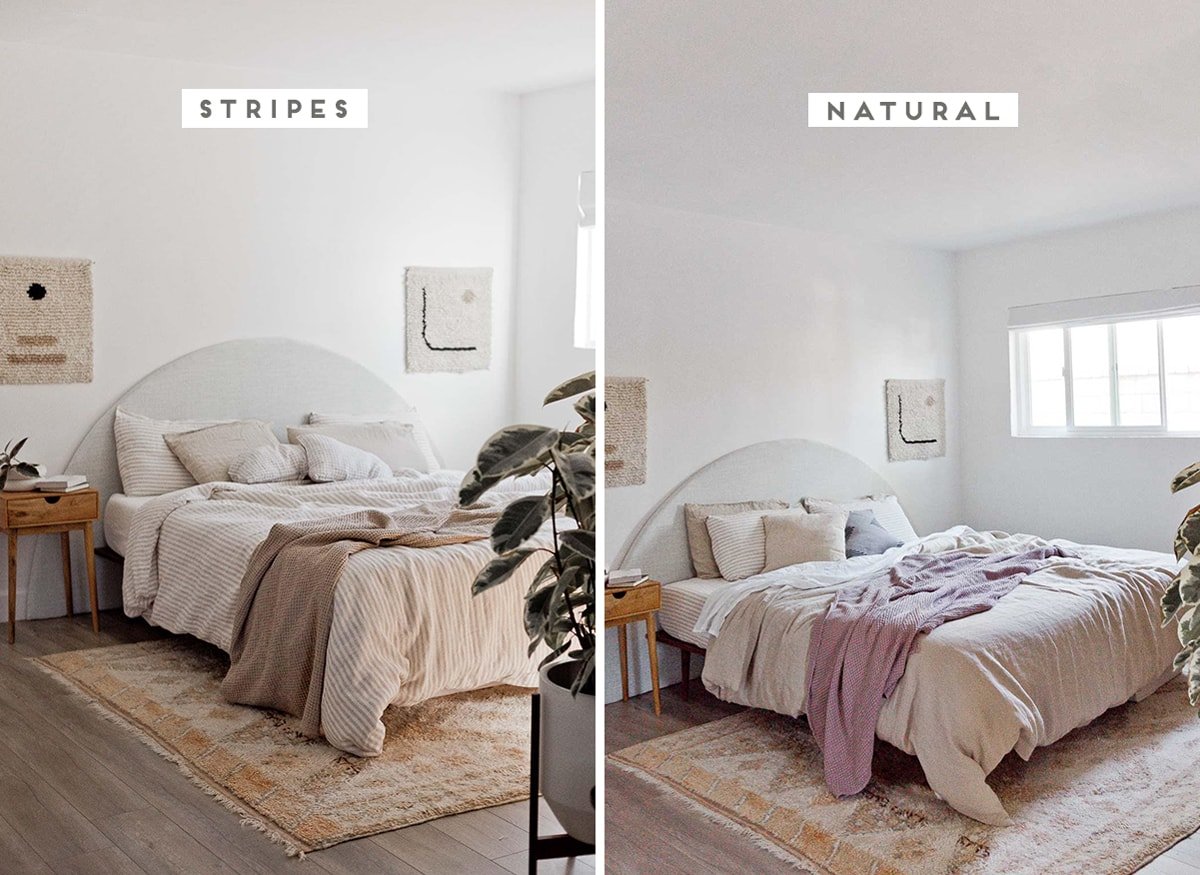 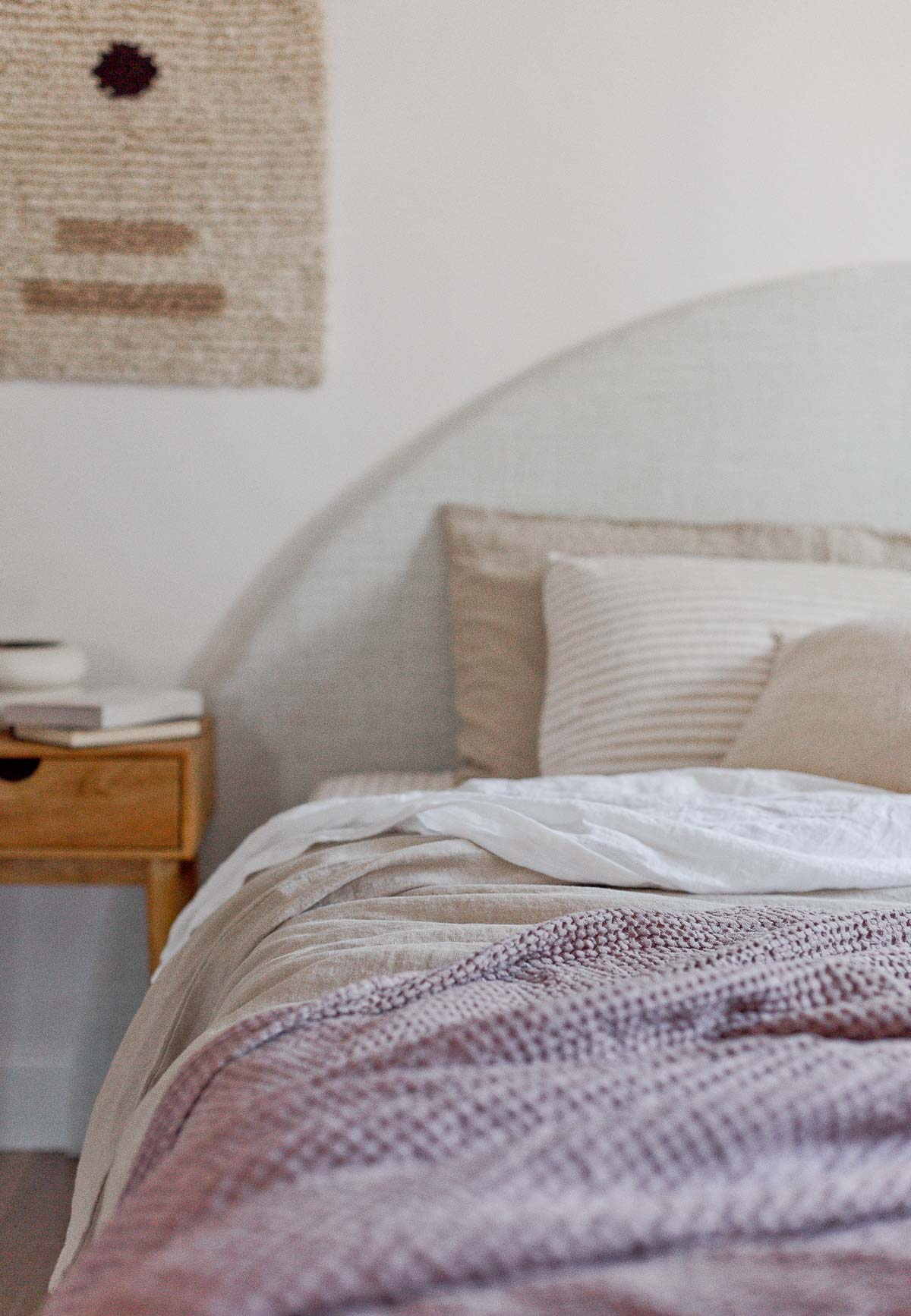 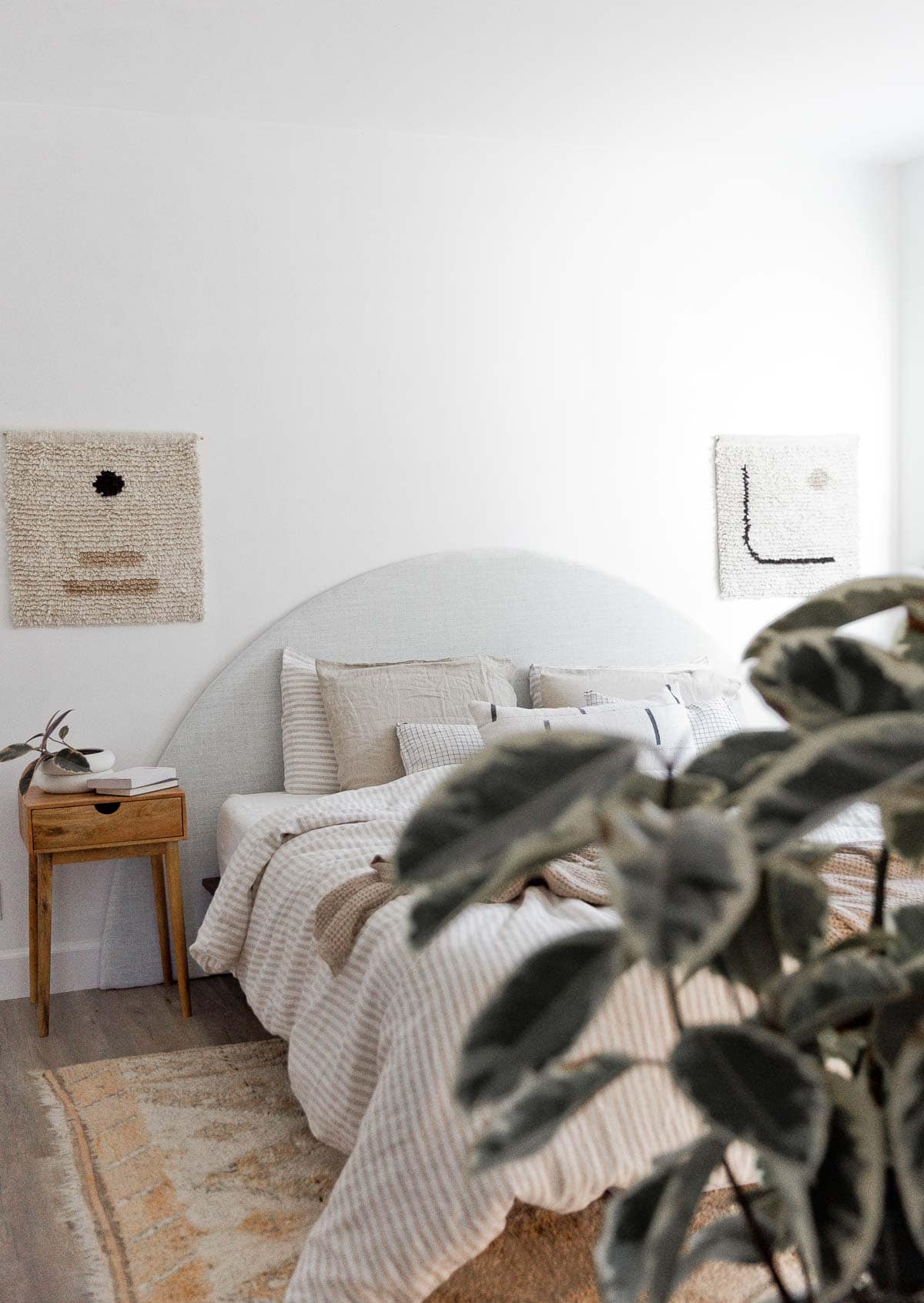 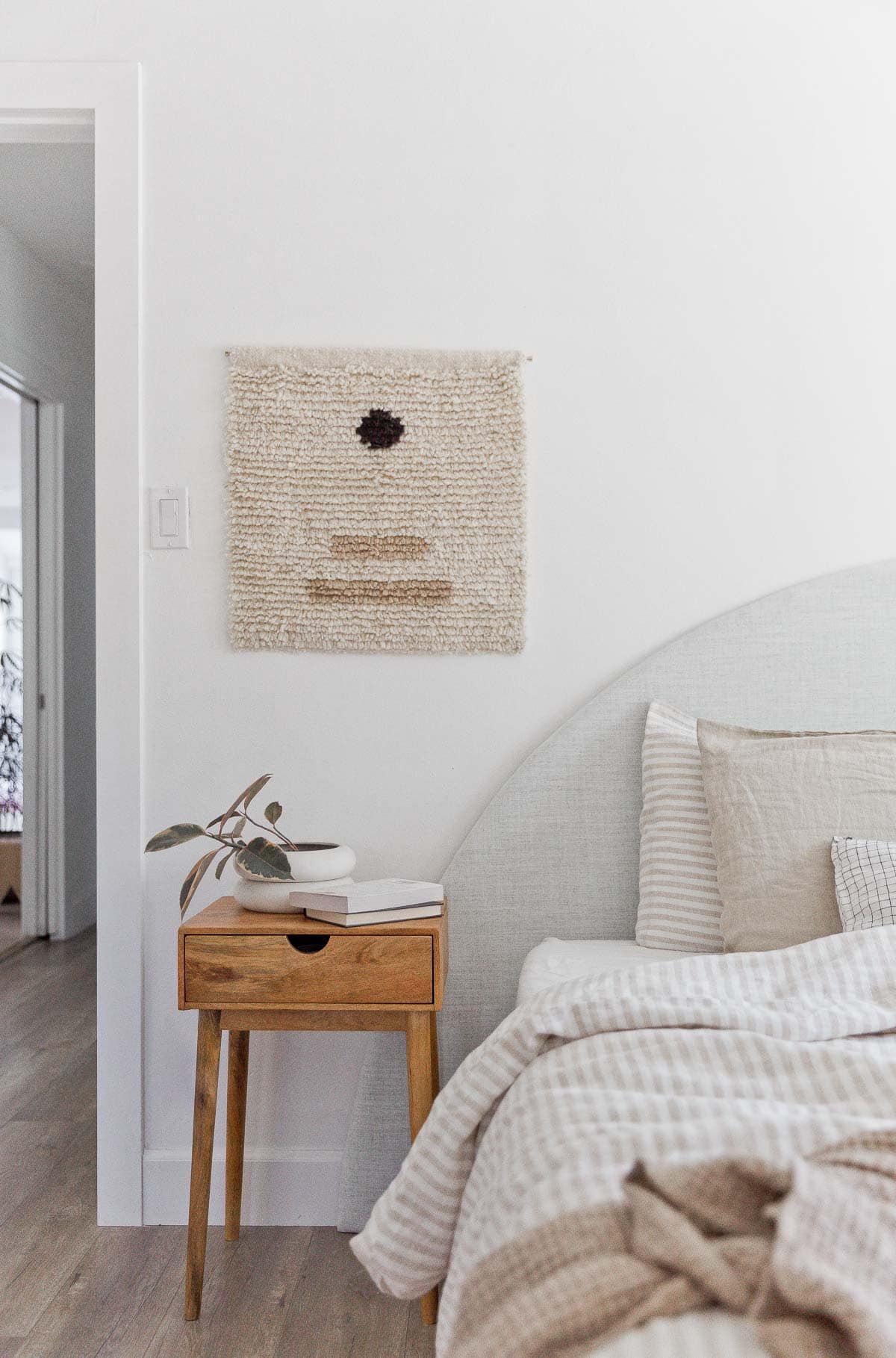 So now that you’ve seen both options, which one is your favorite? Let me know in the comments below. I’d love to hear your thoughts.

Discount code: Use the one magic10 at checkout for 10% off your order at Magic Linen.

This post is in partnership with Magic Linen. All opinions are my own. Thank you for supporting the brands that help keep Paper and Stitch running.

Hi Cindy. Yes of course! I’m working on the tutorial. Just a little behind because of the holidays. Coming soon, I promise. 🙂
-Brittni

Headboard looks amazing! Any chance you could share the DIY instructions? Would love to try it out.

Thanks Jillian. I love the stripes too!

Stripes! Which was surprising to me actually, but the way you put it all together makes it look really calming and not too busy.