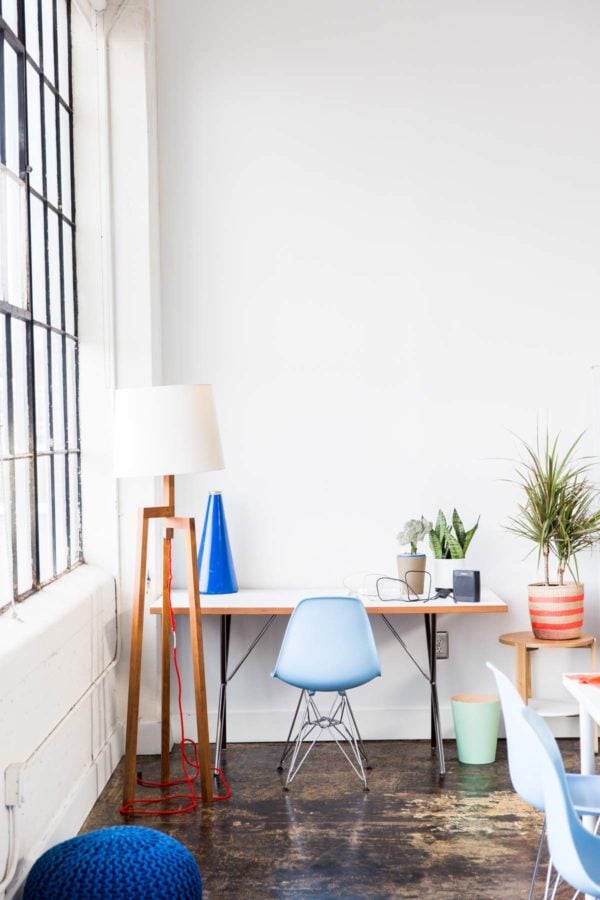 It’s been two weeks now since packing up the old space and moving into the new studio. Time is flying by! No complaints though – it’s been great so far. And even though we’re still trying to get settled in, complete a few DIY projects for the space (like DIY workspace tables), and finish unpacking the boxes, I figured now is a good a time as any to share the ‘before’ photos of the space.

FYI – These photos are not styled…they’re just before photos I took the day after we moved in and shuffled some furniture around (and a couple of photos I happen to snap before move in). I’ll be decorating the space in the coming months and sharing LOTS of photos of that process. These photos are so that we have something to compare the ‘afters’ to later.

Okay! Onto the studio… The new spot is two levels! Which means there is a good amount of space to spread out, which I really, really love. The upstairs is basically a bright white box (which I’ll explain in a minute) and the downstairs has the main workspace, kitchen, bathroom, and storage closet. 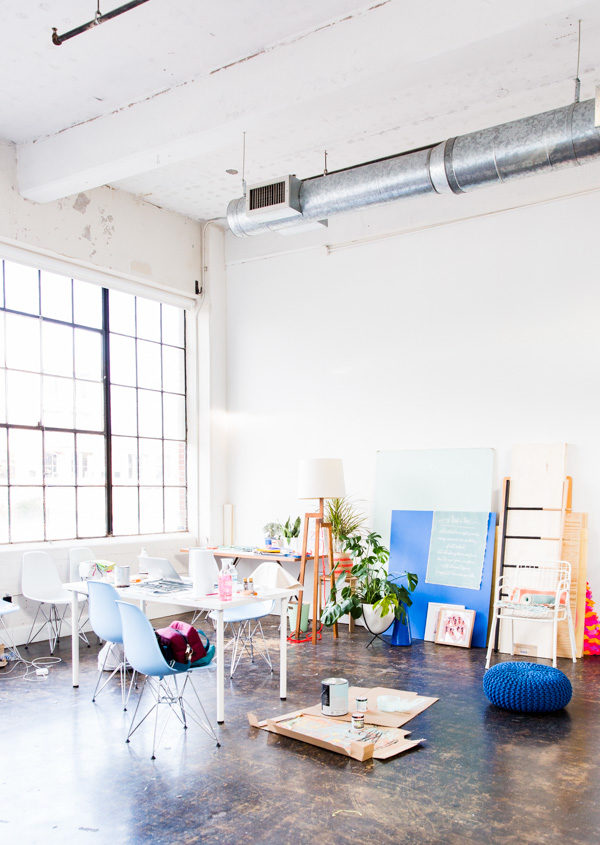 Let’s start with the main workspace…

It’s filled with windows, which I LOVE (keeps me in a really good mood) and is pretty open to the rest of the downstairs. We’ve started setting all of the tables in this area and do all of the crafting in this part of the studio as well. Right now there is no storage in the main workspace, except for one closet behind the kitchen (which is completely full already). So, I’m going to have to prioritize finding some good freestanding storage solutions asap. If anyone has any suggestions, please let me know!

There were a few things that I had done before we even moved in, like having the ceiling fans removed and baseboards painted white. And that has definitely helped to make things feel more open and fresh…all about those little details, right? You can see that change in the photos (I took a few before moving in and some after). 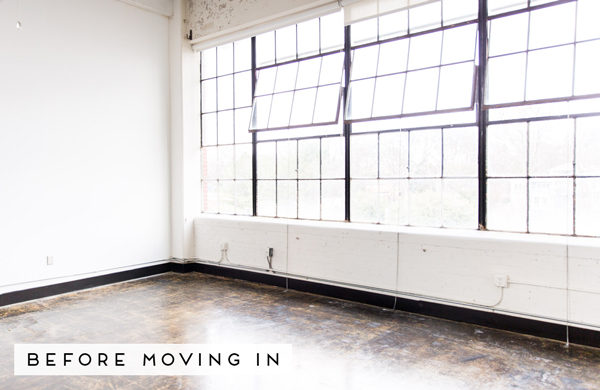 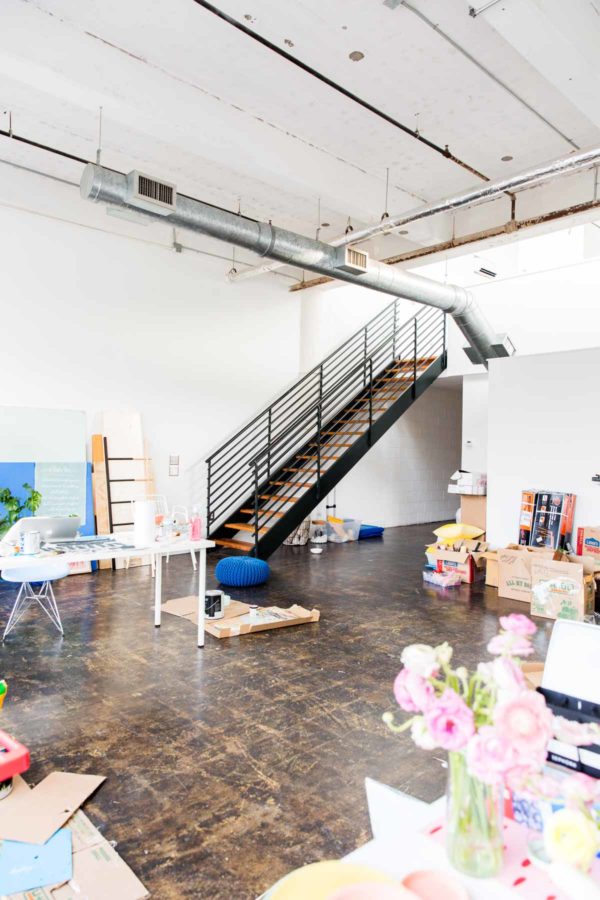 The only drawback to this place, other than the fact that it’s not terribly fun to haul stuff up three flights of stairs when my car is packed with stuff that needs to go to the studio, is that I can’t paint (or do anything) to the dark concrete floors on the lower level. Since the building is a 1930s factory with some history, the floors are one (of very few things) that can’t be changed.

I don’t hate them, but if it were up to me, I would definitely change them. Ideally, painting them white or covering with hardwood flooring. Both are no-gos from the landlord, so the dark floors on the lower level will have to stay. And I’ll just find some cool rugs to warm things up a bit. Luckily, the upstairs is all white, floors included, so I kind of have a little bit of both worlds, which is nice. 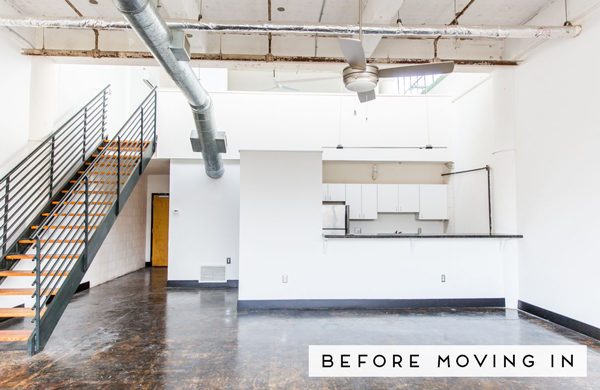 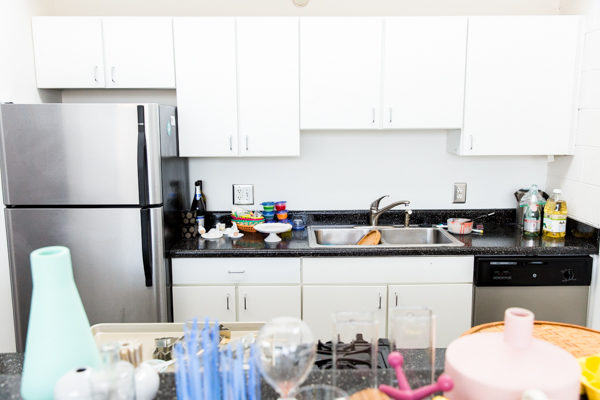 I have plenty of plans for the kitchen, which I hope will be done sooner rather than later. But for the time being, it’s not awful as is. My plan is to remove the tower-y wall on the left and extend the length of the kitchen countertop, upgrade the cabinets, replace the sink and appliances, and do a tile backsplash.

Oh! And I need to figure out something in the lighting department in the kitchen as well. I really don’t care for the hanging track lighting. 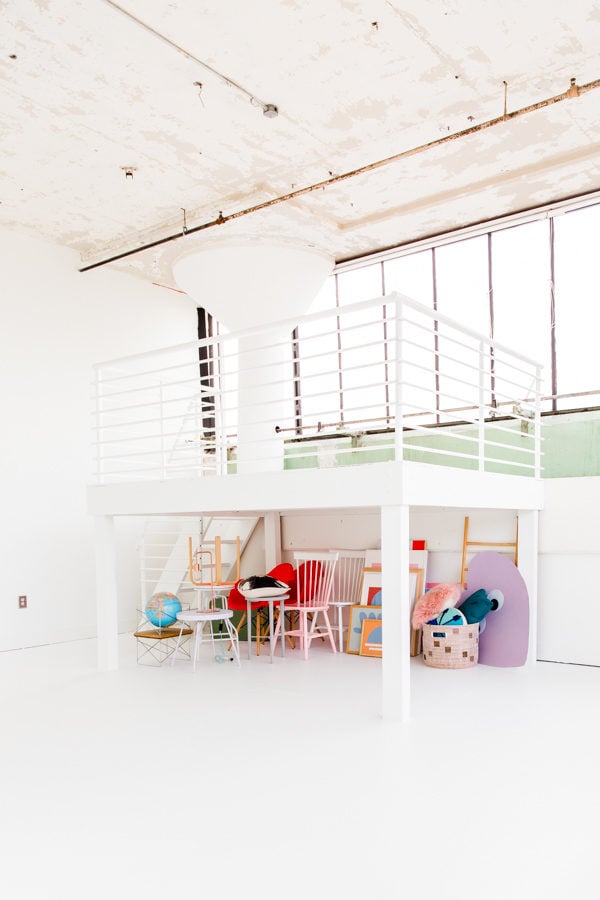 The upstairs is where we’ll do a lot of shooting (I think – we haven’t used it much yet, but that is my hunch), so I don’t plan to decorate as much up there. I want to keep the majority of the area blank up there and have storage along the half wall by the stairs and underneath the platform.

When I first came to look at this unit, it had black floors, a semi-inclosed closet, and a peculiar platform thing. So, before moving in, I had the floors and base boards painted white, along with the platform, and a railing was added too, for safety.

Aesthetically, the platform isn’t much to look at, but I think it’s going to be great for small tabletop photos, since there are lots of windows up there. So it stays. Underneath the platform, I’m storing extra furniture and large props. And I’m hoping to have some custom shelving made too, to really make the most out of that unused space.

And that’s it for now. I don’t have any photos of the bathroom or storage closet to share because I’m not sure I’ll be making any changes there, so for now, it’s probably not worth photographing. But if that changes, I’ll be sure to add more before photos. 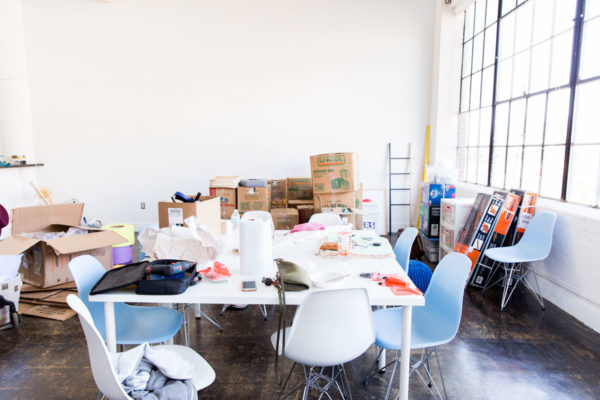 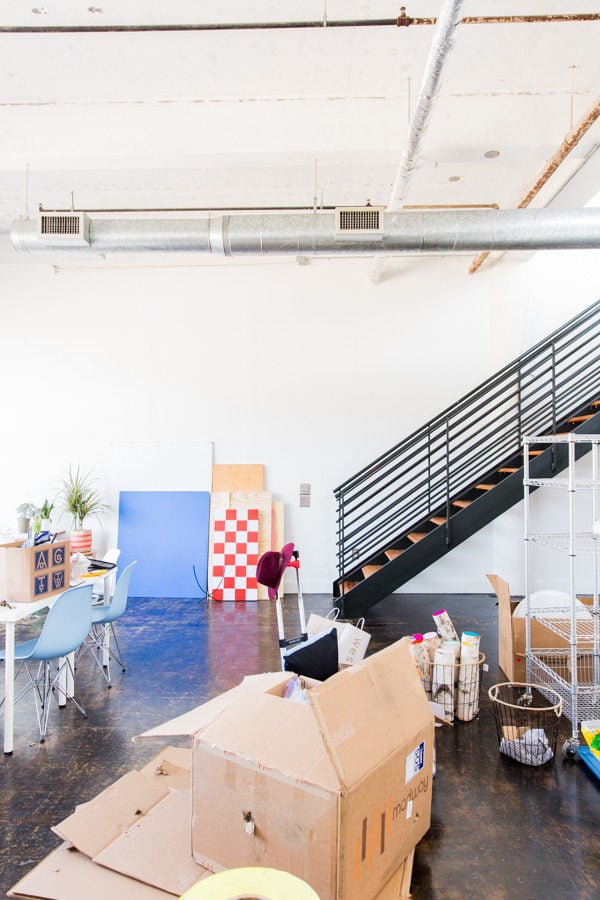 What do you think? Have any suggestions for me on the new place? What would you like to see here? Any particular DIY projects, etc?

< previous postFlower Power: How to Create a Colorful DIY Spring Bouquet
next post >21 Easter DIYs to Try This Weekend

Congratulations! What a beautiful space!

OMG. I want to work there. It’s beautiful! Congratulations on finding such an amazing space. Miss you! Xoxo

Wow what a dream! The space looks incredible – sure to create some amazing things there. Congrats!!

Brittni, Wow, this space is amazing. I can’t wait to see how it all comes together. Pat S

This looks so bright! Beautiful light and looks really creative! 🙂

How exciting! Your studio looks so bright and inspiring! I love what you have done with the place, and can’t wait to see what you have in store next!!

I love starting with a new, clean, fresh space to work with!

omg! This is literally home decor goals! Love the industrial thing going on and like the colors going on! It all comes in together so well, the wall art is gorgious!

I’m so excited for you, this studio looks heavenly (especially that much space, I would love to have that much). The upstairs part os just perfect for photos, I am indeed a bit jealous. This looks so great!
https://www.makeandmess.com/

Thanks for the suggestion Kate. Ikea is definitely on my list for storage, amongst a few others.

IKEA. Ikea has the best ideas for storage ever. Especially standing wardrobe closets. They have about a MILLION different choices too, and usually you can have them install it, just in case you dont want to carry boxes up three flights of stairs (no thanks!) Your place looks like an awesome space and the floors are kinda cool, at least a conversation piece for sure. Maybe you could find some interesting photos or information about the factory…

Thanks Kimberly! It’s definitely been a welcomed change from the old place.

Oh Em Gee! I want to move in. Your studio is a photographer’s dream. The lighting looks so even. I can’t wait to see how you decorate it!

Awesome Rain. So happy to hear that!

Love the new studio!! I’ve been waiting for this post because your snaps are exciting! Number one fan from the Philippines, here 😉