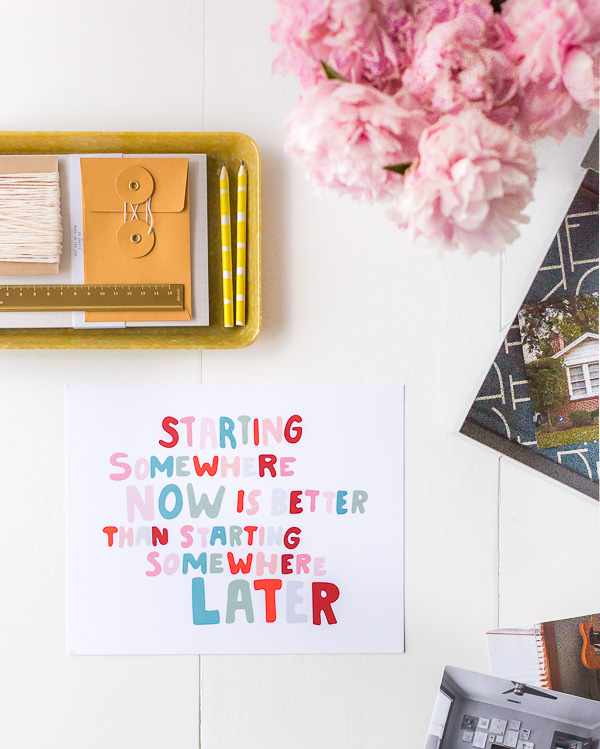 This post was sponsored, and paid for, by SunTrust Mortgage. All opinions are my own.

About ten years ago, before Jeff and I were even engaged, we bought a house together in Jacksonville. We still own that house actually, but have been renting it out since we moved away five years ago. At the time, I was 22 and it felt incredibly exciting to be buying a house at that age, but also completely nerve-wracking at the same time. Because neither one of us had gone through it before or had any idea what the process of buying a home was like – getting approved for a home loan, locking in interest rates, a down payment, yada, yada.

Luckily, my mom had previously been a real estate agent (she lived in Michigan at the time though) and also knew the drill from buying houses for herself in the past – which was really helpful. But if we hadn’t had my mom to lean on with questions, I’m not sure what we would have done.

I imagine that’s how MANY first time home buyers feel too, which is why SunTrust Mortgage created a guide to home buying to make it easy: Your Guide to Home Buying. The guide goes over the home buying process from A to Z to help buyers understand the ins and outs of the home buying process. Hallelujah! I read through the whole doc the other day to make sure it was easy to understand and seriously learned a few things that I didn’t even know. Definitely worth bookmarking if you’re thinking about buying in the future. 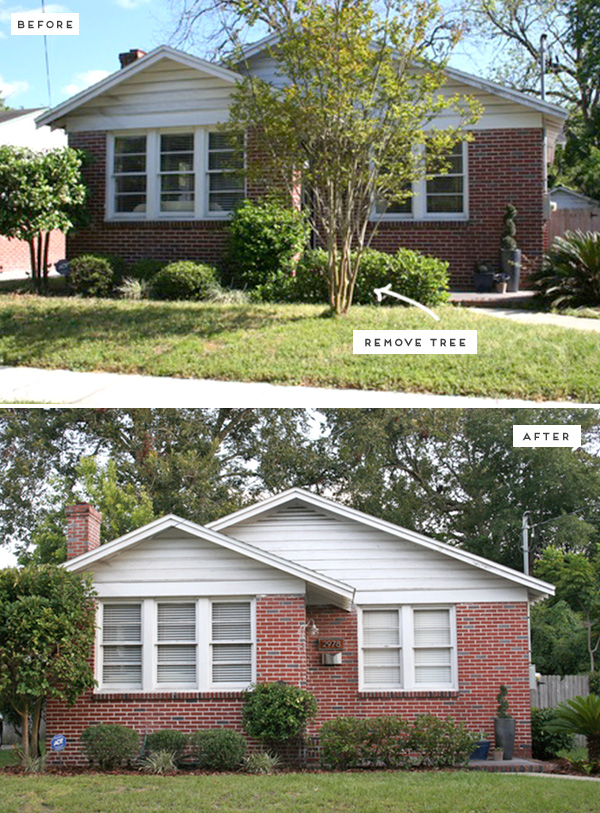 After we fully committed to the idea of buying a house together, we looked at a lot of houses in our target neighborhood (Riverside). Probably 20? And there were a few that had potential, but with our budget at the time, the vast majority of homes we saw needed a ton, and a do mean a TON, of work.

I wasn’t at all afraid of those types of houses because growing up my parents renovated every house we ever lived in. I was used to the idea of a fixer-upper to a certain extent and liked the idea of building up equity in a home too, if we could make improvements that increased the overall value. At the time, Jeff wasn’t quite as onboard with the idea of having to make improvements (that we didn’t necessarily know how to do ourselves), BUT he was open to it. Kind of.

After a month or two of looking, we found a small(ish) house in our favorite neighborhood, that we could actually afford. It needed some work, and it wasn’t very large (just over 1,000 square feet), but the necessary projects were fairly minimal and there was great natural light in every room plus a fenced in backyard and hardwood floors (which were all on our must-haves list). So, after a couple of days of nerve-wracking negotiations, a series of inspections, and a whole bunch of other stuff, we were finally homeowners, about 30 days later.

I remember the day we got the keys, we were both so excited. We walked though the empty house for the third time ever and made all these plans for what we wanted the house to be for us – renovations to the kitchen, painting all 1,000 square feet of the interior, eventually gutting the bathroom, etc, etc. 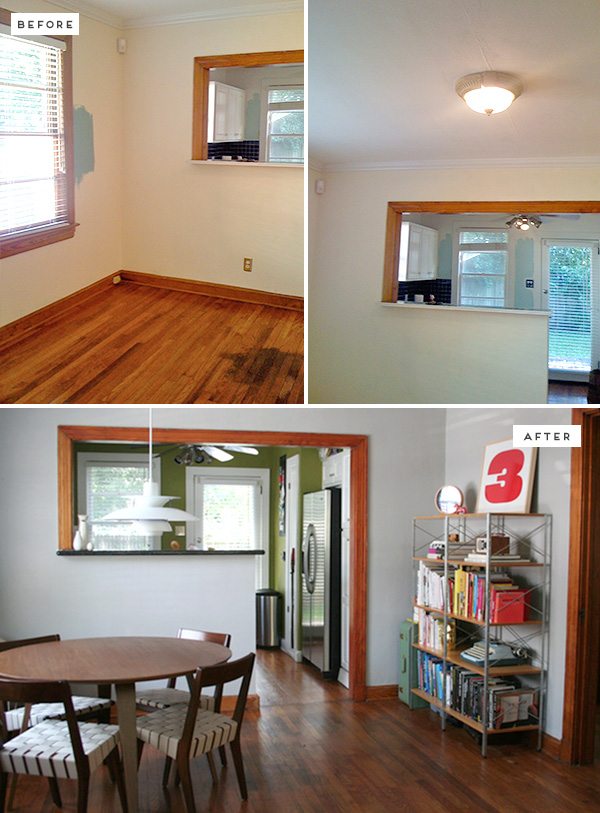 There was a lot of work to be done for sure (and some of it still hasn’t been completed), but it was ours and it felt like home. Actually, that was one of the first things I said when we walked through the house during the second viewing, before we made an offer. There were plenty of things about it that I didn’t love – the dark wood trim, the small / dated bathroom, the ugly light fixtures, cramped kitchen, etc, etc. But despite all of the cons, for whatever reason, that house just felt right for both of us.

When we moved in, we had the roof replaced (which we had worked into our deal for the house since the inspector didn’t have good things to say about it), painted every room, replaced the washer and dryer, fixed up the fireplace area (Jeff’s dad made us a new mantle and we had the tile around the fireplace floor replaced with something more neutral), and switched out all of the lights and ceiling fans.

About a year after that, we updated the kitchen – in the most budget-friendly way possible, I might add. I think we spent $2,500 on the new counters, subway tile backsplash, undermount sink, new faucet, etc. And looking at it now makes me want to scream a little because aside from the sink and backsplash, we would do things VERY differently now. Black granite and green walls?! What were we thinking?!

Whenever we decide to put it on the market again though, we plan to make some changes to the kitchen and bathroom. So, at least I’ll be able to redeem myself at some point. Fingers crossed. 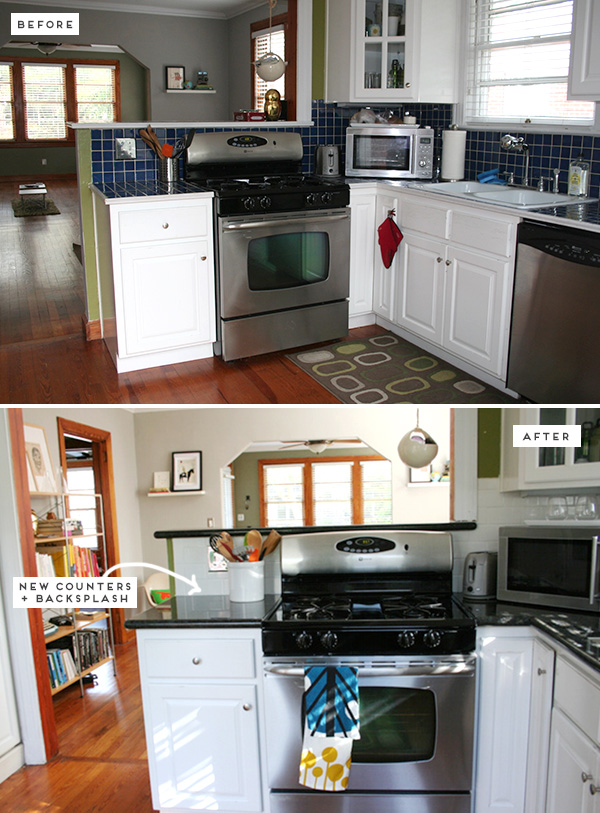 Other than that, it was a really great first home for us, with so many memories. That was the house we were in when we got engaged (sitting on the couch after a little bit of an argument – we keep it romantic over here folks. ha!) and then married a year later, etc, etc.

It was, and will always be, our first house and while it’s far from the top pages of Pinterest, it was/is ours. And the before and after photos were taken nine or ten years ago at this point, so I feel like maybe I get a little bit of a pass on some of the design decisions and photo quality. 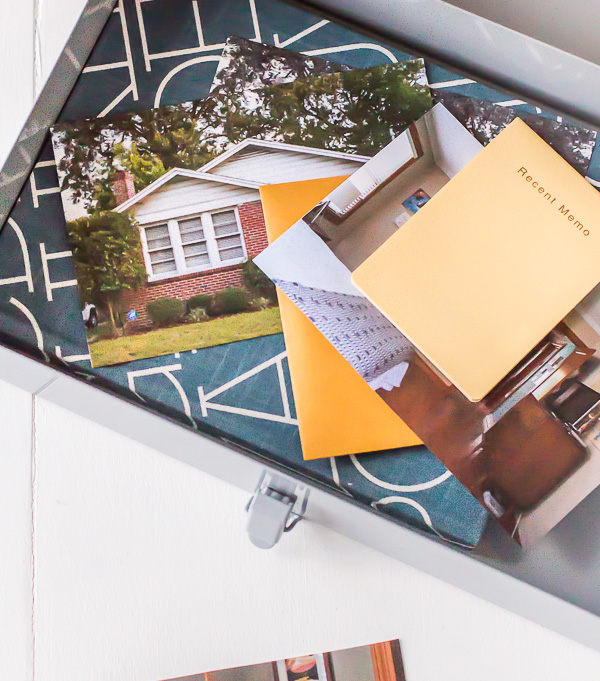 If you’re thinking about taking the leap to buying a house (how exciting), definitely head over to SunTrust Mortgage and check out the home buying guide they created.

Do you own a home? What was your first home buying experience like? And if you don’t own a home just yet, what would your dream house look like? Curious to know!

Wow. new roof, better kitchen, new mantle, and new paint. All of that goes a long way to make your home more comfortable. You must have a lot of energy. My dream home is more about location. I love the idea of living on a mountain. You know, a quaint country area.

Totally Michelle – that is one of the best parts of owning a house (in my mind anyway)….all that space to decorate / renovate / etc.

When I see all those pictures and read about all your decoration projects I really really want to get a house, especially because of all the space you have to decorate it! I still feel a bit limited in my apartment, although it’s not that small either.
https://www.makeandmess.com/

Thanks for sharing your story, Sunny. I love that you were so determined to buy a home that you sold your car to make it happen. Our first home definitely involved some sacrifice to make it work too. And that’s one of the reasons why it’s so special now, looking back on it… Even if I only have incredibly dated photos to show for it, it was a pretty great first house for Jeff and I. 🙂 I just can’t wait to buy a house again, when we’re ready. I’m dying to get some new room makeovers started.

We bought our first home, a townhouse, a year after we married. I sold my car to make the down payment, and we drove to work together (one town apart) for a few years after! It was down the block from my folks’ house, which was actually good… no one dropped in without calling, and it was a time I remember fondly. As I recall, our mortgage interest rate was 10%!

Thanks Shareef. I can’t remember the artist who created the print, but I bought it locally in Atlanta…at a shop called Archer Paper.

I wish I still had photos of my first house. How sweet to be able to share the makeover process. I love that print by the way. Where is it from?