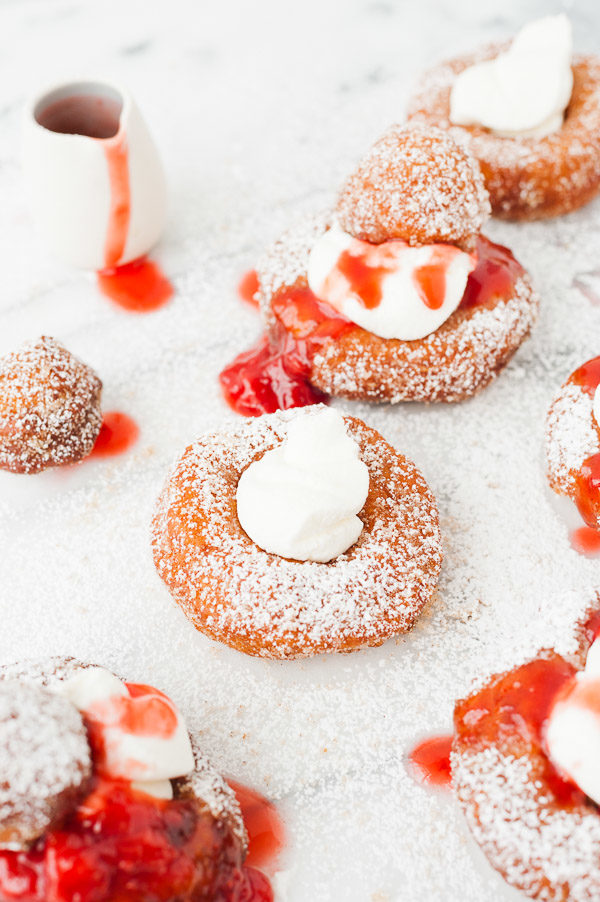 When I was in Scottsdale, we had breakfast at the hotel a couple of times and one of those times we ordered french toast. If I’m being honest, the french toast itself was kind of average.

BUT the light at the end of the tunnel was a huge dollop of mascarpone cheese that they put on top. DELICIOUS! It totally made the french toast. I don’t think I had ever had french toast served that way before, but I pretty much confirmed that I’m never going back. Loved it!

Long story short, that little Scottsdale breakfast eventually led to today’s recipe – with a donut spin (in celebration of National Donut Day which is in just a few days)! French toast donuts with mascarpone cheese and fresh strawberry drizzle. Click through for the recipe. 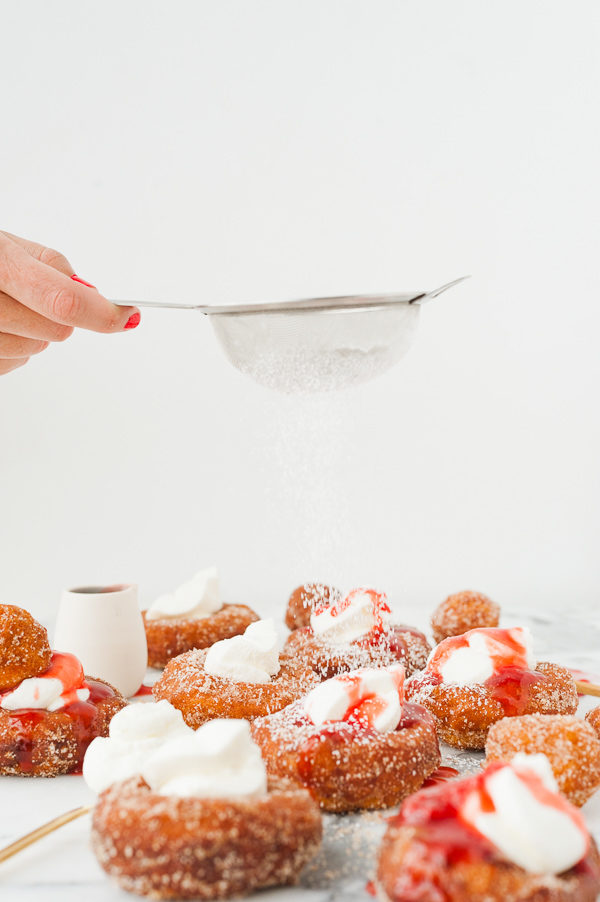 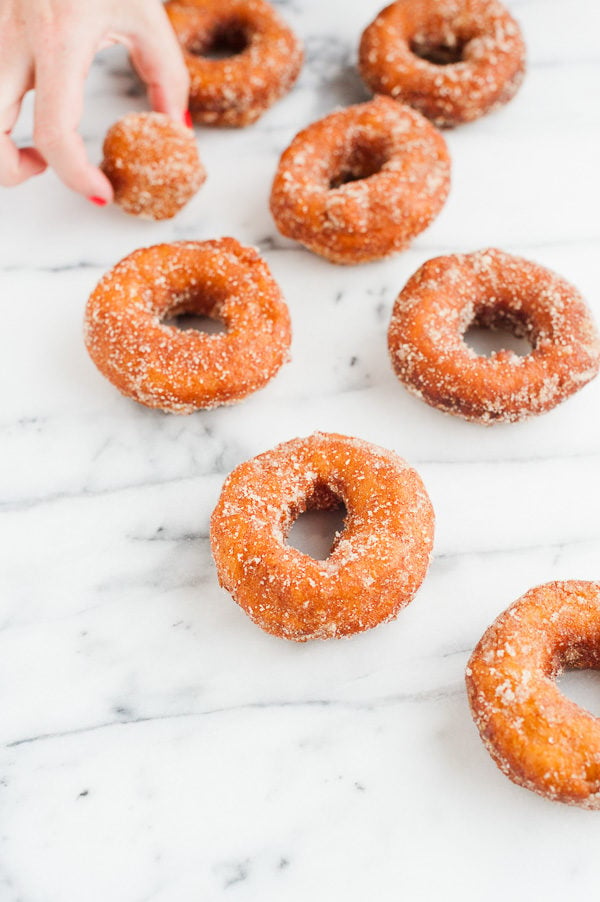 Next, take the strawberry topping off of the heat and smash the berries with a masher. Pour into a bowl and set aside.

Start to heat the oil in a pot or a deep skillet to 375 degrees. You could also use a deep fryer.

While the oil is heating prepare the donuts by using a small circle cookie cutter to cut out a center hole in the biscuit dough. Save the circles that you cut out because that will be used as the donut holes.

Next, prepare the cinnamon sugar by mixing together 3/4 cup of sugar and the cinnamon until well combined in a low shallow dish.

Then, once the oil is heated, place no more than 2 donuts or 4 donut holes into the oil and fry for roughly 7 minutes, while rotating, until it is golden brown.

Remove the donuts from the oil and let them drain on paper towels to catch some of the extra oil then roll in cinnamon sugar.

Then, top the donuts off with a dollop of mascarpone cheese, strawberry topping, and a little powdered sugar (optional).

*For a creamier topping alternative, whip roughly 1 cup of heavy whipping cream with a mixer and add a 1/2 cup of mascarpone cheese, being careful to not allow the mascarpone cheese to curdle. I like this option a lot because it’s easier to pipe into the hole of the donut using a piping bag or plastic bag with the corner snipped. 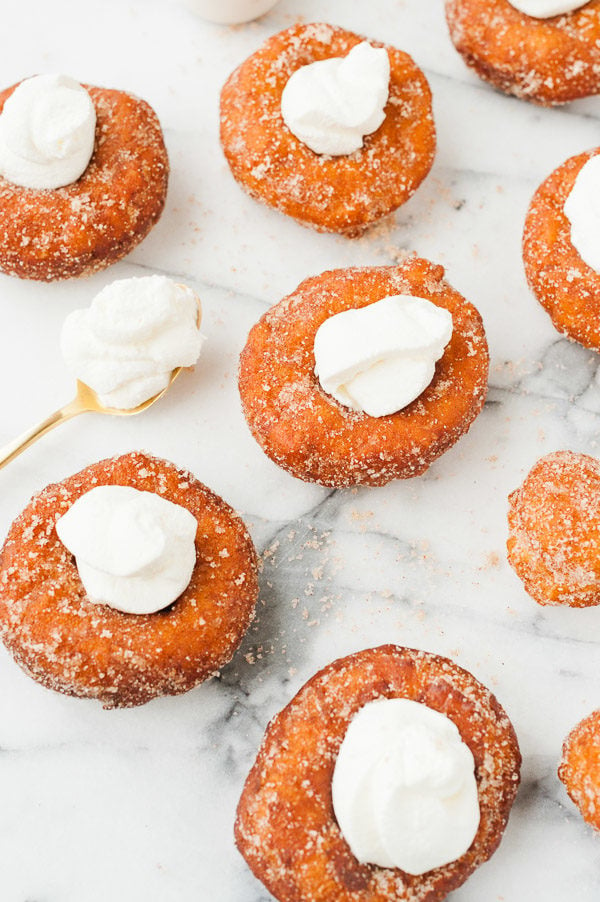 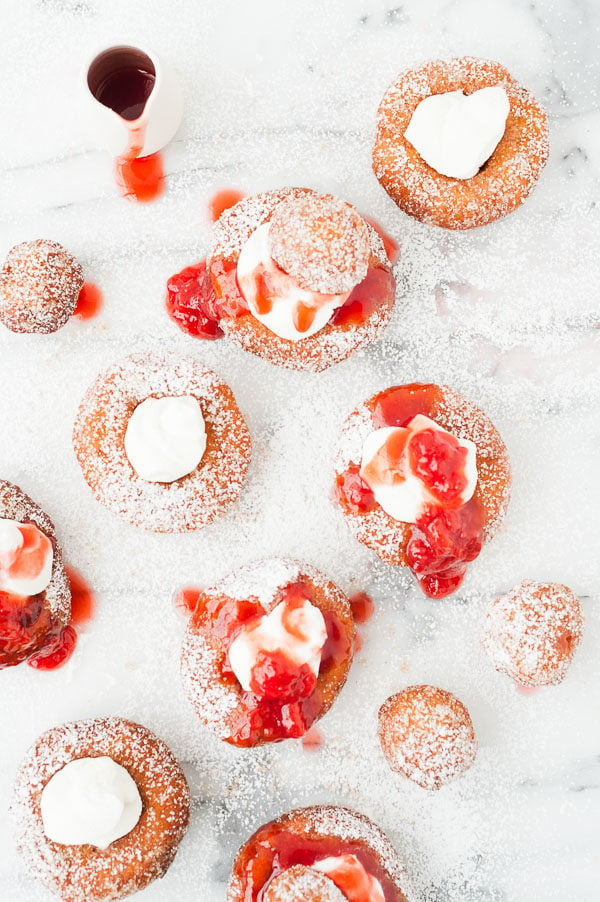 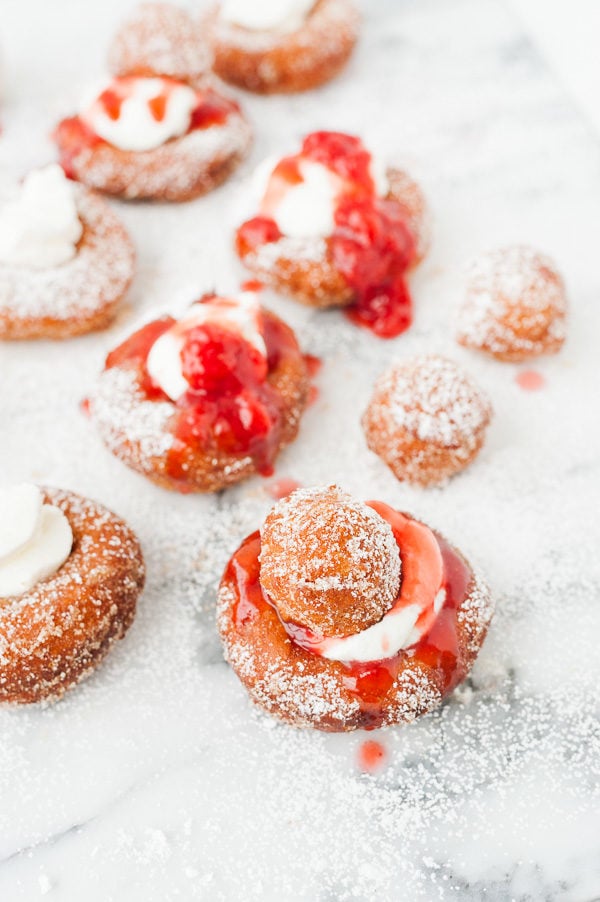 P.S. I’m in France right now…Paris to be exact and even though french toast apparently didn’t originate here, it feels fitting for today’s post.

Think you’ll give this recipe a try? Are you a french toast fanatic like me or is it one of those things you could take or leave? Curious to know.

Now this looks absolutely amazing! Definitely going to have to try this one out!

Sounds awesome can’t wait to make for my grandbabies and strawberries are in season right now here too.

Haha. My apologies Kimberly… Though these are definitely worth trying. Yum!

What are you trying to do to me, Brittni?! And, specifically, my mid-section? I am a TOTAL french toast fanatic! That or Belgian waffles. I actually woke up craving french toast and plotting where I will take myself to brunch this week. Add donuts into the mix, and I’m done! I love that this recipe looks easy peasy and doesn’t require you to make your own dough. Totally putting it on the list!