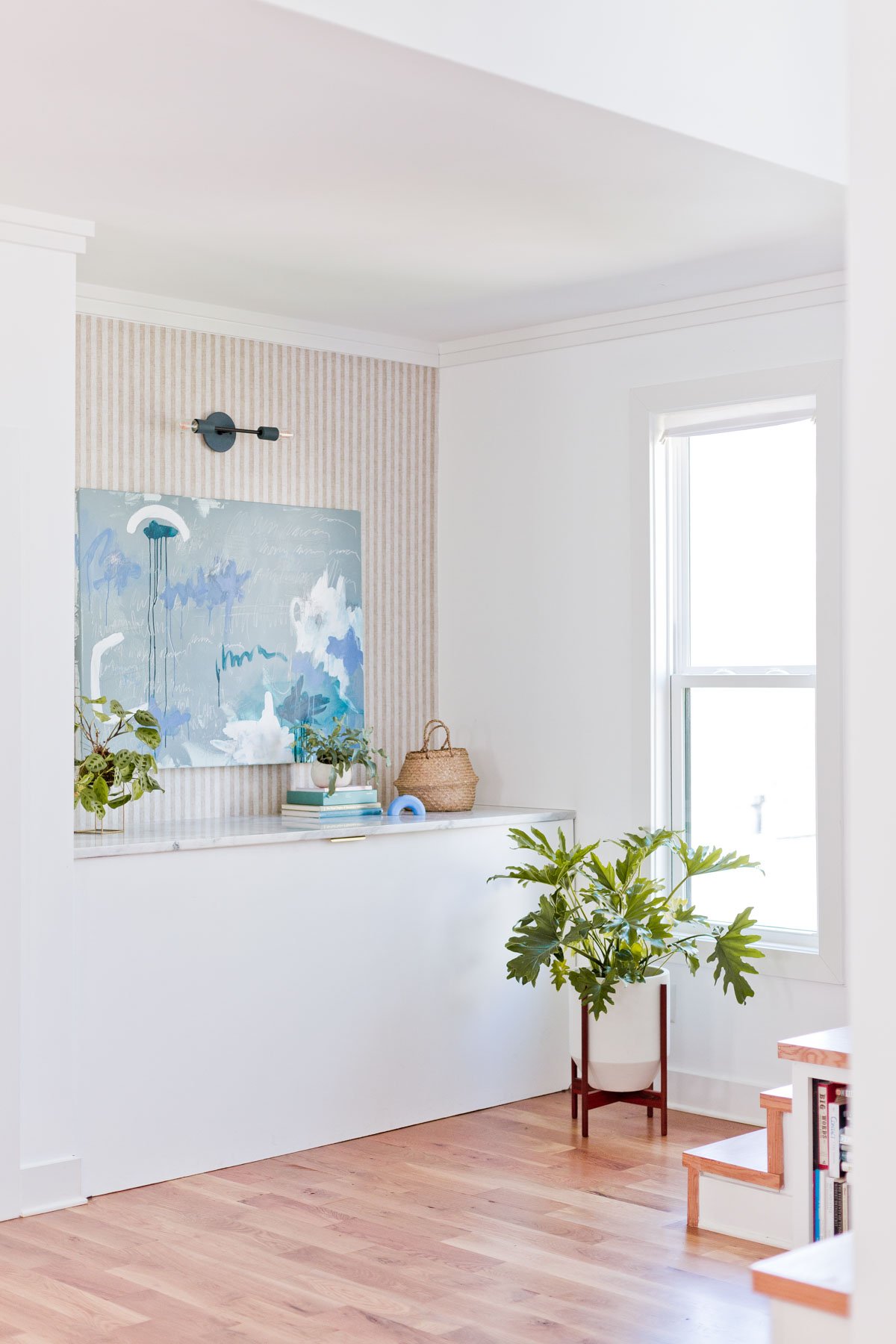 If you follow along on Instagram, you may have already seen my staircase a time or two. BUT one area I never really share is the little space opposite the staircase that has always been kind of awkward…until now!

I finally got some motivation to finish up that once forgotten space. It looks completely different now and I am LOVING it. But the best part is that everything I did to transform this space is completely renter friendly – from cleverly covering up a pretty big eyesore to switching out light fixtures and using removable wallpaper from Target! Click through for the full breakdown AND the before photos (which you are DEFINITELY going to want to see).

BEFORE WE MOVED IN… 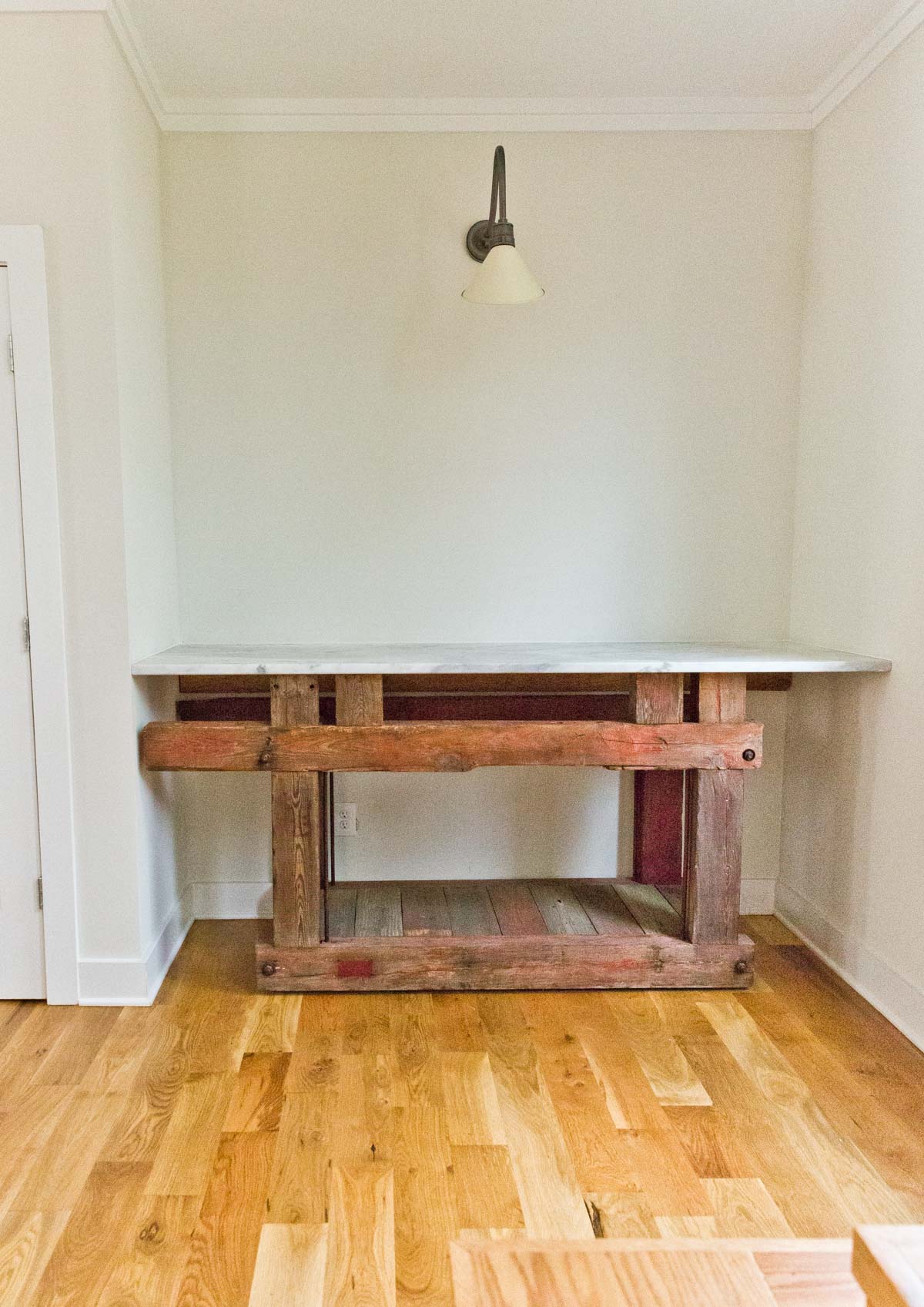 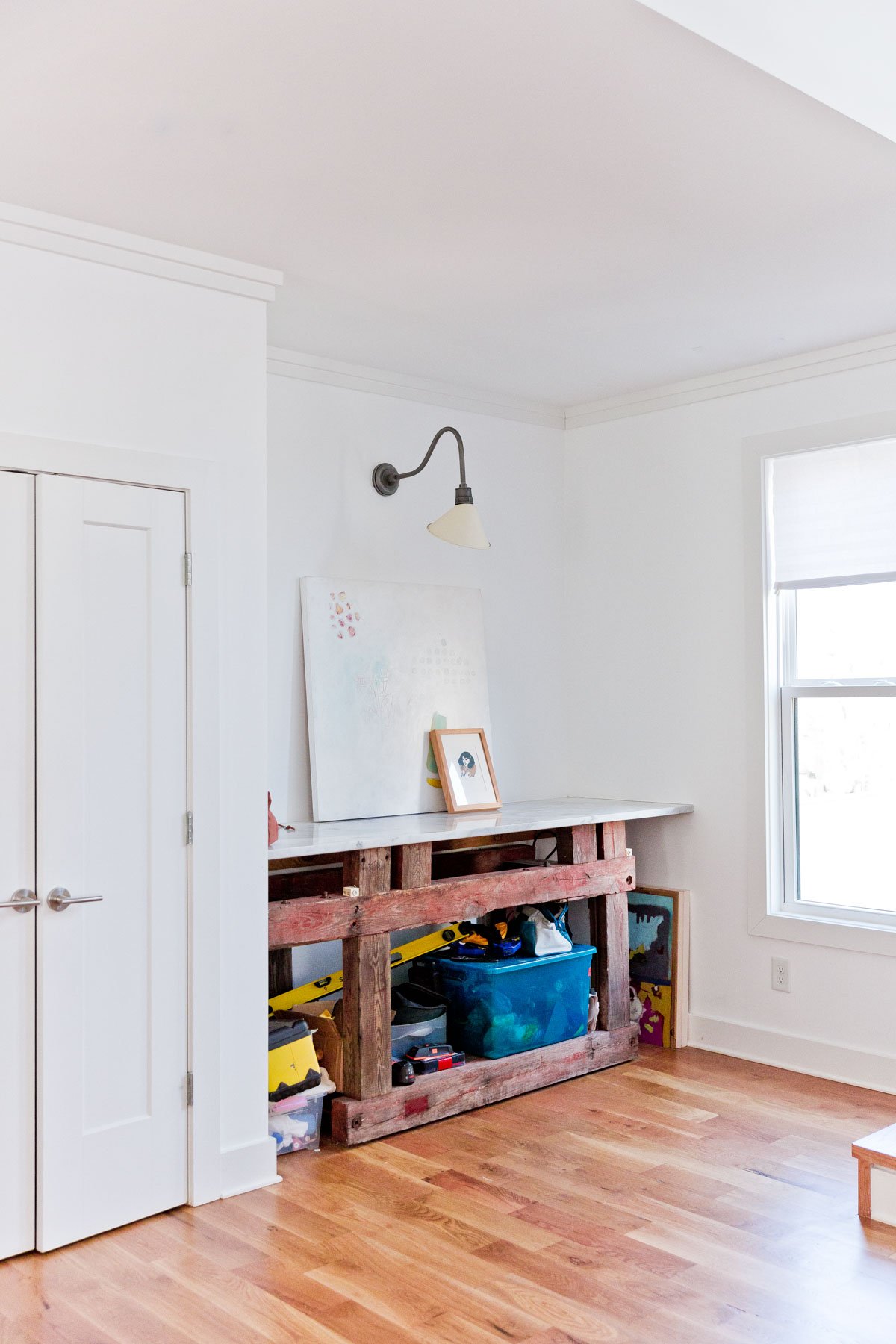 When we moved in, we thought this weird ‘storage solution’ would be removable. BUT it’s actually a built in?! A very confused-farmhouse-looking-to-be-fancy-but-also-casual kind of built in. It was like someone just closed their eyes and put together two materials that make absolutely no sense together – marble and super rustic railroad ties. And because we’re renting, we were just going to have to deal with it.

After all of three seconds in the house though, we realized there was no way either of us were willing to look at this eyesore for another week, let alone our entire lease. So, we got creative and DIYed a temporary front that we can easily remove when we move out. Bonus, it’s also easy to move on just a normal daily basis, so we store lots of stuff underneath (like tools and other bulky items that we don’t otherwise have a place for). I’ll share a tutorial for how we made the faux cabinet front in a future post if you’re interested.

Once we had that part done, the next thing we needed to check off the list was new lighting. The gooseneck sconce wasn’t really our vibe. So, we removed it and added a much more modern and minimal fixture in it’s place. We’re keeping the old light in the attic btw, so we can put it back up before we move out and take our good sconce with us. 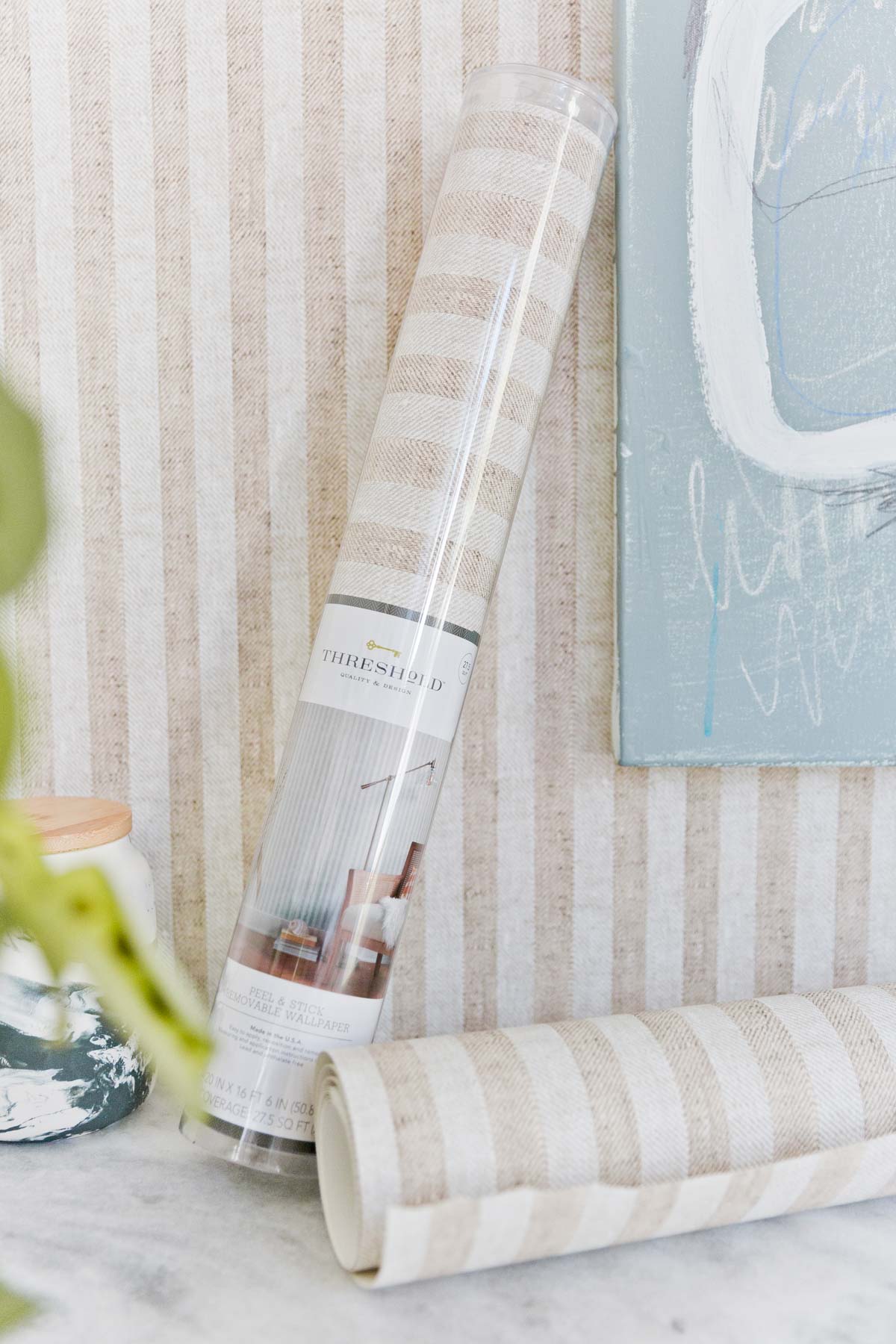 And then, to create a focal point and add depth, we we hung peel and stick twill stripe removable wallpaper from Threshold (available in Target stores and online at Target). Well, actually, I hung it all by myself one afternoon when Jeff was at work. But I’d like to think it was a group effort since he switched out the light fixtures without my help. I don’t do electrical.

I love the way the neutral stripes balance out the bold piece of art and more modern light fixture…If you look at some of the detail shots, you can see the visual texture in the wallpaper design. It looks almost like linen, which you know I love. And honestly, Hayes has at least three outfits that look just like this wallpaper pattern. So clearly I’m obsessed. Haha.

Each roll of wallpaper is under $30 and it took 3 rolls for me to cover this (roughly) 7 ft wide by 6 ft tall wall – making it a budget-friendly option at under $100. It’s really easy to install yourself, even without a second person. And each roll of wallpaper comes with a set of instructions that explains exactly how to hang it on the wall, so there’s no guesswork. I’m so glad we went with this option instead of leaving it white or painting it another solid color. It really warms up the space and lends to the homey but still kind of cool vibe of the stairway. 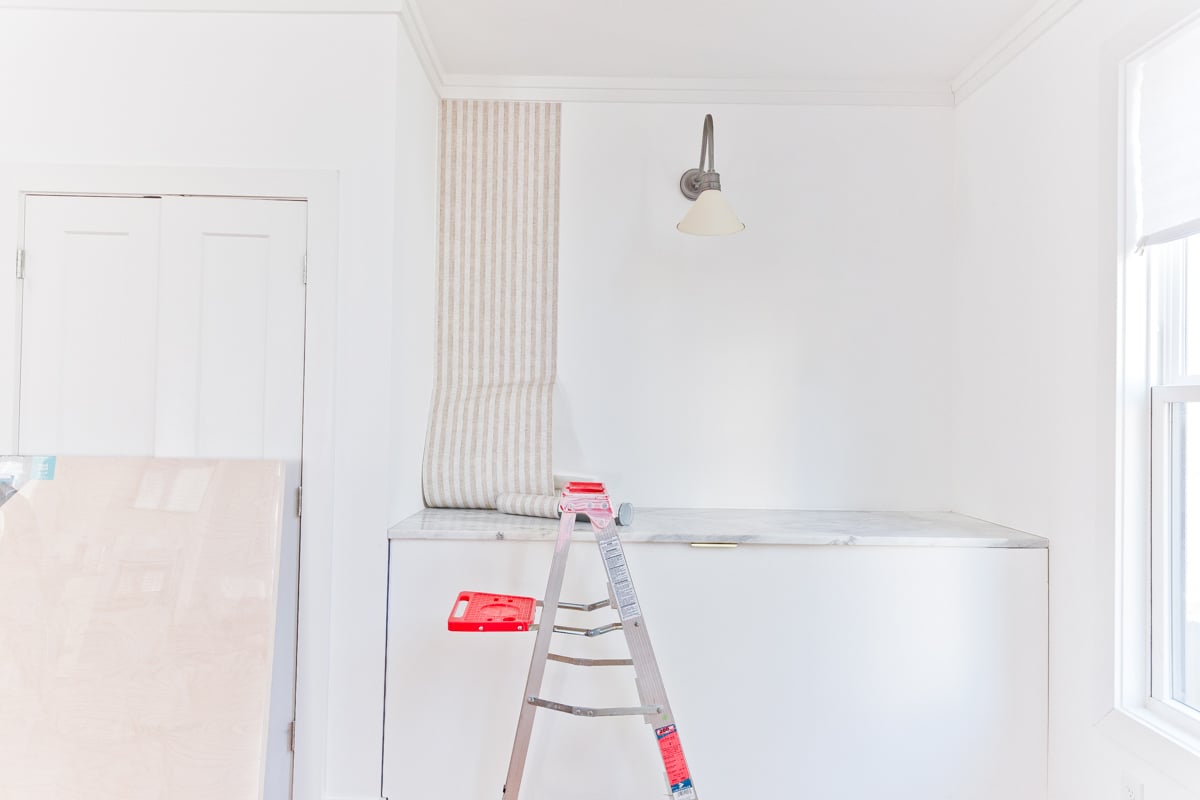 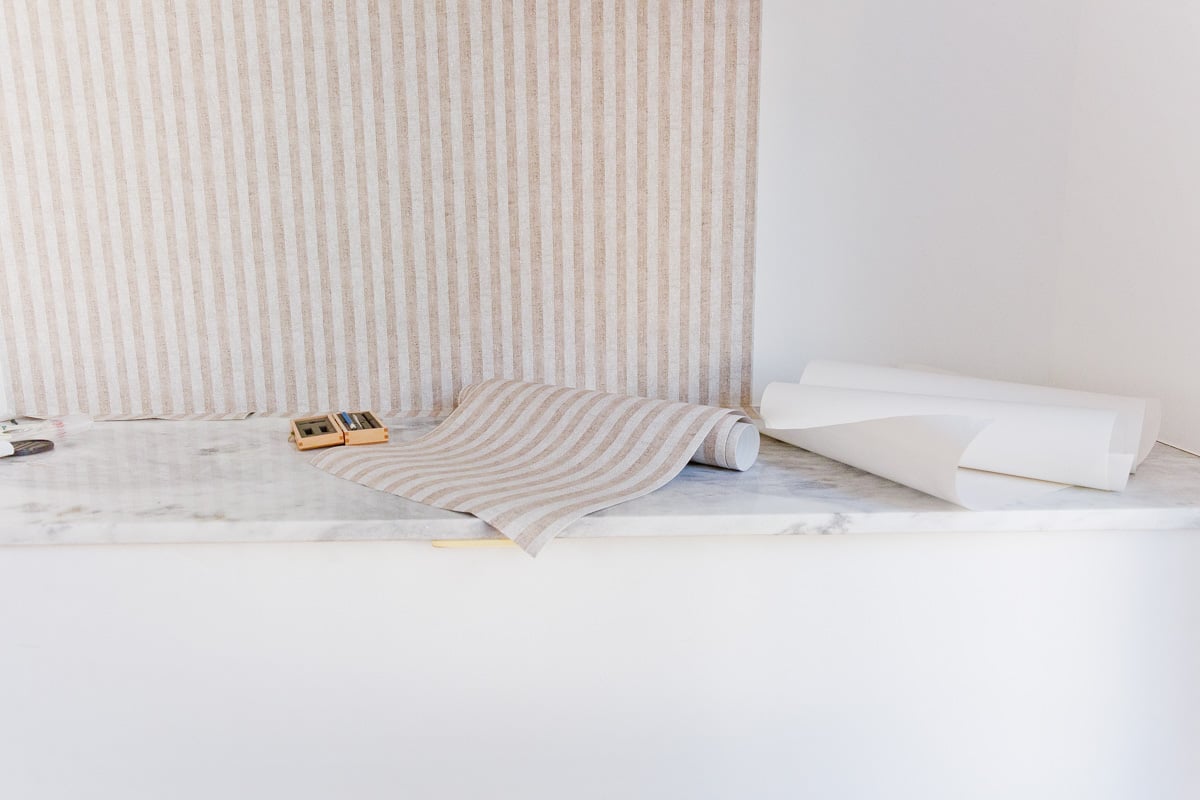 PLUS when we move out, since it’s removable, all we’ll have to do is peel the wallpaper from the wall, instead of having to repaint, etc. I don’t know exactly how this magic works, but the wallpaper stays up really well (no corners curling up or anything) AND also peels away from the wall super easily when you need it to, without damage. I tested this out to be sure I was recommending something that actually does what it says its going to do. And it really does!

After the wallpaper was up, I got out a sharp blade and trimmed up all the edges at the bottom and the top of the wall to make sure everything was even with a crisp edge. And then I hung a large painting and added in a few accessories I already had to finish things out. 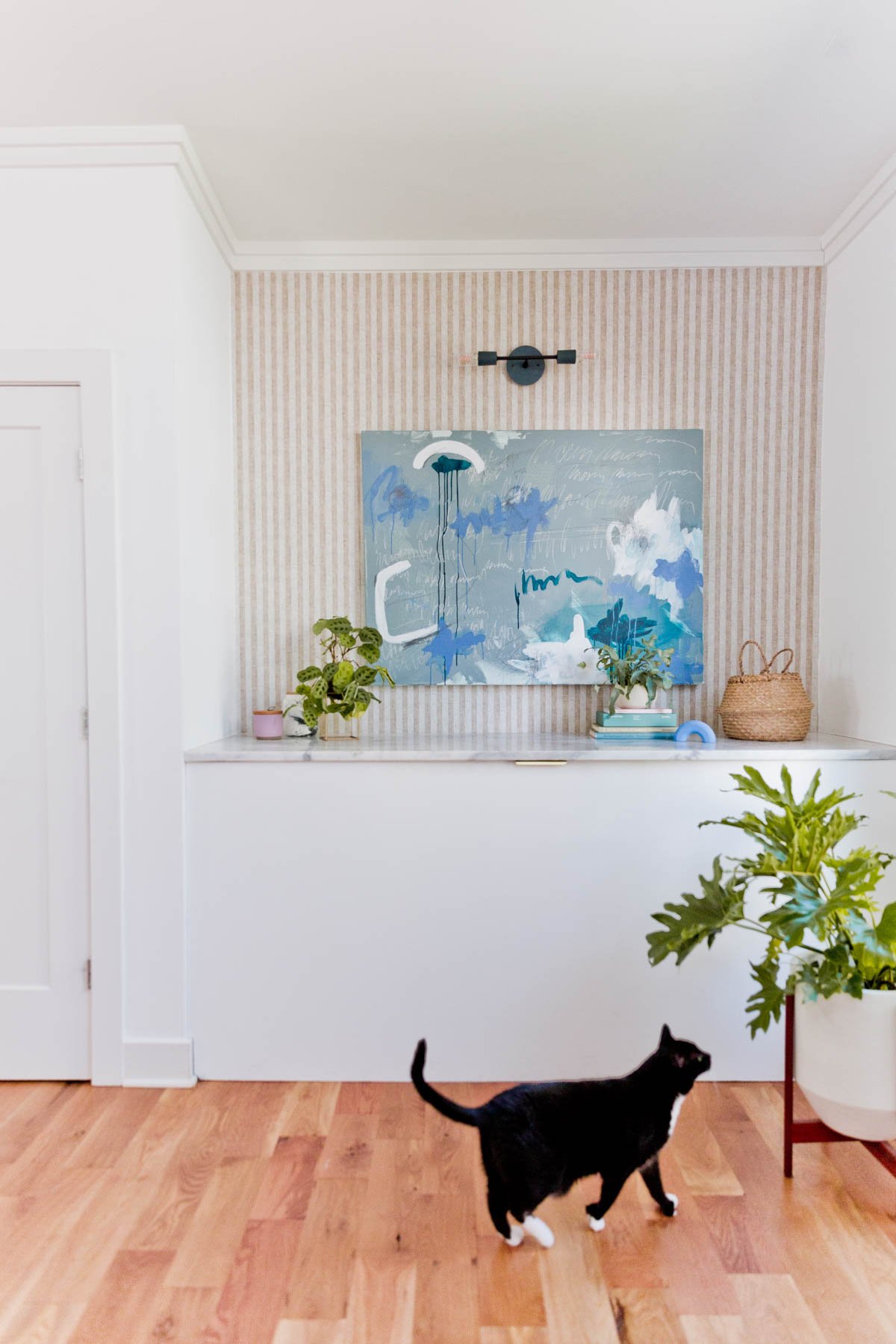 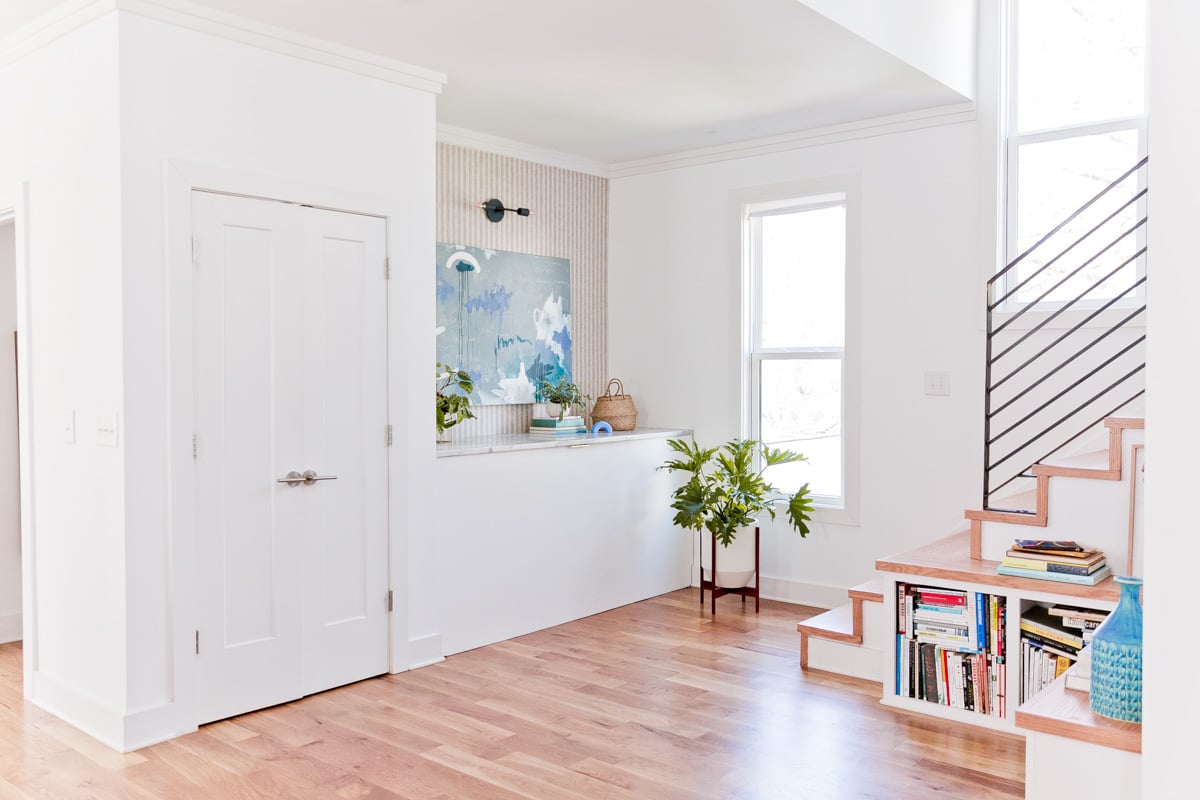 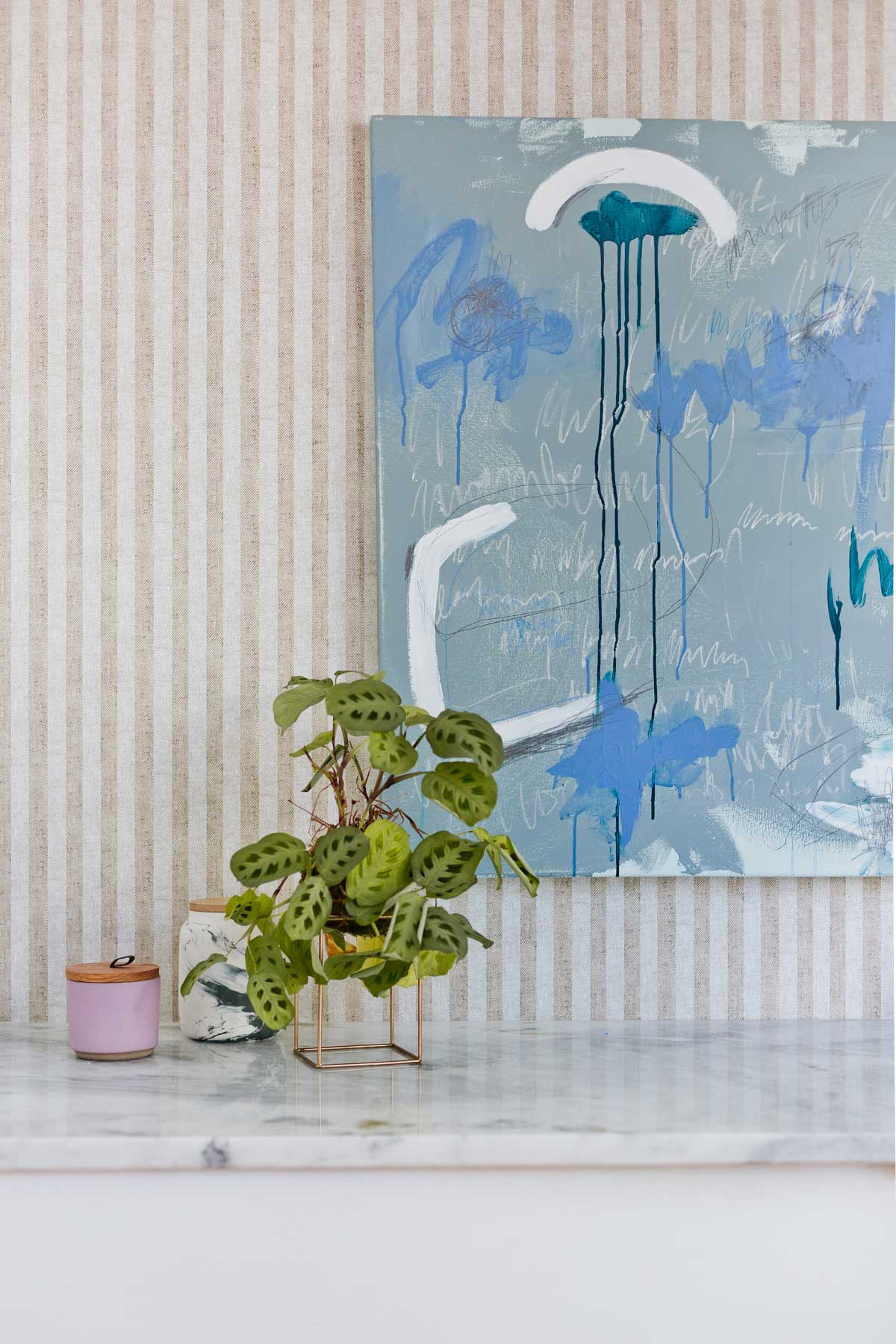 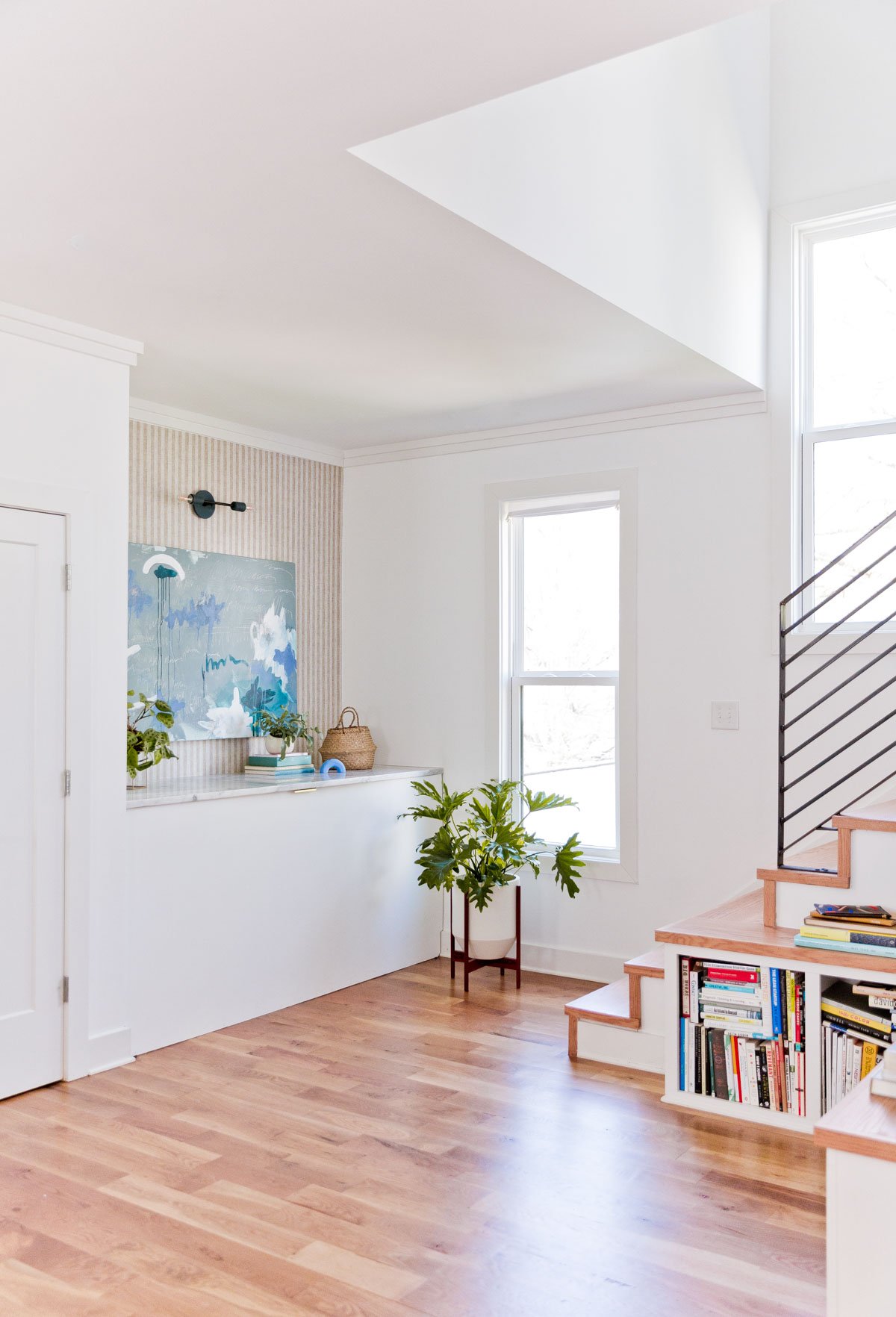 So that’s pretty much it. I’d love to know what you think of the before and after. Do you have a room in your house that could use an upgrade like this one?

This post is in partnership with Target. All opinions are my own. Thank you for supporting the brands that help keep Paper and Stitch running.

Aw, thank you so much Ann. Really appreciate that.
-Brittni

This is a stunning transformation! Can’t imagine why anyone would want to go back to the previous way it was. Awesome job!!!

It looks soooo much better, I love the statement wallpaper in that corner!
https://www.makeandmess.com/

Thank you Amy! Appreciate that.
-Brittni

The result is so lovely! Need a cute spot like this in my house too xx

With Love From Amy

Thank you Miss Agnes! It’s funny the stuff you can come up with to hide things and improve spaces when you’re in the confines of a ‘renters’ space. Although, these ideas would work for people who own houses too. 🙂
-Brittni

This is really clever, and looks like a high-end niche now thanks to the marble and the paper. What a great idea to build a removable panel as well, to hide all the ugly or cumbersome stuff away. Bravo!

I will, Sarah! Glad you want to see it. I’ll get it up next week hopefully. 🙂
-Brittni

So glad to hear you like this Linda! Almost all of my makeovers are renter friendly (since I’m a renter currently too). BUT this one is especially great because of the peel and stick removable wallpaper…such a big impact without the need for paint. Love stuff like that, that’s super easy!

Amazing job! So many of us are in the “renter” category and it’s hard to do a great look that is removable. Thank you!

The result is perfect!
xx from Bavaria/Germany, Rena
www.dressedwithsoul.com