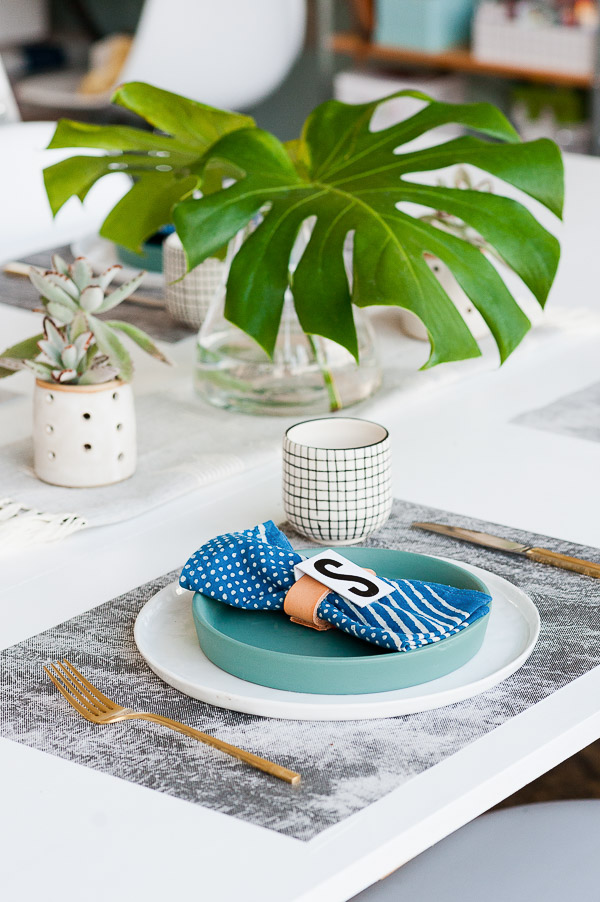 Father’s Day is almost here (about a week away) and I thought it would be fun to do a coffee and dessert brunch for all the Dads out there.

So I teamed up with EDWARDS® Desserts, to ‘bring the sweet’ with a few of their delicious pies and share some Father’s Day tablescape inspiration before June 18th comes and goes. Click through for the full shebang. 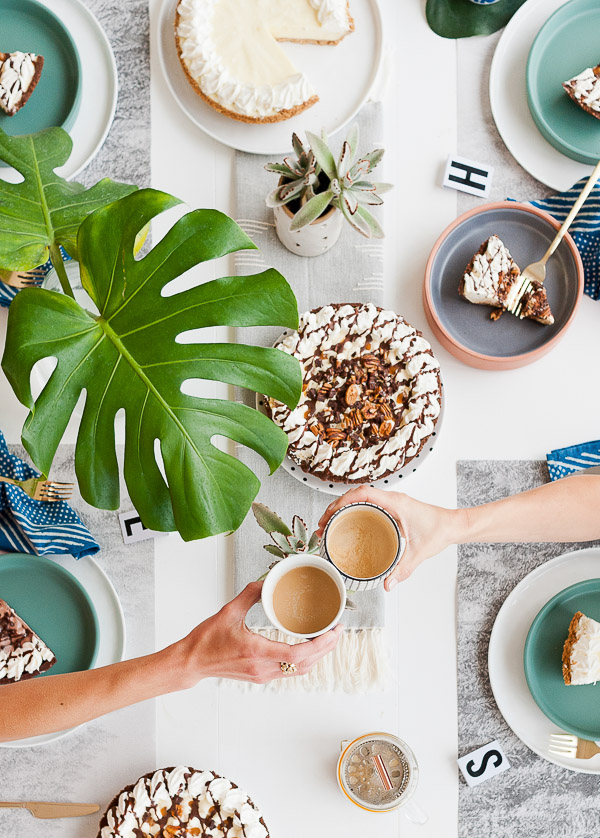 Generally speaking, dads are really laid back and casual when it comes to holidays that celebrate them. So I wanted the tablescape to mimic a more casual vibe, unfussy but still put-together. I kept things minimal in the decorating department, but managed to sprinkle in a couple of DIY ideas and a basic color scheme too, to tie everything together in the end.

The whole thing leans toward the more masculine side of things, which I really love. Darker textiles, simple plants, and leather accents all play a part and there’s not even a single flower in sight. Instead of florals, I sprung for monstera leaves and potted succulents that felt like a good mix between what a grown man might like and what I, as a DIY blogger, would like too. 🙂

I gathered some of my favorite plates, mismatched cups (still within the color scheme) and a few other items to bring the look to life. Then, all we needed were a handful of EDWARDS® Desserts and a huge pot of coffee to finish things off. 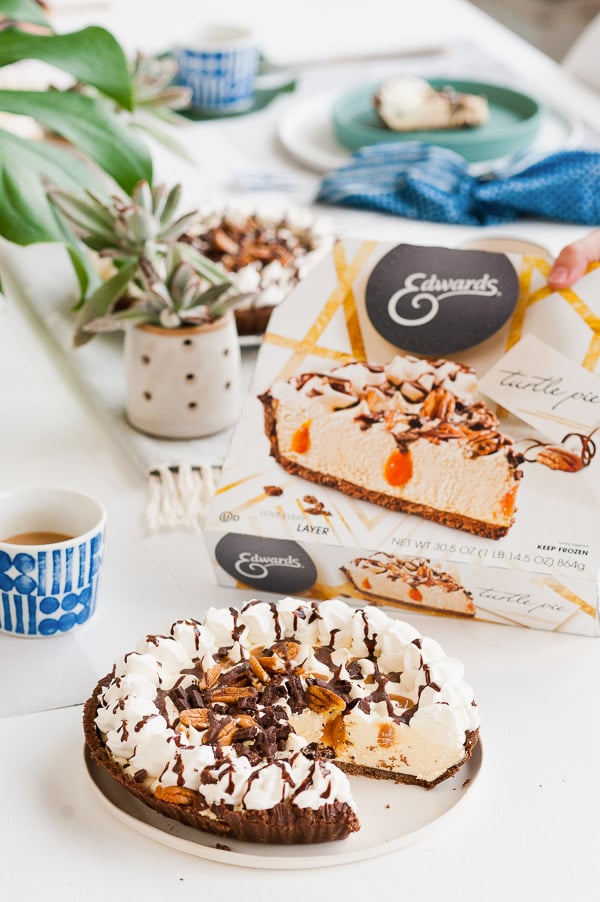 Oh My! So Many pies!

To step up my dessert game, I landed on not one, not two, but three EDWARDS® Desserts for this Father’s Day brunch. Going decanted on this one! I thought it would be fun for guests to be able to pick from a variety of flavors and maybe even be brave enough to go for multiple rounds of dessert. No judgment here.

I picked them all up at the grocery store down the street from me, so it was as easy to put these guys together as one-two-thaw. But they’re not just convenient, they’re really tasty too. My absolute faves were EDWARDS® Key Lime Pie (the crust is super thick and delicious – honestly, the crust is my favorite part of any dessert) and EDWARDS® Turtle Pie (which has ribbons of caramel, chunks of chocolate, pecans, and a crushed cookie crust). Lots of velvety layers in these desserts. There are also a variety of EDWARDS® singles slices, if this idea on a smaller scale would be more up your alley. 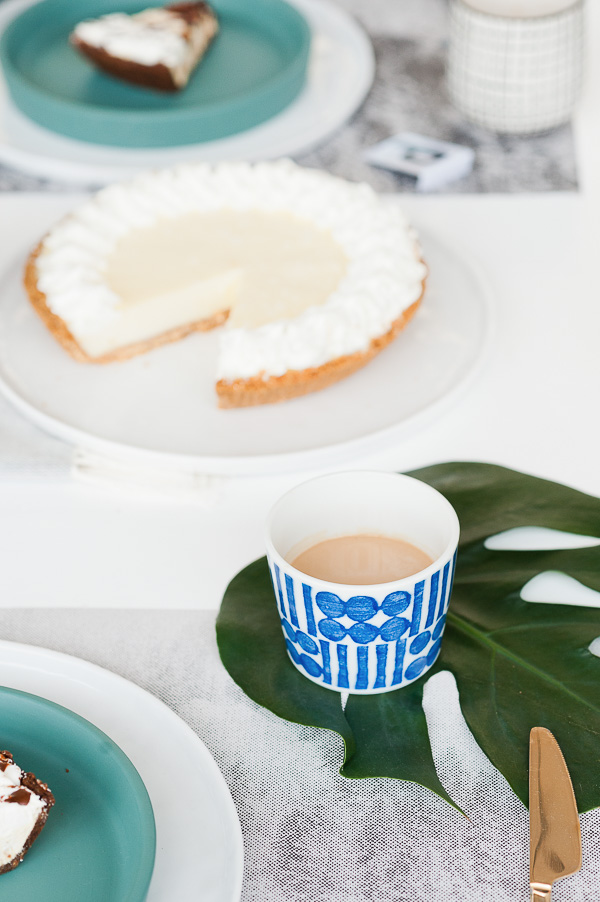 Although I kept things simple, there are still a handful of details to pluck out in case you want to recreate this Father’s Day tablescape at home…

Like I mentioned before, I went with monstera leaves and potted succulents as simple centerpieces, with a folded textile from Minna as a short table runner of sorts. And then the plates, coffee cups, and silverware were things I already had. White plates are CB2, forest green plates are from this shoot way back, and the silverware is West Elm.

On top of the plates, I used indigo napkins from Block Shop that I am absolutely in love with and DIY leather napkin rings. For napkin rings, just cut a 1/2 leather strip to a length of 7-8 inches. Then soak the strip in water for 10 seconds or so, wrap it into an oval ring, and let it dry. When it dries it will harden into shape and then you can add a bead of hot glue to the back to secure the two ends of leather if needed.

On top of the napkin ring, I added a graphic, mini metal letters that represented the first initial of each guest’s name – from Hip Hip! And then the placemats underneath everything are just a large sheet of Moglea wrapping paper that I cut in half. 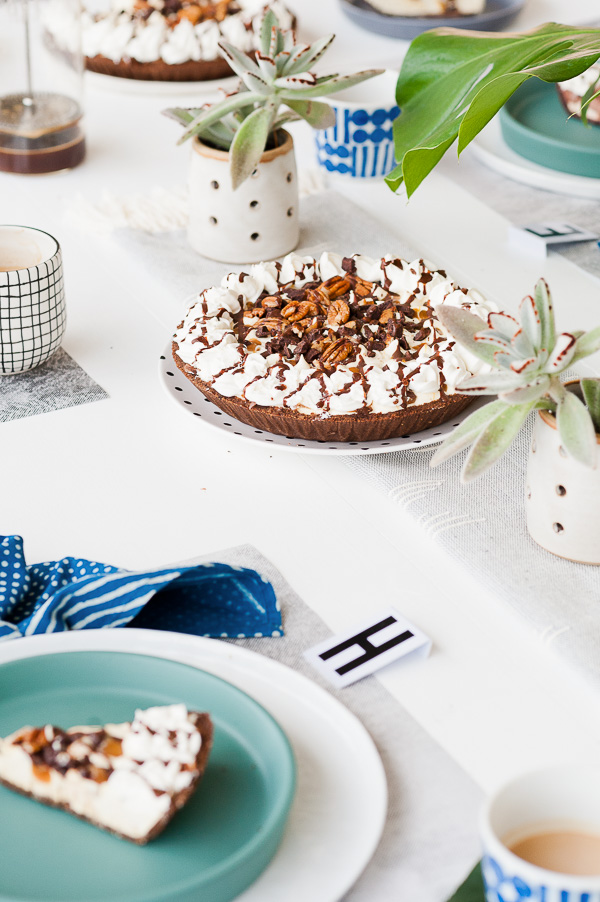 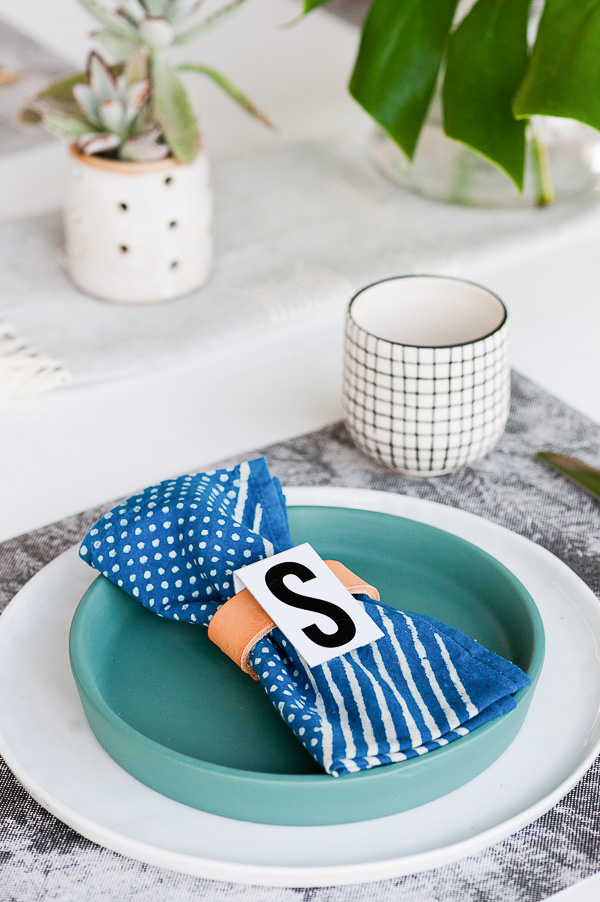 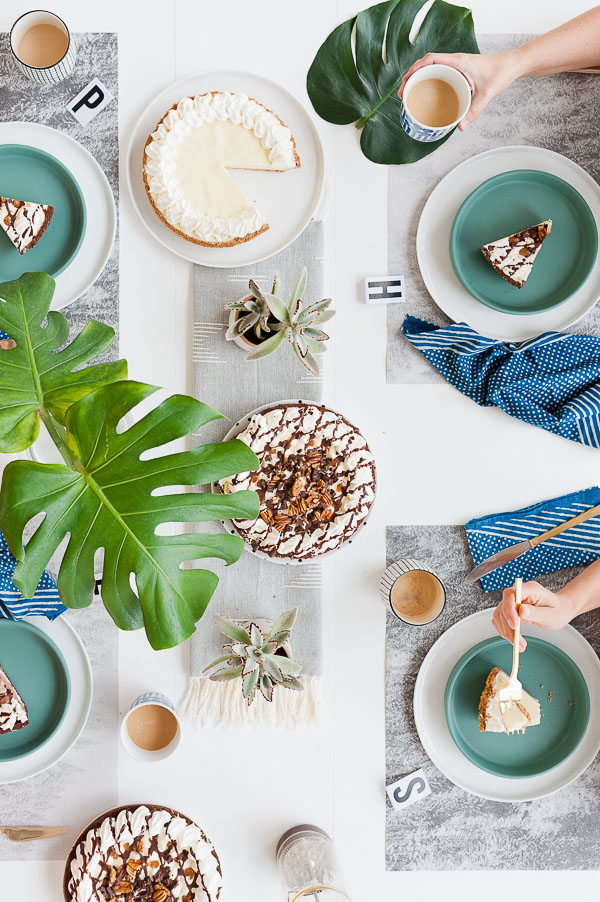 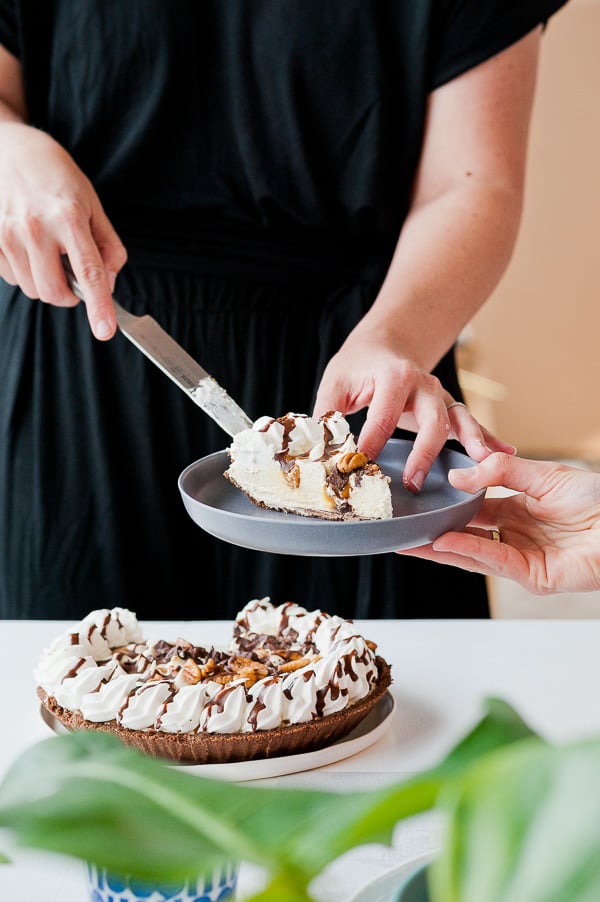 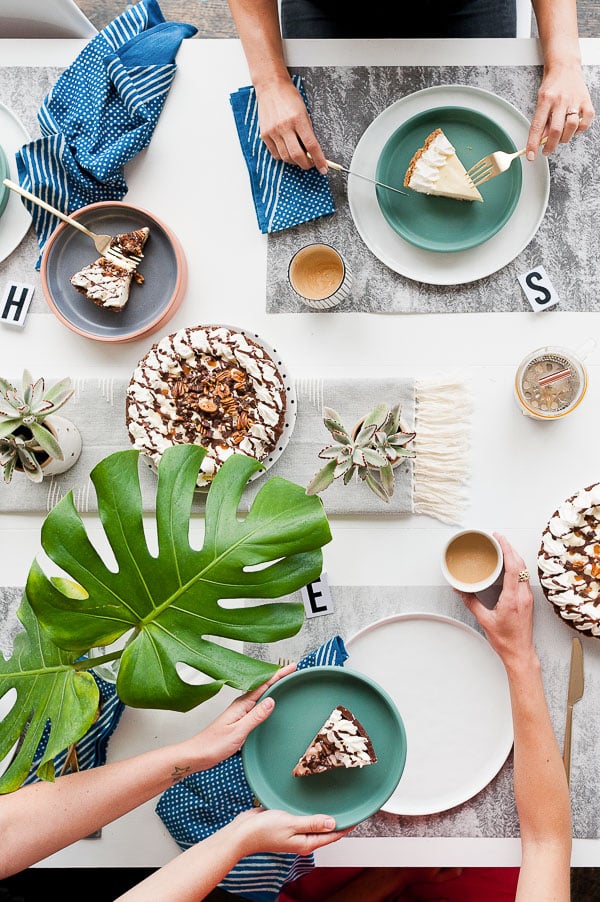 And that’s how you throw a minimal Father’s Day brunch! What do you think?

This post is in partnership with EDWARDS® Desserts. All opinions are my own. Thank you for supporting the brands that help keep Paper & Stitch running.

Thanks For Sharing about father day

[…] 1. Choose the fabric you’d like to use. I went with 3 fabrics that worked well together (all scraps from other projects – with the exception of the indigo fabric, which is actually a fabric napkin leftover from this Father’s Day brunch). […]

How to Sew a (Patchwork) DIY Foldover Clutch - Paper and Stitch

I love this spread! It’s so cute and so much simpler than others I’ve seen. The colors are perfect too. 🙂

This is such a good idea! Beautiful set, up! Not too over the top for dads!

I want that pie! This is my first time hearing of Edwards…are they online only?

I love the blocked/striped cups. Where did you get them from?

Thanks so much Michelle. That’s exactly what I was going for.

I love the decoration you used for this, it’s so simple but very stylish!
https://www.makeandmess.com/

Thanks Alexis – I can’t take credit for the photos though. That was all Amelia. 🙂

This is a wonderful idea! I love you’re photography!