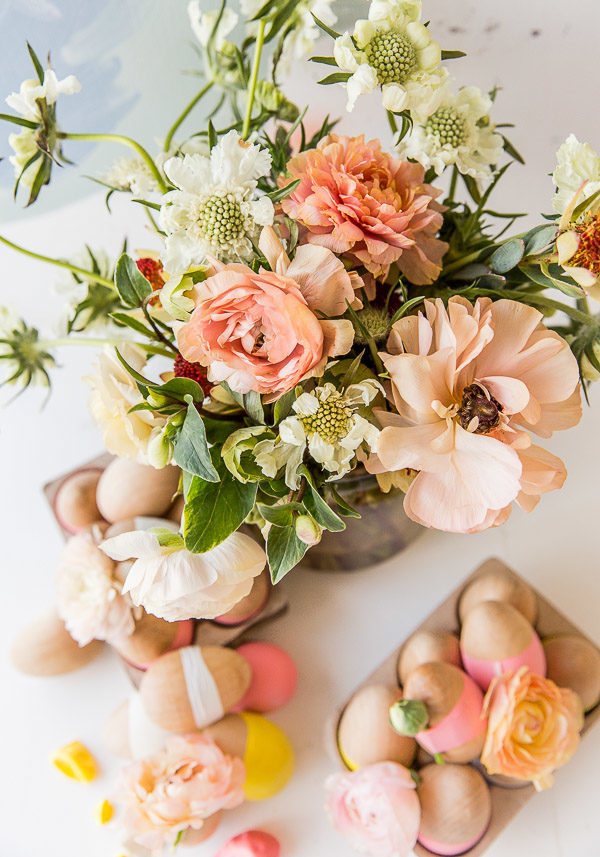 A while back, I was listening to a musician being interviewed about her music and she casually mentioned that when it comes to songwriting, the faster an idea comes out, the bigger the hit. Meaning if a song took 20 minutes to write, as opposed to ten hours, it was more likely going to be a ‘great’ song / higher on the charts than if it took many hours in the studio to force out.

That really stuck with me. Those effortless moments – the things that just flow right out of you without even trying are something to hold on to. Especially during the times when things are anything but effortless.

Fast forward to a few months later, when I went through a month-long rough patch that I’m still working through – starting with a whole lot of really difficult stuff going on with Luna (I’ll share the whole story soon), some work trips that couldn’t be postponed, and project after project piling up while taking care of Luna and pretending like everything was fine. And I started to feel a little more than just a bit burnt out.

And even more than just that burn out feeling, I was pretty short on ideas and not exactly feeling super creative with everything going on. So after having a freak out moment (or two), I somehow remembered that interview I had listened to months earlier and decided to shift my thinking. 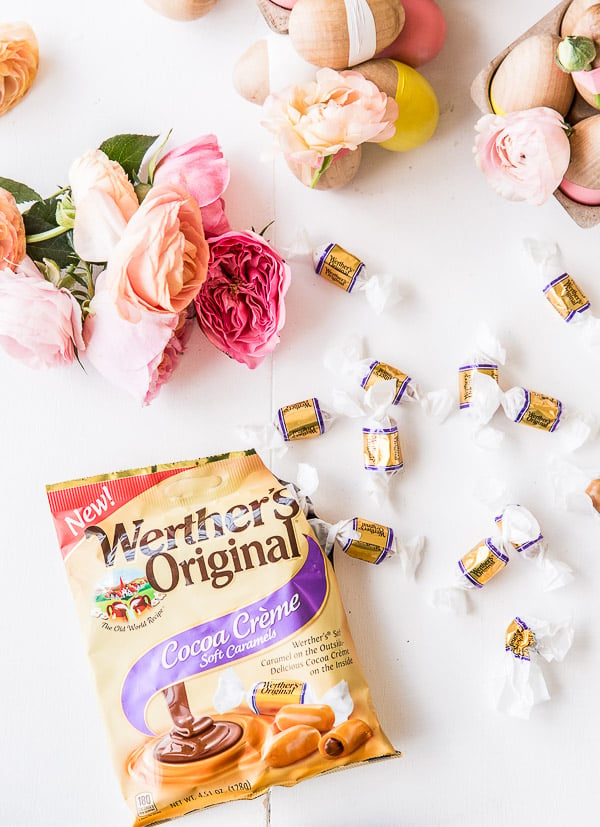 I needed to carve out some time to create an environment that was more conducive to having those ‘hits’ flow through me, instead of pounding myself over the head trying to figure out how in the world I was going to get it all done and get back to ‘normal’. During a time where I really didn’t have much time to carve out for anything else, no less, but I decided I needed to make it happen.

So, I got back into the studio, cleared off the biggest table, pulled together a handful of craft supplies, grabbed something sweet (Werther’s Original Cocoa Crème Soft Caramels), and gave myself a whole afternoon to just mess around and have some fun. Oh, and I threw some flowers into the mix too because flowers (much like caramels) make everything a little better.

I didn’t have any expectations going in – the goal was to just get out of my head for a bit and take a break from my to do list, even if it was just for the afternoon. To my surprise, it totally worked! I might not be creating a song that’s going up the billboard charts (in fact, it’s safe to say that I’ll never have to worry about that), or even a hit DIY for that matter. BUT I was able to get outside of my own head for long enough to get back into the swing of things. And that made the whole day totally worth it. 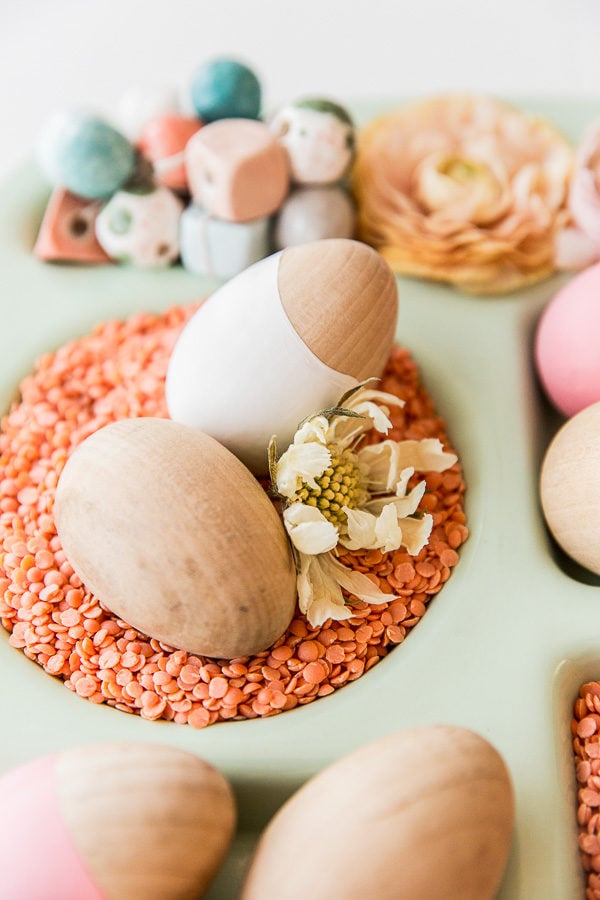 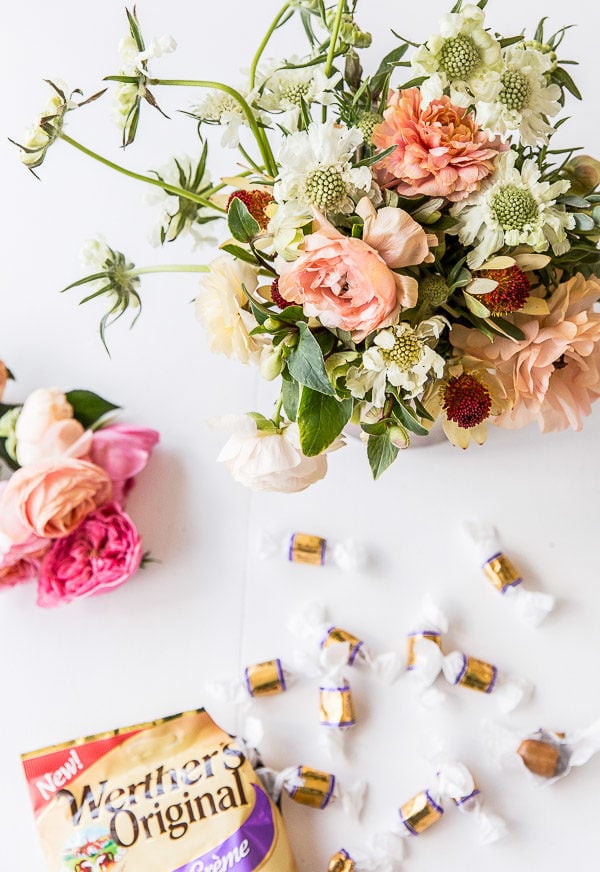 And now, after a handful more days of playing catch up, things are kind of back to normal work wise again. I finished up a couple of little blog projects, that surprisingly resulted from my day of play. Balloon dipped Easter eggs and bath salt Easter egg bombs to be exact. Messed around with all those flowers to create an arrangement just for fun, and managed to eat my weight in caramels.

Kind of kidding on that last one… but  I actually did go through a whole bag that day, which I’m not sure I should even be saying out loud. But in my defense, have you tried the new Werther’s Original Cocoa Crème Soft Caramels yet? They’re the newest Werther’s Original flavor – combining two of the most beloved candy flavors, caramel and chocolate and they’re really, really good. Hence eating a whole bag in one day. Totally “werth it”! 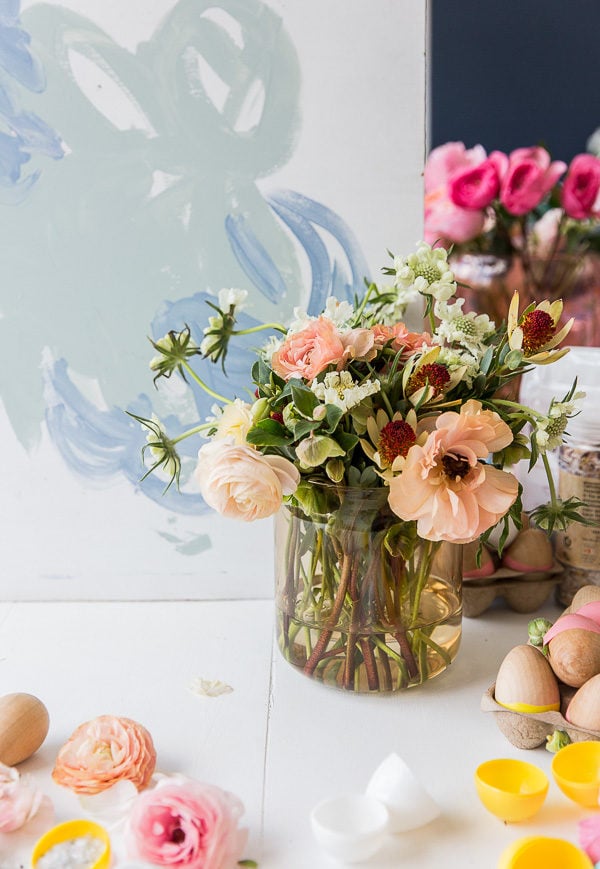 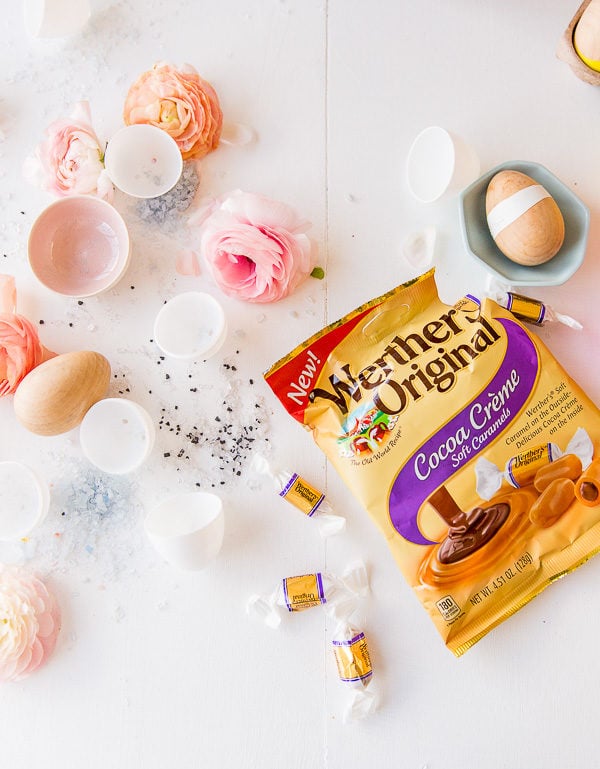 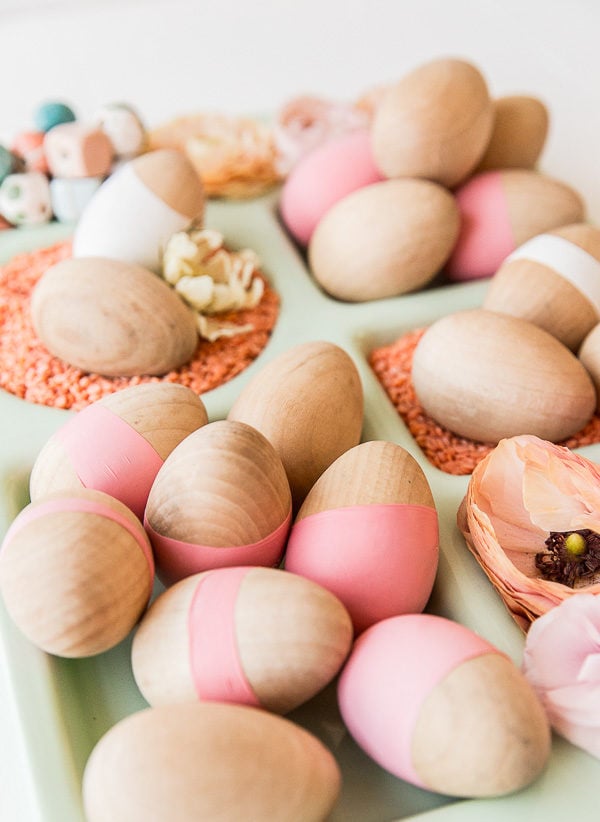 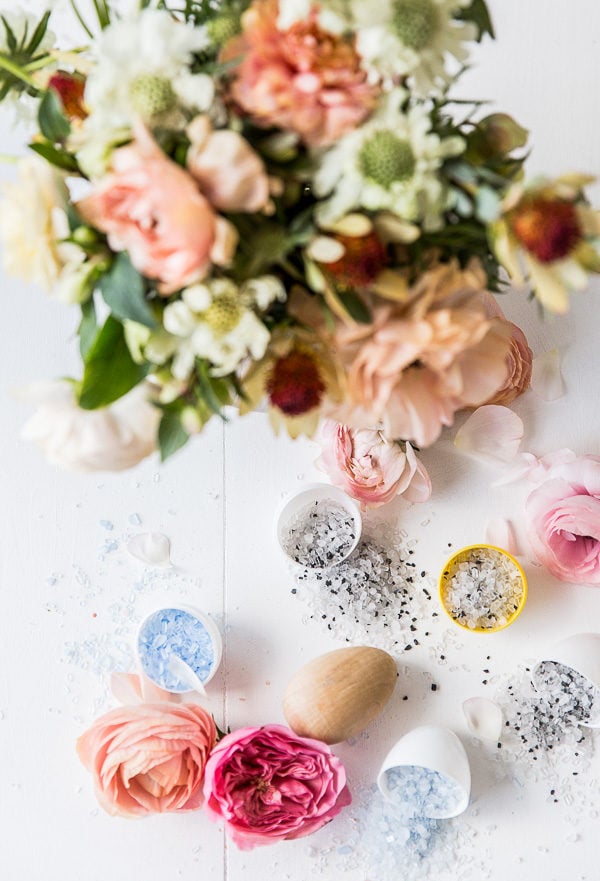 Anyway, long story long, in the end I was so glad I took that time out, during a week when I really didn’t have the time to spare, to regroup and recharge.

And I’m wondering if you’ve ever tried something like this as well, during a hard week (or month for that matter)? If not, I highly recommend giving it a whirl and letting me know how it goes.

This post is in partnership with Werther’s Original. For more information, visit www.Werthers-Original.us or on Facebook at Werther’s Original US. Thanks for supporting the brands that help keep Paper & Stitch running.

< previous post6 DIYs to Try This Weekend
next post >Pillow Talk: How to Make Standard Pillowcases (in 15 Minutes) with Any Fabric

Okay first, those flowers are so amazing, I am obsessed with how open and papery they are! What are they?

I just started reading The Subtle Art of Not Giving a F*ck and I’m positive there is something to caring, but not caring at the same time. It’s the moments when you let go that good things, surprising things, can happen.

love the way this article kicked off. I do believe best things in life come out from instinct, not thought decisions. They could be songs, novels, eggs or whatever.
http://www.vivaguides.com/single-post/Arts-and-crafts

So sorry to hear that Luna isn’t doing well, Brittni. I know how much you love her. I’ll be praying for y’all. I’ve been in that space that you mentioned for a while. Feeling the pressure to create content but not having the ideas (or the energy for that matter, to be honest). I haven’t allowed myself the time to just play to clear my head. It sounds so simple, yet effective! Oh, and I love that flower arrangement. You put flowers together so well.

In life you just have to carve out some time to just clear your mind, its why I started doing the miracle morning. Started with only giving myself 6 minutes now I have carved out 20 minutes just to clear my mind every day. BTW these are the most beautiful pictures ever. Simply gorgeous.

I’m glad you were able to take time to recharge. It’s definitely a hard thing to do when you have so much on your plate and so little time. However, I’ve found that whenever I have those types of weeks, making time to decompress gives me the energy to be more productive when I get back to work. Maybe I should also try the bag of caramels trick next time I’m feeling like I need to take a break. 😉

So happy to hear that your rabbit pulled though, Kathleen. And I really appreciate you thinking of Luna. It is definitely an exhausting experience when animals aren’t well, but we do it because we love them so much. And it’s all very, very worth it to have them. Thanks for sharing your story.

I totally understand how you feel, especially about sick pets completely changing your daily routine. My pet rabbit was suddenly ill last year and I don’t think I got any work done for at least two weeks. I’m so grateful that he pulled through, but it was an exhausting experience. Thinking of you and Luna!

I love that Laura! Especially the cleaning Mondays thing – so much better to work in a clutter-free, clean space. Thanks for sharing.

I’ve been making myself do something completely non-work related once a week the past couple of months. It’s been a tremendous help. The other day I just took the afternoon to sit on my front porch and read. Another thing that’s been helping me tremendously is clean studio mondays! I take an hour or two every monday to put things away, sweep the floor and make sure materials are stocked. It starts the week on such a positive note.