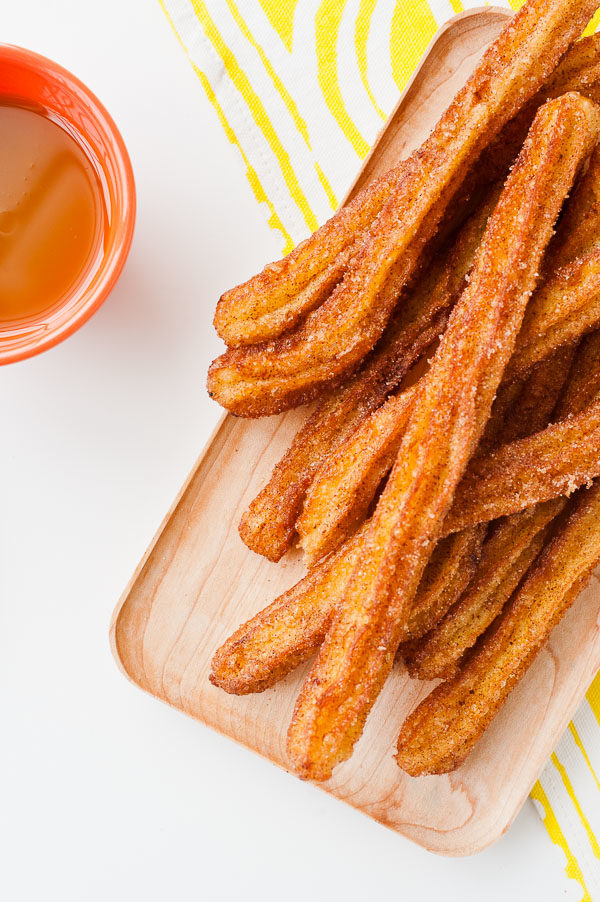 After the success of the buñuelos stacks, I figured more fried cinnamon sugar goodness was in order. And churros just seemed like the right move. Yum!

So, if you’re looking for a sugar party on a stick, check out today’s recipe for cinnamon sugar churros… 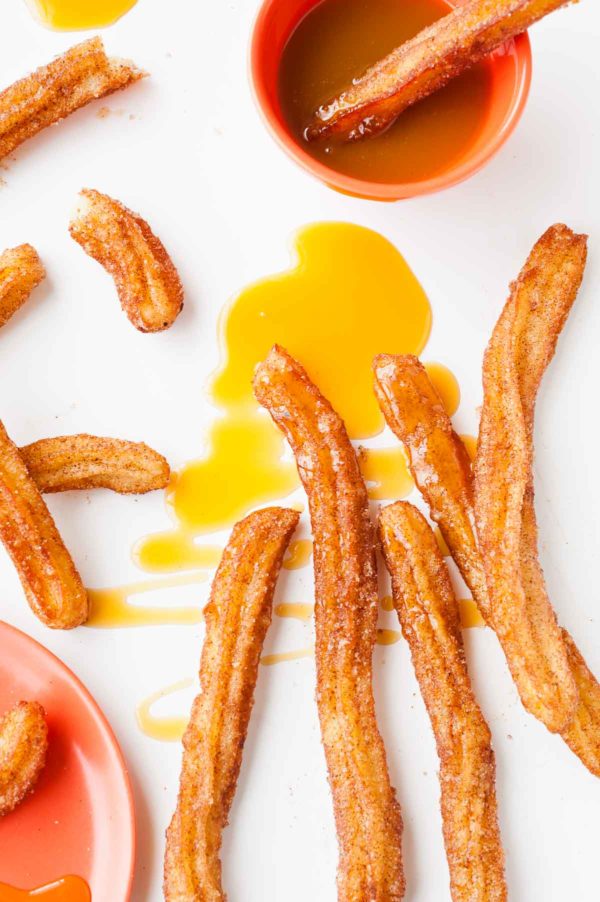 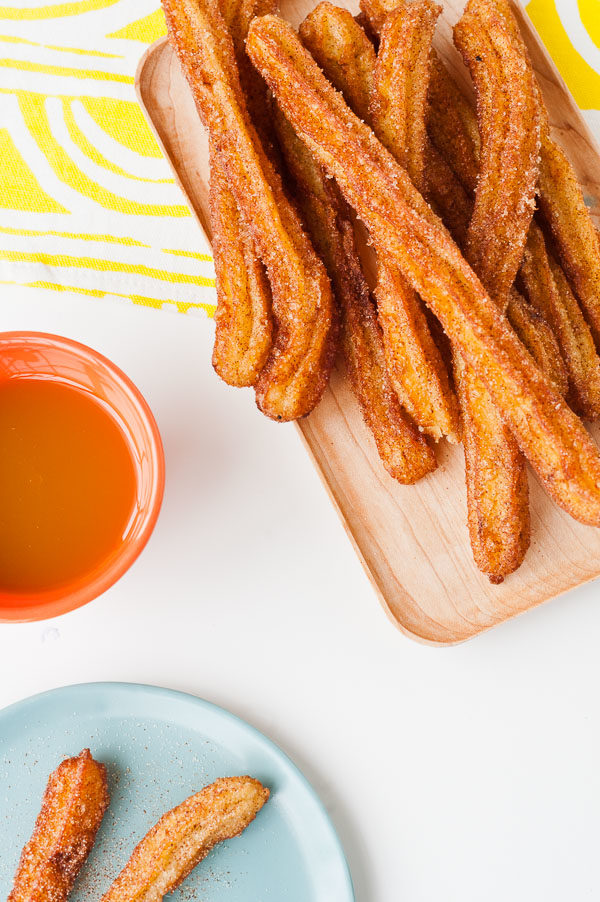 Sift the baking soda and flour into a small bowl and set aside.

Then, in a medium sauce pan, add water, butter, salt, sugar, and brown sugar to the pan. Let the mixture come to a simmer then remove from heat.

Start to heat the oil in a pot or a deep skillet to 375 degrees. You could also use a deep fryer, if preferred. While the oil is heating prepare the piping bag with the dough fixed with a star tip.

Once the oil is heated, pipe out about 5 inches of dough into the oil and fry for roughly 4-5 minutes, while rotating until it is golden brown.

Remove from the oil and let them drain on paper towels to catch some of the extra oil then roll in cinnamon sugar. We used 1 teaspoon of cinnamon and 3/4 cup of sugar, if you need a jumping off point. Best served warm.

I love dipping sauces! And if you do too, I highly recommend trying this homemade salted dulce de leche with the finished churros. It’s SO good. 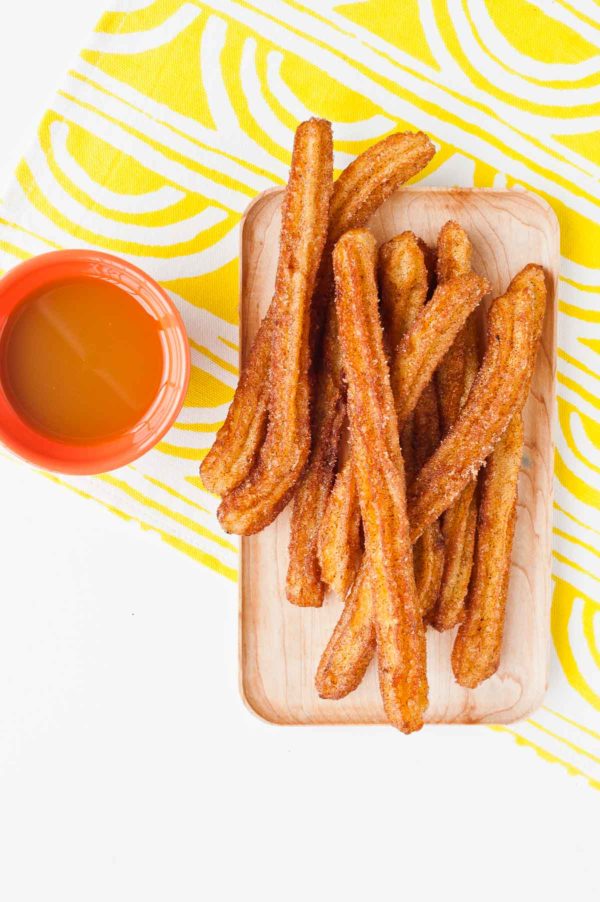 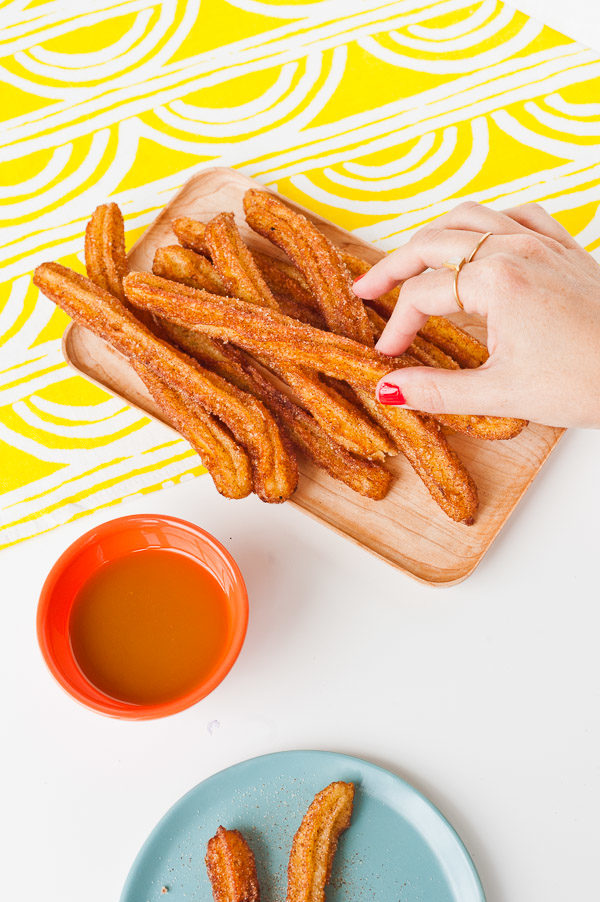 Are you a churros fan? And random side note…does anyone know if national churros day is actually a thing? I know it doesn’t matter, but I’m really curious…read a couple of articles saying it was on June 5th, one that says it was sometime in May, and others that seem to indicate it doesn’t exist at all. Any ideas?!

P.S. Today is the day we are flying to Europe! Heading to the airport in just a few hours. Be sure to follow my adventures on Snapchat and Instagram  if you’re interested in doing a little sight-seeing, without having to leave the house.

YUM! Making these for the family Christmas morning before they get up and surprise them ..all 6 of us love them ! Thanks for sharing..made my day. As always love the posts..one of the best..favorite bloggers!

I tried to make churros once before but they came out horribly wrong. I have no idea why, but it was when I’d first started cooking lol. MY little sister gets churros anywhere and everywhere she goes so I’d LOVE to make these for her graduation next week! Thanks for sharing 🙂

I love churros! There has just been a new Churro chain that has been going really well where I live. Now, I can make it at home! Thanks!

These look amazing! Last time I made them I made a chocolate sauce to go with, but now I can’t wait to try them with the dulce de leche sauce!

Haha. Yeah you do Michelle. 🙂

I need them. Now!
https://www.makeandmess.com/