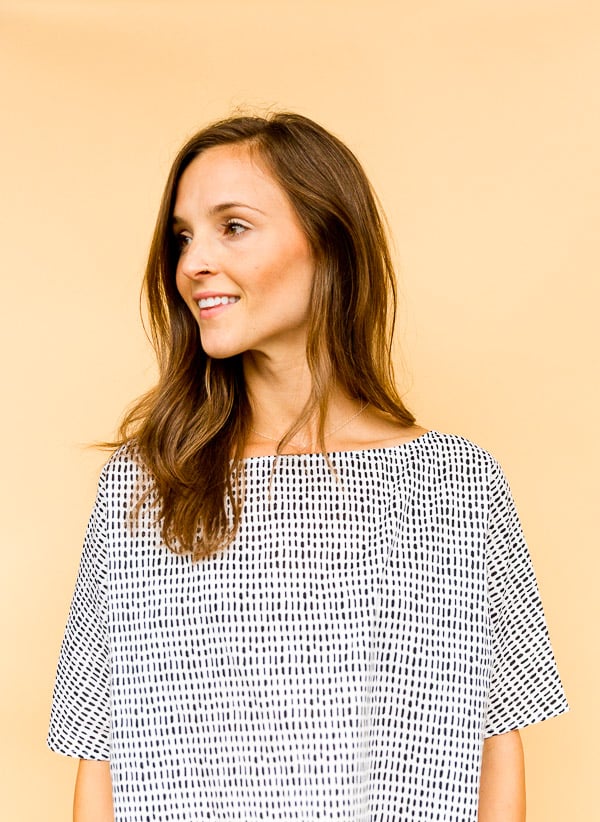 Soooo…I’ve had this dress for over a year now and have never worn it. All because while I love the pattern and the buttons in the back, it totally looks like a hospital gown on me. Which isn’t quite the look I was going for – and I didn’t come to that realization until it was too late to return it, unfortunately. It actually looks worse in person, the photos make it look cuter than it is.

Anyway, in an attempt to salvage the situation (there are some redeeming qualities), I had it turned into a shirt! And am sharing the tutorial for how it was done today, just in case you have an old dress in the closet that could use a similar treatment. 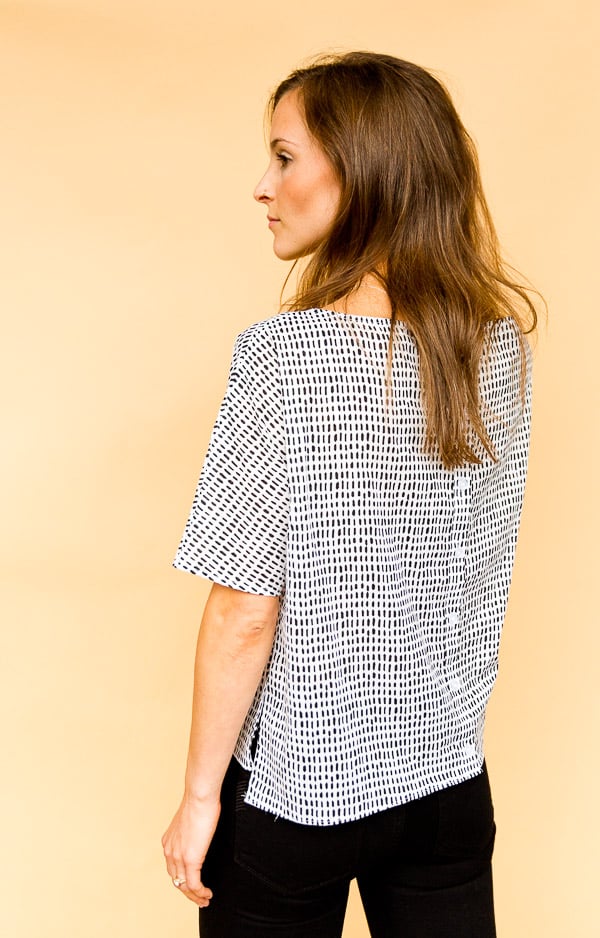 I took a quick pic of the before and after on me, but Sara was kind enough to model the more glam after version.

I styled her exactly as I would wear it…with black jeans (of course)…I’m not even sure I own jeans in a color that isn’t black at this point. And while we are different body types, it does look similar on me… It’s a boxy style, that kind of works on anyone and is really comfy / carefree.

1. The first thing I would recommend doing is trying the dress on and deciding on a length that you like for the shirt. I’m 5’3 and decided I wanted my shirt to hit around 18 inches from the neckline, but depending on whether you’re taller or shorter, you may want to alter that measurement. And you’ll also lose 1/2 inch when sewing, so keep that in mind.

2. Once I had the overall design and measurements down, we made a few marks on the dress and everything was cut down to size. For the side vents…there were pockets in the original dress, so those were cut out and that formed a slit on the sides of the shirt. But you can also just cut the slits yourself from the side seam (or use a seam ripper) and then tidy up the edges with some sewing which I’ll explain in step 3.

3. The next step is sewing. Super simple – just a few straight lines to tidy up all of the raw edges and you’re done. You may want to pin the fabric down to give yourself a guide. We folded the shirt in at the bottom about a half inch and hemmed a straight stitch across the front of the shirt, then the back of the shirt, and the side vents. Then cut any long pieces of thread, etc and it’s ready to wear. 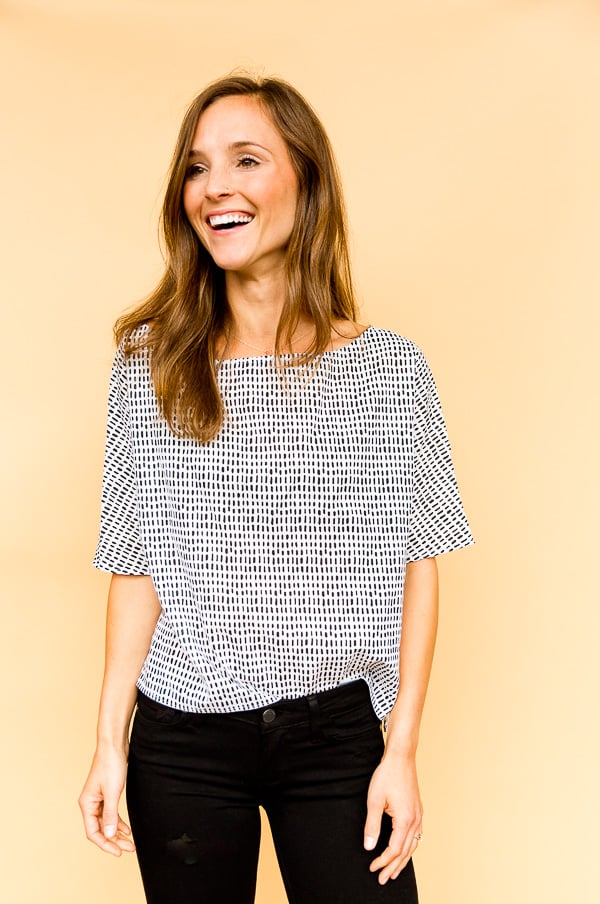 There’s a little part of me that’s always wanted to design clothes (it was one of my dreams in high school – like everyone else, I imagine). So, this was a fun little project to put together.

It’s not exactly a clothing line (haha), but it’s nice to get some use out of an old piece of clothing again. 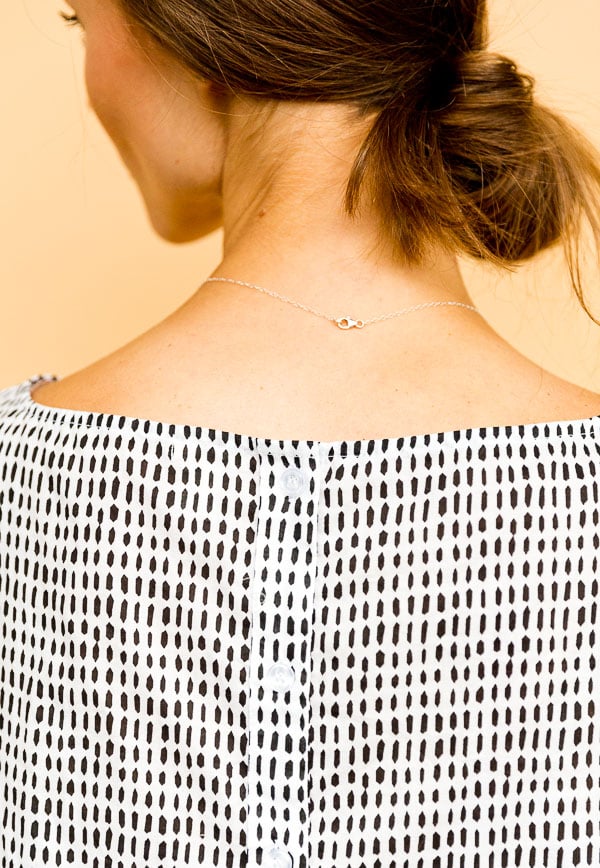 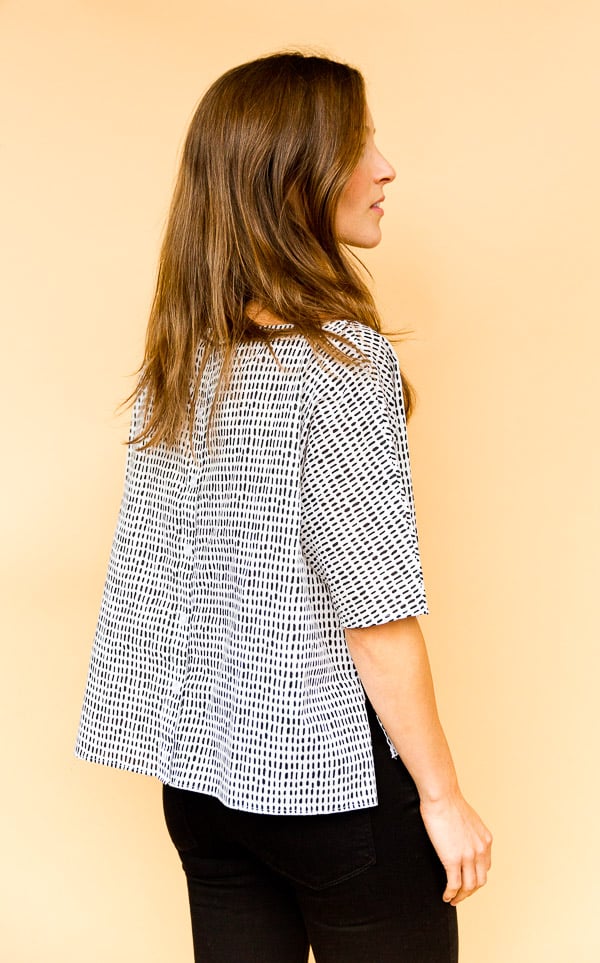 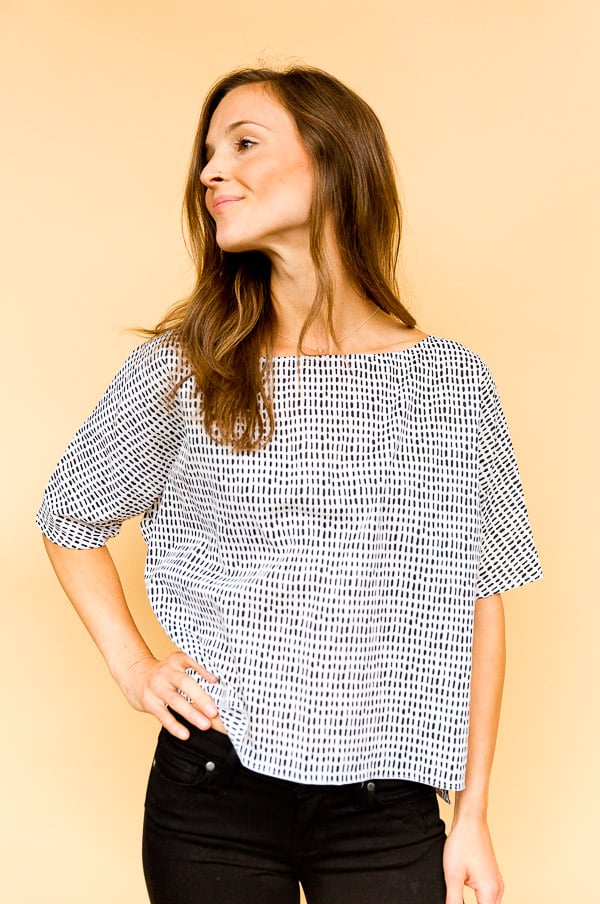 Do you have an old dress like mine that could use an upgrade? And more importantly…are there any other DIY sewing projects you’d like to see in the future? I’m all ears.

Hi MM. I guess that would depend on a few things, but here are some general ideas…if the length of top you’re hoping to create is longer than where the start of the zipper is, it would be a pretty straight forward approach. Otherwise, if there is enough room to remove the zipper all together, you could remove it and sew up the back OR add buttons instead. OR remove the old zipper and add a new one that is the proper length for the new top you’re creating. Hope that’s helpful. Sorry I ain’t be more specific than that, since I don’t know any details of the dress you’re working with.
-Brittni

What suggestions would you have for a dress that has a zipper down the back and converting that into a shirt?

[…] Make her a trendy new top out of an old dress – she’ll be so impressed by your ability to both sew and save! Mom-win, for […]

Hi I would like for my shirt to be transformed into a dress.

[…] pillowcases (for your bed) 3. DIY wall art weaving hack 4. do-it-yourself headboard idea 5. how to turn an old dress into a shirt 6. DIY gift ideas (for the holidays and beyond) 7. how to make grocery totes with old t-shirts 8. […]

A Walk Down Memory Lane: The Most Loved Projects of 2017 (According To You) - Paper and Stitch

63 Awesome DIY Gifts for Everyone on Your List + What's your Favorite Gift You've Ever Received?! - Paper and Stitch

it is so beautiful love your style !
I know that koocam.com are looking for people who know how to DIY etc…
recommend you to check it out 🙂

6 DIYs to Try This Weekend - Paper and Stitch

Thanks Michelle. I was a little nervous to chop up the dress. But I figured since I wasn’t wearing it anyway, I didn’t have anything to lose. Glad it worked out. 🙂

As as shirt it looks super cool, good decision!
https://www.makeandmess.com/

Thanks What Mum Loves.

awesome! it was a beautiful dress but I think I like the shirt better <3

Glad to hear that Helen. Love repurposing old clothing pieces for something new.

This is such a great idea! I love recycling and repurposing old clothes. I definitely have a few dresses that I might turn into shirts now that you’ve inspired me to do so. 😀