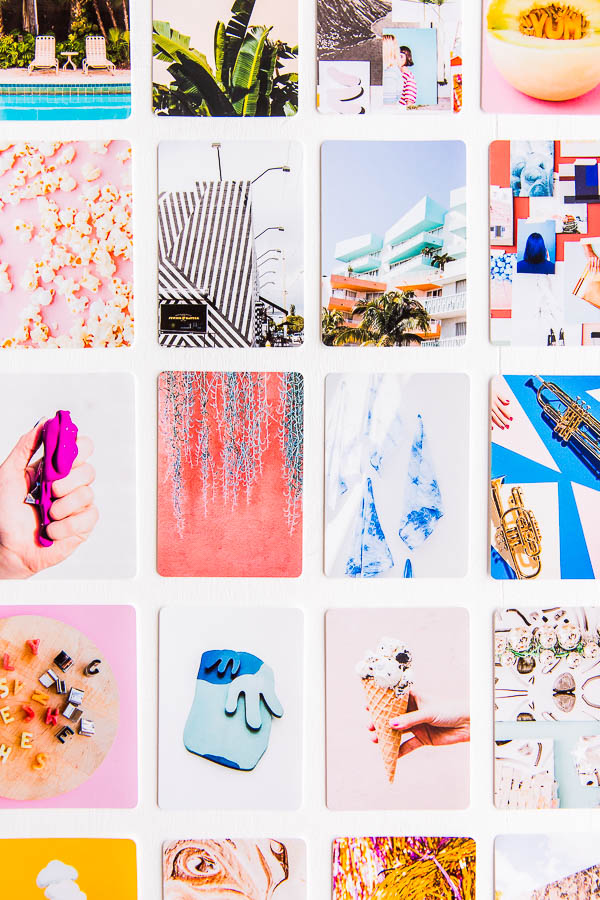 ‘Just the Tip’ is a new series that will feature just one tip on a new subject each month (or so) that I’ve found useful – topics will range from blogging to business to life in general. Hope you like it.

Toward the end of last year (right around the time I made the space-saving Christmas tree), I had a bunch of old projects printed and sent to the studio.

Which seems a little weird, now that I say it out loud. But I felt like I was starting to get into a rut and I wanted to be able to evaluate the work that I had done from that year in a more objective way. The idea was to have something physical I could pick up, look at up close, line up in a long row – to get a better understanding of what had already been done, what could use improvement, and what I should keep pushing.

Once everything arrived at the studio though, the photos just sat in a pile on my desk. For months. It is February after all and I’m just now writing this post. 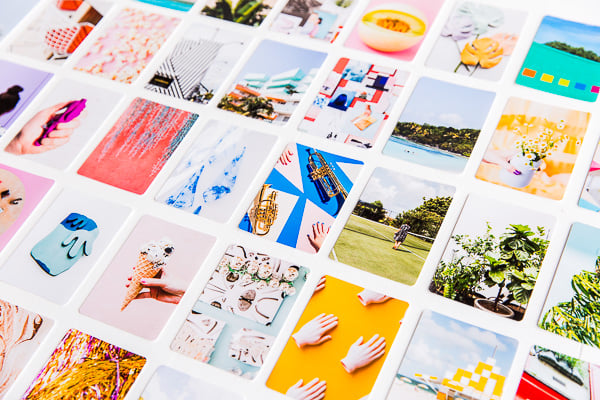 I think I had been avoiding it because I was nervous about what I would see. I assumed I’d be too critical of what I had worked on – only be able to see the flaws or worse discover that the work I had done lacked cohesion and I hadn’t learned anything since college.

Back story to the cohesion thing… One of my college professors (that I really admired) once told me that my paintings made it look like I was schizophrenic. WTF? I learned later that what she actually meant was the 10+ paintings I had carefully placed onto the uneven easels at the front of the studio, ready for critique, looked like they had been painted by different people and I needed to find a theme to explore more deeply throughout. What I heard was that she thought I had no talent and would never amount to anything. As you can imagine, I felt completely crushed that day and for many days after BUT that sentence, that I can still hear in my head oh-so clearly, also helped me realize the importance of cohesion and has stuck with me ever since. 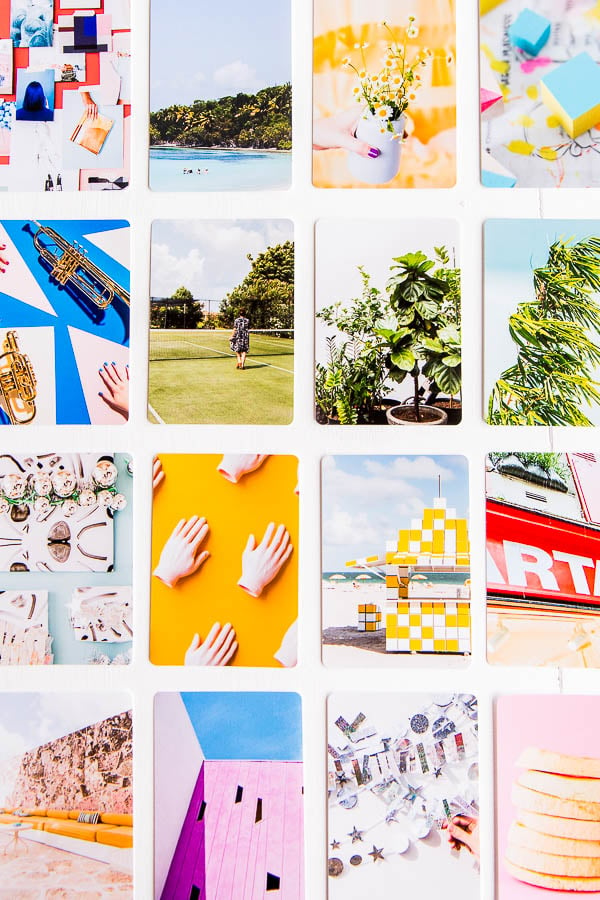 ANYWAY, back to the task at hand… I finally put that pile of prints to good use, laid everything out, and evaluated what I worked on in 2016. There were some hits, some misses, some misses that strangely still felt like hits, and a whole lot of in betweens.

I loathe the in betweens, so I dealt with those first. Then moved onto the hits, followed by the misses (which stung a little bit). And then there were the misses that felt like hits… The ones that you feel good about / really love, no matter how many Pinterest statistics tell you that it really just didn’t fly.

And after going through everything with a more objective eye, it felt pretty good to have done it. It was sort of like a weight lifted off of my shoulders. Something I could keep in mind for the future, but also move on from and feel like I was getting a start fresh start. 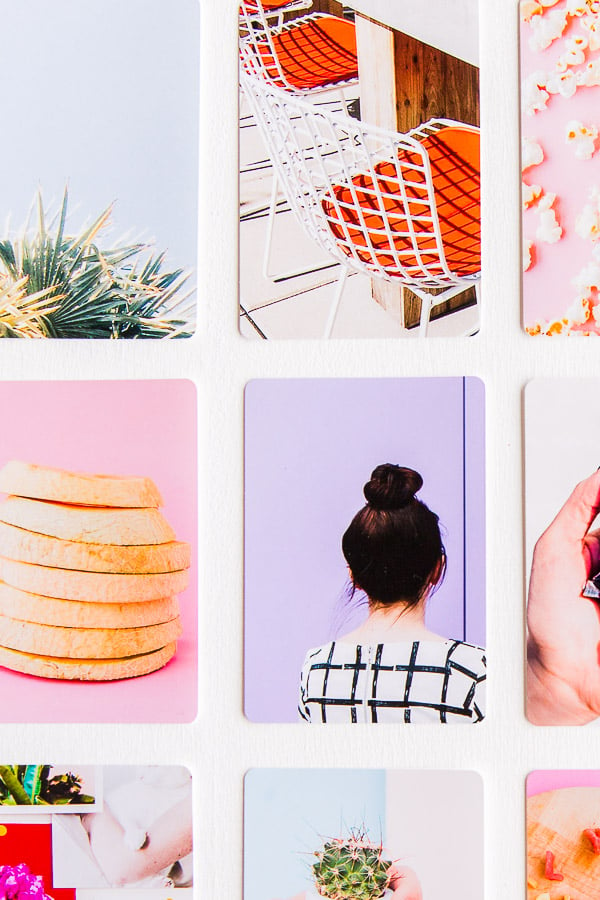 Soooooo….I guess you can say I’m a pretty big fan of (objective) self-evaluation. And I wondered if the collective ‘everyone else’ also regularly evaluates the work that they put out. Of course we all think about it when we’re in the act of making – do I like this, will other people like this, does this serve a purpose, etc, etc. But what about after….like WAY after? Maybe even in an attempt to pull yourself out of a rut? It (kind of unexpectedly) worked for me, so if you haven’t tried it, it might just be worth a try!

< previous post8 DIYs to Try This Weekend
next post >Bead It, Just Bead It: A (Beaded) Monogram Place Setting DIY for Dinner Parties

what did/do you use to print these?

[…] Just the Tip is a new(ish) series that will feature just one tip on a new subject each month (or so) that I’ve found useful – topics will range from blogging to business to life in general.  […]

Just The Tip: The Simple (but Important) Lesson I Learned from a Ceramics Class - Paper and Stitch

[…] took all of the photos that I shared in the new Just The Tip column and put ’em on the wall so I could see past work more clearly. I think I said this in that […]

[…] decided to move out of the only home we lived in since moving to ATL, and even started a new column that I’ve been meaning to for like […]

A combo of the two, Kimberly. Some just feel like misses to me because they felt boring to me and others were just clear bombs based on analytics. 🙂

I love the idea of printing out your work to take stock of things. I’m going to have to do that. I recently took a first pass through one of my online portfolio sections. I need to go back through to really narrow it down to the best of the best and those images that really speak to me. It felt good to do the exercise. I love seeing the cohesion in your work. You know I’m a huge fan. I’m curious to hear what you consider misses. Are you basing that on analytics or ones where you look back and think, “meh”?

Awesome Kait! Happy to hear that. And what you’re saying makes complete sense. In a strange way though, I feel like the self evaluation stuff has actually helped push me out of a funk, which I wasn’t expecting. It was kind of a freeing exercise. Anyway, thanks for stopping by and leaving your thoughts. 🙂

Can I just say the name of this series is making my Wednesday? BECAUSE IT IS! Self evaluation is so important, but I always put it off, too, because like you – I don’t like being critical of myself for fear of pushing myself to some sort of weird funk. Does that make sense? Regardless, I always LOVE your projects and coming to your space makes me smile!

So happy to hear that this is helpful in some way, Natalie. Thanks for letting me know.

Love this, I’m trying to be more selective about what I put out into the world so I looking to be better at self evaluation and this has been so helpful. Looking forward to seeing the rest of this series!