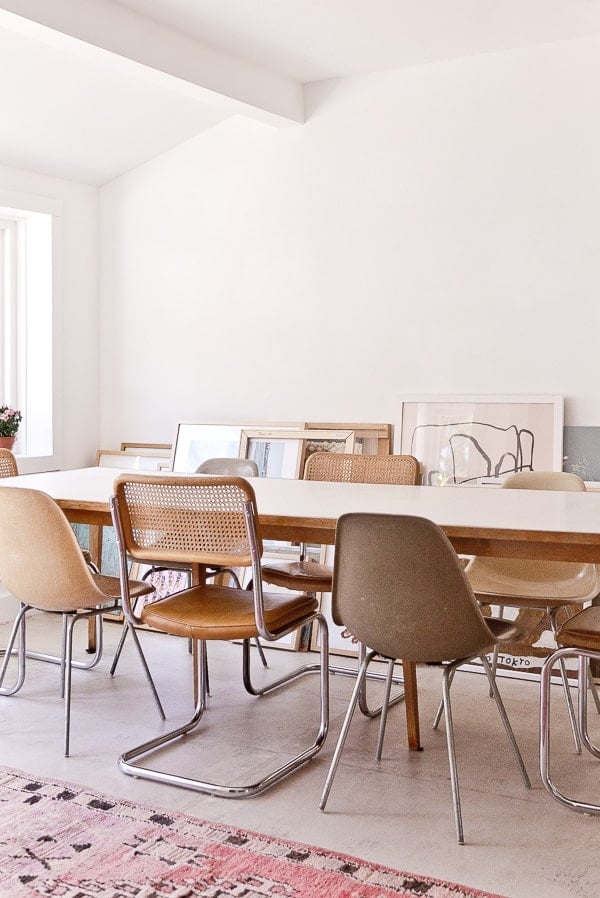 This post is long overdue, considering we actually moved a month ago. But for anyone that doesn’t follow along on Instagram and maybe didn’t know… Surprise, we moved to California last month!

And oh yeah, when we arrived, our place was (and still is) partially under construction. It’s been a pretty wild ride, so far. So click through if you want to see the before photos of our new place, why we moved, and everything else.

I’ve been sharing a lot of the progress on Instagram, so if you’re not already following @paperandstitch over there, head over for video updates in stories. That’s where the above dining room photo came from, since we have all of our stuff now and can actually start decorating.

First things first, I should probably mention that this is a rental. We did not buy this house.

So the fact that the back house and yard were completely gutted when we signed the lease is probably a little crazy to some. You’ll have to scroll down to the before photos to see just had far gone it was outside when we looked at it. Haha. And honestly, it was a little crazy for us too. But we decided to take the risk. I’m still slightly up in the air on whether that risk paid off. BUT when the construction is finally done, and we can use the backyard and back house, I imagine it will feel a whole lot less risky. Haha.

Construction has only been happening on the back house, which was actually a garage before all of this. But the owner / landlord wanted to convert it into an ADU. If you’re not familiar with this term (I wasn’t either before looking at places like this), ADU stands for accessory dwelling unit, which basically means a secondary house / apartment that shares a lot with the primary house that can be rented out separately.

So when we originally looked at the front house to rent and saw there was a back house that would be rented by someone else, it felt like a complete dealbreaker. Apparently, ADU conversions are really common in LA because there is a constant need for more housing in this county, but wow. It felt pretty weird to us at first.

Also, the backyard was all torn up for plumbing and gas to the back house. And unrelated, the back fence was falling down and you could see directly into the neighbors yard.

Moving into a house with a toddler where the backyard would have to be shared with a complete stranger that also literally lived no more than ten feet away from us, was a major NOPE for us. But we casually talked about how maybe it could work if we decided to rent both the main house AND the back house, to eliminate that issue. That would mean more space for all of us too, which seemed like a smart move considering both Jeff and I work from home.

That said, this rental was not the one we originally picked. We found another house that we really liked that was super cute (but also had a couple major quirks to it), that we put in an application for but we didn’t get. Ugh. Even the rental market in LA is pretty competitive. Who knew?!

And after looking at a handful of other options, we came back to this one as something that would check enough boxes to work for us. It had a backyard, enough space for us both to work from home, was in a good neighborhood, etc, etc. So, we struck up a deal with the landlord to rent both…all while the back house / ADU was literally just a shell with some wall framing. No floors. No drywall. There weren’t even any windows yet. Haha.

Did it feel like the perfect fit? No. Are there a million things I would love to do to it to make it a better fit for us? Yep! BUT it’s a rental. And I’m really crossing my fingers that this will be the last rental before we buy a house again. And it works for now. So, I’ll be making minimal changes to some of the basic stuff I can (temporarily) change, and the rest will basically be a decorating challenge. Which I’m looking forward to.

Why did we move?

There are LOTS of reason, but this post is already kind of long and I don’t want to bore you. So, I’ll just list one of them. The biggest reason for moving to California is family. I’m from California (not LA – I was born in Stockton) and have always wanted to move back. Jeff also lived in California for a short time when he was little.

Once we had a kid, the idea of moving closer to family seemed more and more appealing.

For the most part, our families are in California and Florida. And we tried to make Florida work for so long – Jacksonville specifically. We moved around Jax trying to find the perfect spot, moved out of state (to Washington for a year), and moved back to Jacksonville to give it another shot. And it’s just probably not the place for us – never say never though.

So, California seemed like the best fit. My mom is within driving distance and can help with Hayes. And we have a few friends here too, which makes a huge difference. There’s more to it than that, but family is definitely the biggest reason.

Moving along, now that you’re all caught up on the house and the move, here are a bunch of before photos.

This is the entryway and living room. That big black box on the wall is an electric fireplace. It was super easy to remove though, luckily. 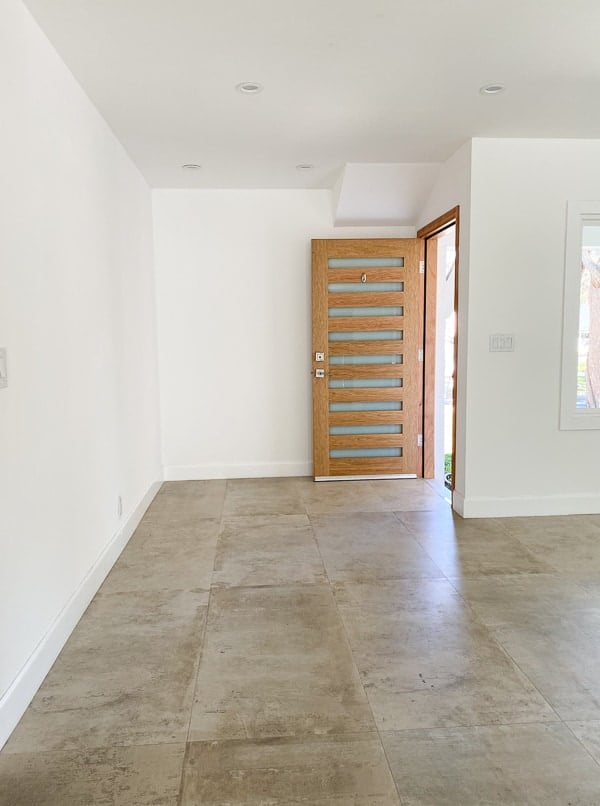 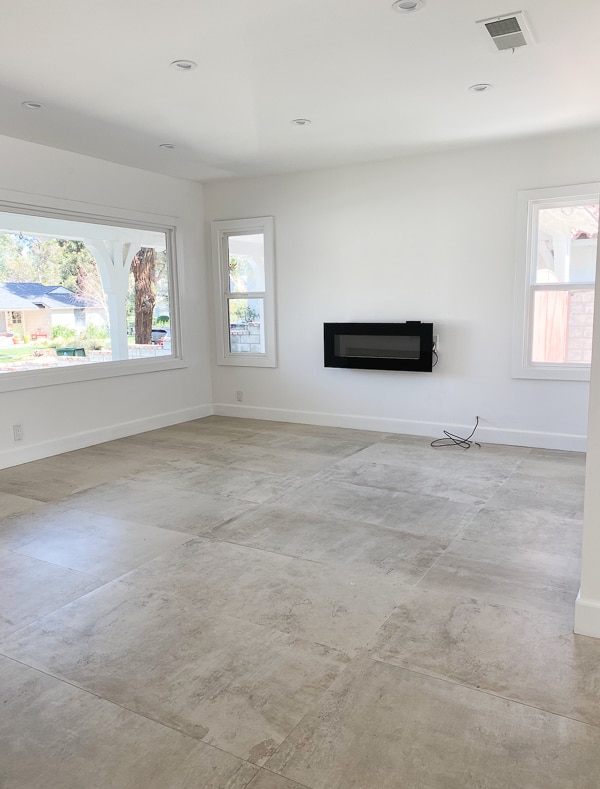 As you walk through the living room, there’s a dining room to the right and the kitchen to the left. The kitchen is pretty dated.

I recently found some old pictures of what the house looked like before the most recent changes and the kitchen looked a whole lot like it does now. They did update the countertops (which are nice) and the faucet. And the old cabinets were painted. But otherwise, it’s pretty similar.

Just for fun, in a dream world… If we had bought this house, I think I would have pushed back the living room wall to make that space bigger and this space a little smaller (maybe removing the wall altogether) and just gutted it. New cabinets, new counters, new appliances. I would have eliminated the majority (if not all) of the upper cabinets, do some open shelving on top, and maybe even replace the window with something larger and/or add a skylight or sun tunnels. 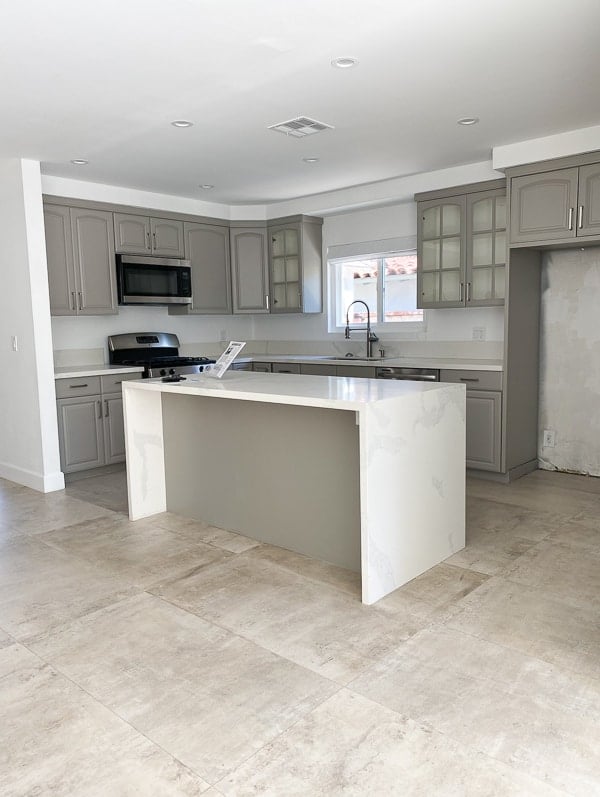 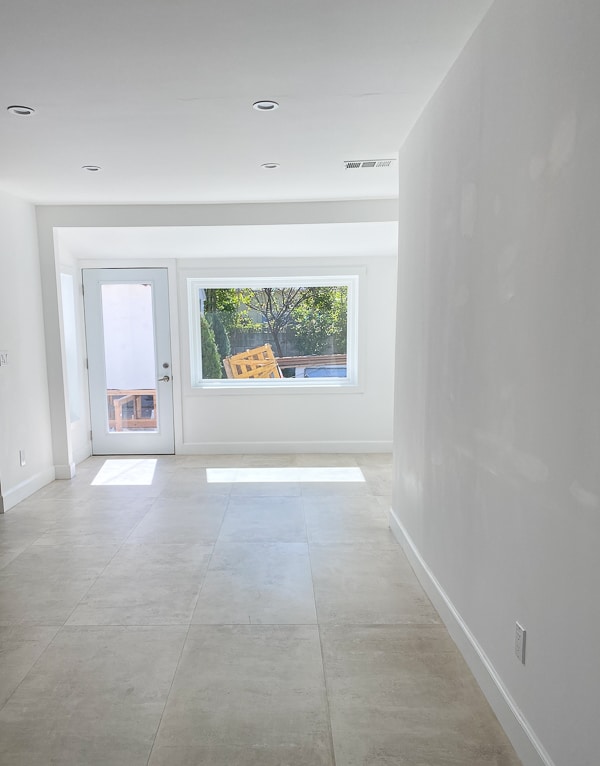 Below is our bedroom and Hayes’ room. These couple of photos were taken after we moved in, but before our furniture arrived. Hence the blow up bed, and the folding crib in Hayes’ room. My mom let us borrow her’s while we waiting for the moving truck (which took about a week to arrive), but it actually looks a lot like your crib for Hayes anyway, since it’s wood. Anyway…

The bedrooms are pretty basic – they have premium vinyl floors and mirrored sliding closet doors. Our bedroom is pretty large – there is another part of the room that isn’t in this photo) and Hayes’ room is just a little smaller than his old room. 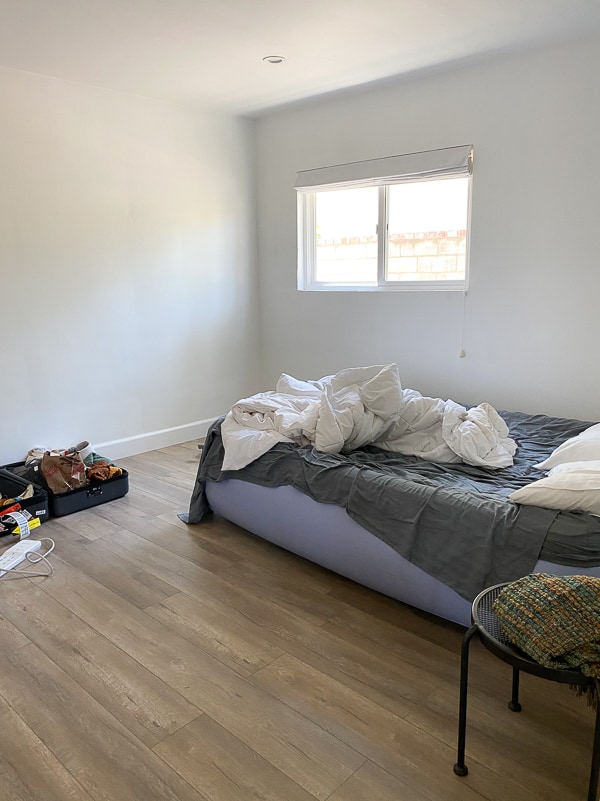 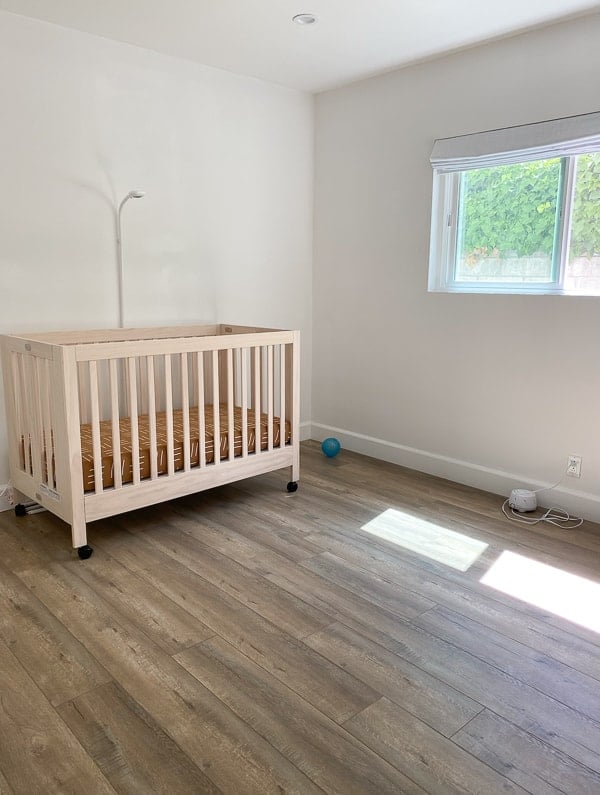 Here are the two bathrooms in the main house, which look pretty similar.

I would love to temporarily remove the mirrors in both bathrooms, but they have lighting built into them and are pretty heavy. So it’s not an easy job. Not sure I’ll be able to do much in either bathroom as a result.

Lmk if you have any ideas though. I would love to make some changes in these bathrooms to get them more in line with our style. 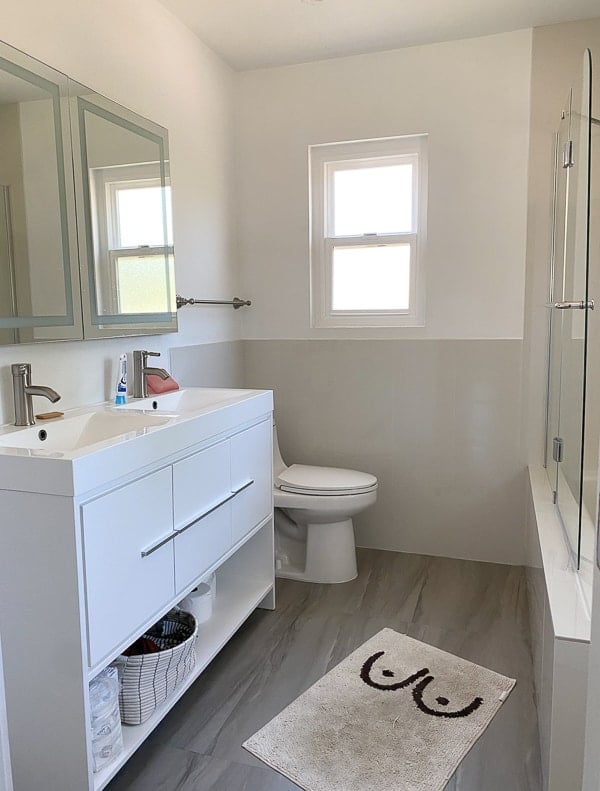 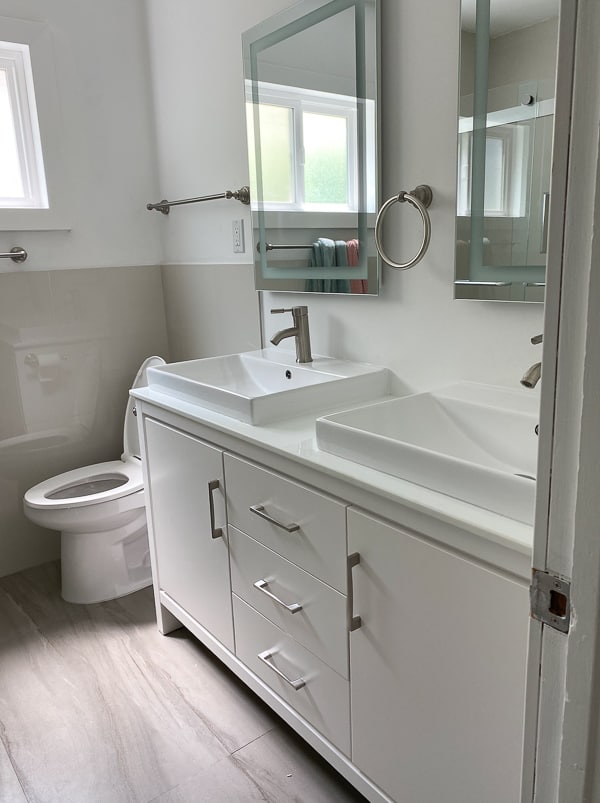 Below is the third bedroom in the house. We’re planning to use it as a family room. It gets the best light throughout the day and I’m looking forward to just hanging out on a super comfy couch in here and reading or watching tv. It has a sliding door that leads directly outside, which will be really nice when the yard is usable!

That little stove thingy in the photos will be removed and stored until we move out, so we can use the space entirely. It’s a very small stove, but it comes out from the wall (behind it) a few feet. So removing it will add a little more usable space, which is nice. 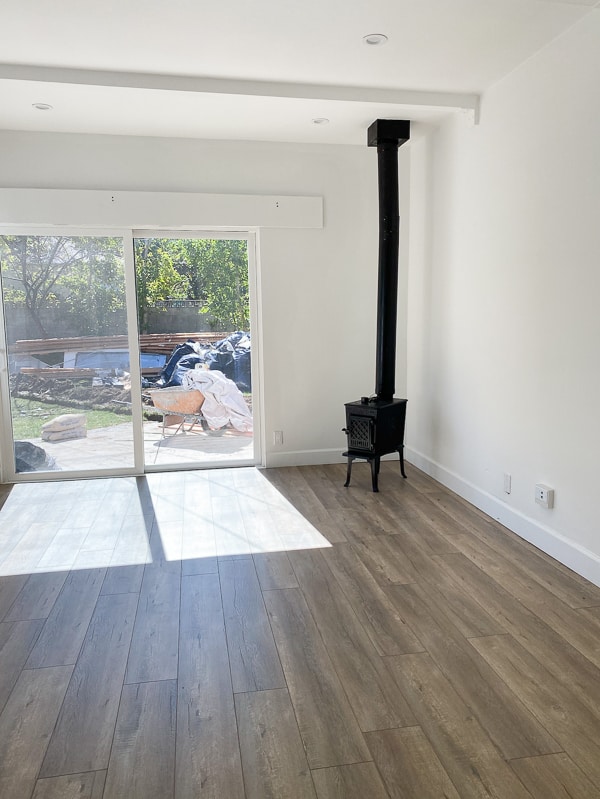 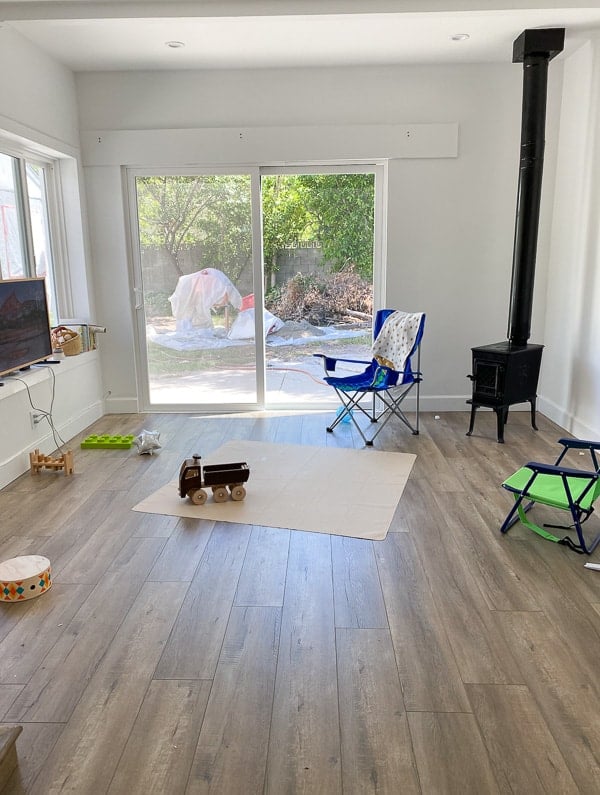 Moving onto the backyard and back house / ADU… 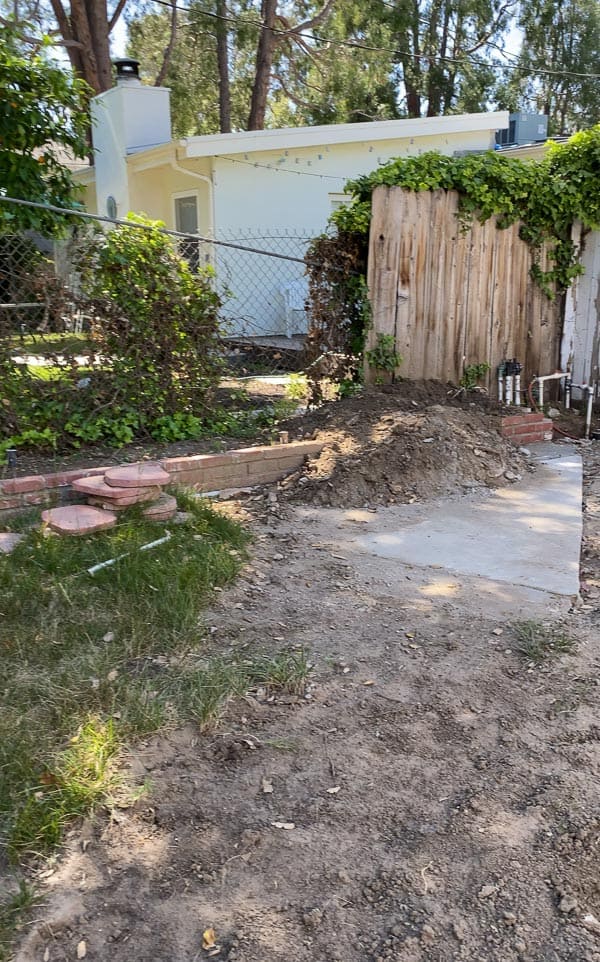 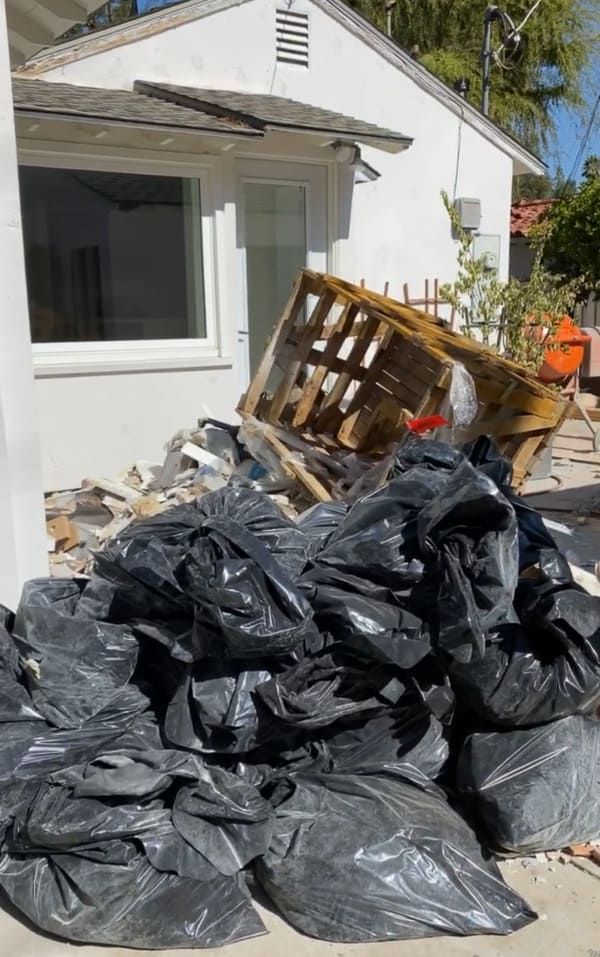 And here’s what the garage / ADU looked like when we looked at it originally in February. You can see that the framing had been completed, but that was pretty much it.

The bottom photo, that is closer up on the interior is looking in from the bedroom and you can see where the bathroom, washer and dryer nice, and kitchen would be from there too, on that back wall. 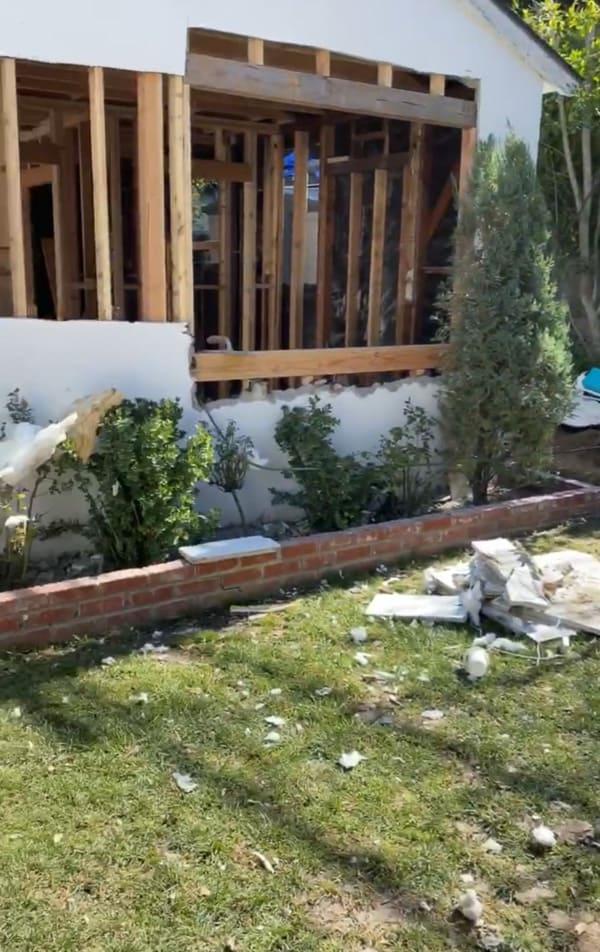 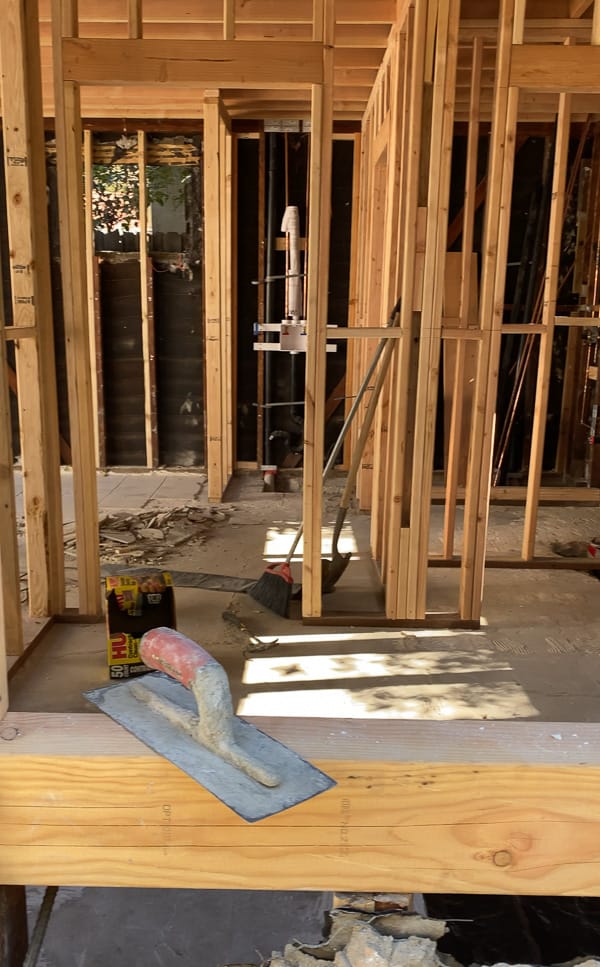 It looks very different now than it did then, but I’ll wait to share the rest of the progress photos since this is just for the befores. If you don’t want to wait though, I’ve shared a lot of progress stuff here on my stories.

For now, that’s it for the before photos. Can’t wait to finish decorating and sharing everything as I go. Let me know if you have any questions about anything…or any ideas for temporary decor fixes that you’d like to see.

Thanks Karlijn. Yep, definitely felt like it was worth the risk. Still figuring out if that’s the case. But so far, we’re making pretty good progress. 🙂 Happy Friday!
-Brittni

Woaaa, well it looks super exciting! Yes, there will be a lot of work to be done, but I’m sure you will use your magic and it will be soon be completely cool and beautiful like your last house. And if not, that’s okay too. Sometimes you have to take a risk right?! Good luck and I hope it will all go well 🙂