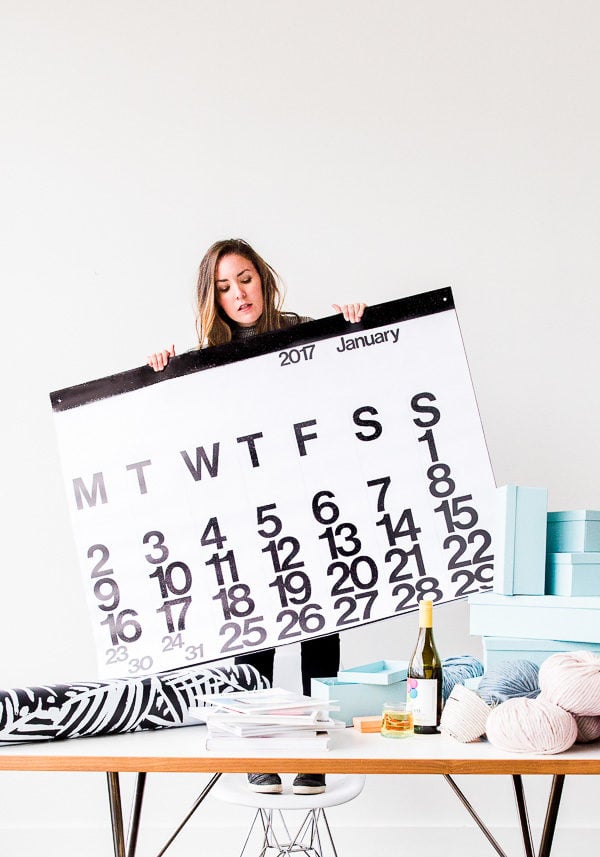 I had planned to kick off the new year with a little P&S retreat, but with working on a new hire and general January stuff, I decided to keep things simple and have a day of planning, organizing, and prepping for the new year instead. It was actually perfect because the studio really needed a refresh and my mind needed it too. So, win-win!

And today I’m sharing a peek into that day, along with 7 tips for a fresh start in the new year, in partnership with Seven Daughters. There’s some cleaning, organizing, some self care – Stephanie (who runs social media around here) and I did it all!

Click through for all 7 tips (and a few outtakes just for fun). 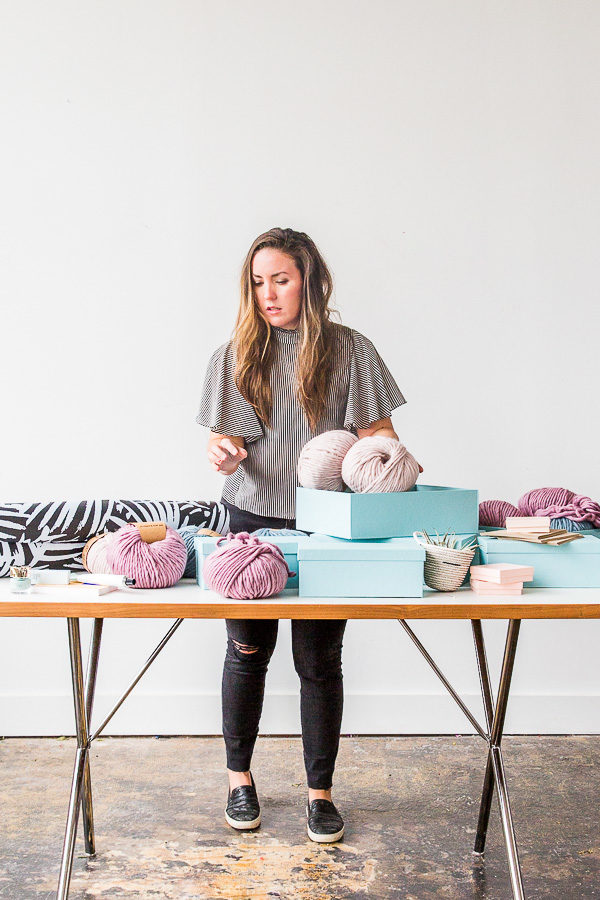 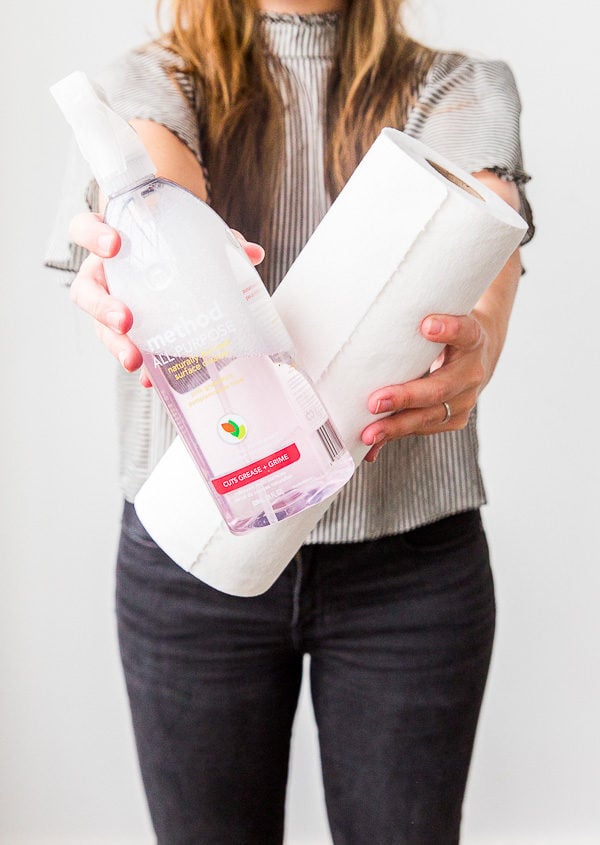 1. Do a deep clean. I don’t always love doing these kinds of things, but when they’re done, I LOVE it! A really good deep clean (sweeping, mopping, scrubbing – all of that stuff) is such a good way to start the year. And then you can get to the real fun stuff with a clean slate. 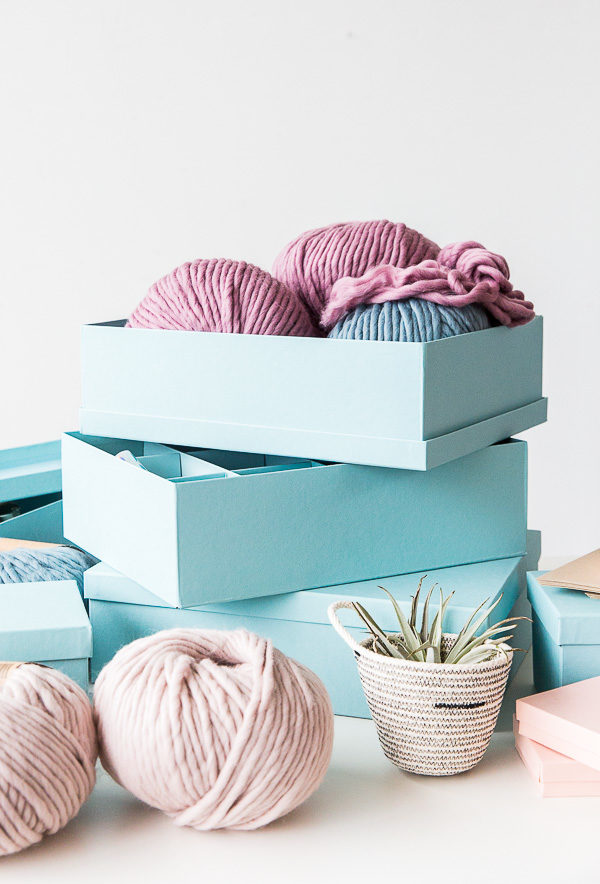 2. Next on the list is organizing. This is a big one for me, especially after the holiday craft storm rolls through in December. I picked up a bunch of boxes from Ikea and even a handful of majorly discounted gift boxes from Target (they were 90% off after Christmas!) and started sorting all the loose items that have gotten away from me over the last few months, mainly yarn at the moment (I have so much yarn for a new project I’ve been working on) and lots and lots of other craft supplies too!

This is where we got some Seven Daughters wine involved, because hey, we made it through two whole tips and deserve a celebratory drink. You gotta have some fun with this stuff right? Otherwise, you may end up gouging your eyes out from the boredom of it all. And we can’t have that!

I’ve been increasingly more open to drinking all types of red wines, but on this particular day, we went with all white wines…specifically Moscato (which I think is my fave from Seven Daughters) and Chardonnay. 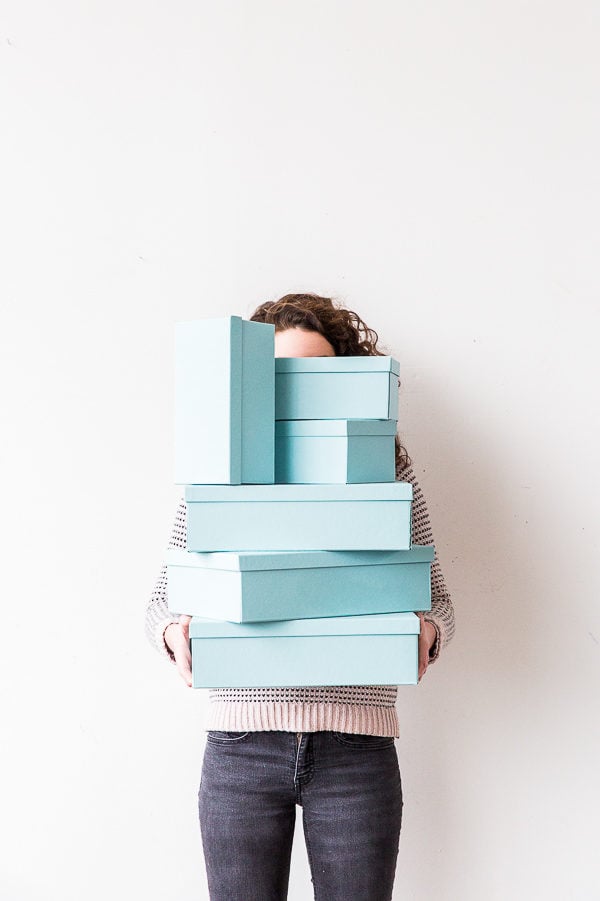 3. My third tip is finding a place for everything, which I guess technically goes with the organization of number two. But I’m making it separate because it feels good to cross things off a list, right? So there, you go! Number three is basically already done.

Since the craft closet was already packed to the gills, Stephanie found a good spot for all of the boxes underneath the stairs. They’re easy to get to, but out of the way. Side note – I realized while editing these photos that Steph and I were wearing really similar outfits – black jeans and striped tops of the win! 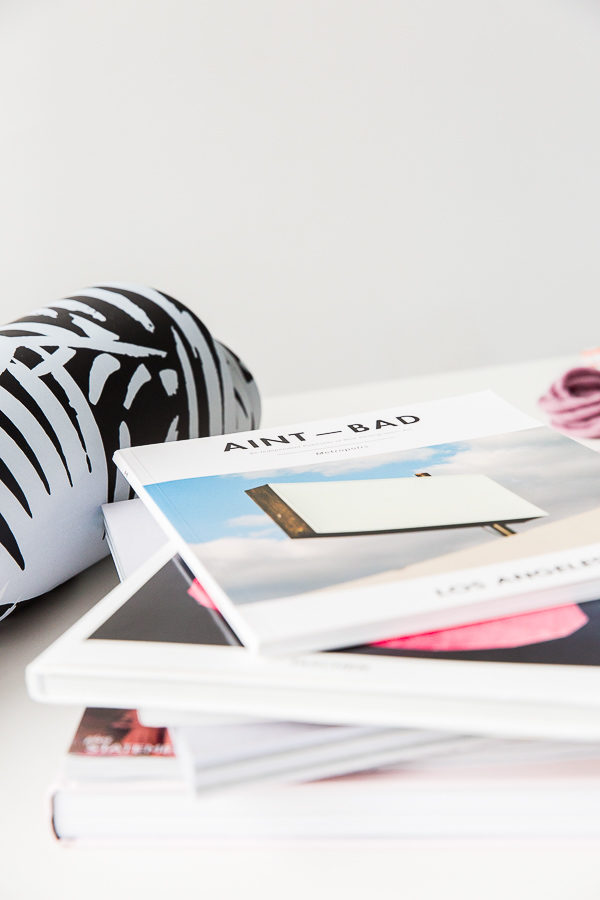 4. Step away form your screen. If you are feeling uninspired or bogged down, playing catch up, one of the best things you can do is step away for a bit. Do something fun, read a book, take a nap, or do nothing at all – as long as it doesn’t involve a computer, iPad, phone, or tv screen it’s fair game.

I’ve realized recently that I HAVE to get away from technology more often this year, so I can free up my mind to see the big picture and plan for the future instead of just working in the day to day. So I’ve been taking a few minutes each morning and afternoon to close my laptop, recharge, and get inspired. Sometimes I just sit on the couch for a few minutes and stare at the ceiling, sometimes I look through magazines, read a book, etc. So far, so good! I really like the quick screen breaks throughout the day. 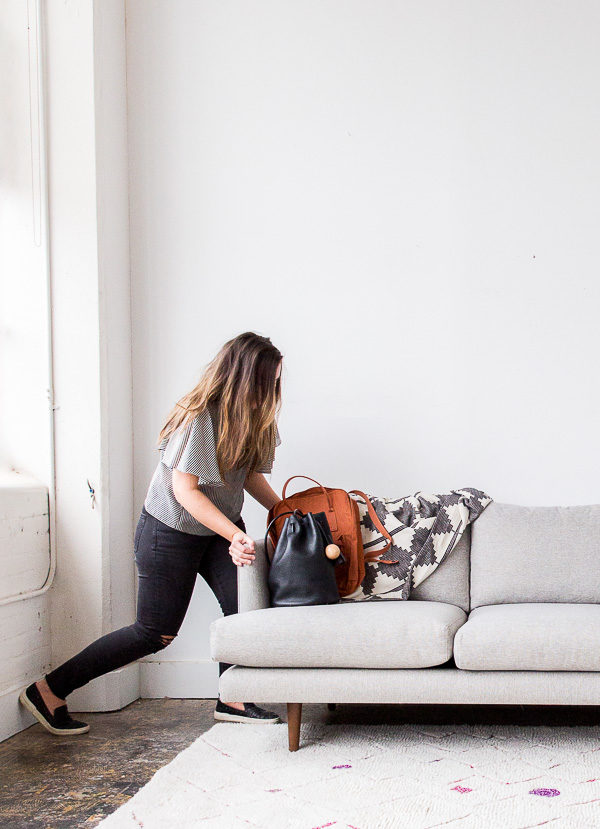 5. Change things up. Once all the boring cleaning stuff is done, I like to start off each year with a change (big or small), and I think a lot of other people do too – think bloggers usually launching redesigns in January, etc. A fresh start to the new year makes things feel like everything is possible again (I love that feeling, don’t you?), so I always make some kind of change at the beginning of the year to launch in that direction.

This year, a couple of my January changes are working on (minor) changes for the site and rearranging some things at the studio (I even thought about changing studios, but I just couldn’t find one I liked as much). Most of those things are still being worked on, and I wanted to do something that I could immediately see a difference in (there’s really something to that instant gratification thing) so I rearranged the furniture. Which mostly involved pushing the couch from wall to wall with everything I could muster. It was a good workout. 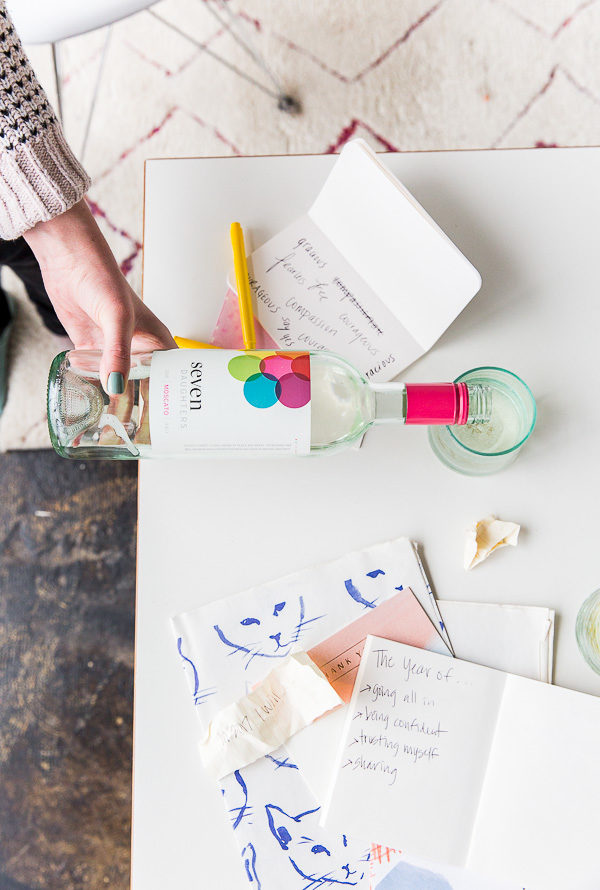 6. Start with a word. Define what you want to get out of the new year in a single phrase or even a word. This might sound like a hard way to kick things off, and honestly it might be for some. So if it’s too much for now, skip it and come back to it later. BUT if you’re willing to give it a try, here’s my tip… It 100% does not have to be a life-changing, mind-altering ‘I’ve learned all of the mysteries of the world’ kind of moment. Though I guess it can be if that’s what you really want.

It can really just be a quick thought you had or a characteristic that you admire in others that you hope to see more of in yourself in the new year, etc, etc. AND it can change throughout the year too – no need to lock yourself in, if you’re not feeling something anymore. Right? It might also help to break out the wine again for this one, if you’re feeling stuck. Are you sensing a theme here?! 🙂

To give you a couple of quick examples, I’ve simultaneous declared this the year of ‘realizing stuff’ AND ‘not giving a f***’ for myself and as basic and borderline idiotic as those phrases may sound to one person, to the next person (i.e. me!) it resonates. What can I say, I like the uber simplicity of each one and while they’re extremely basic, there’s more to ’em than just the surface of each phrase and I’m starting to crack through those already. Which I’m kind of pumped about. 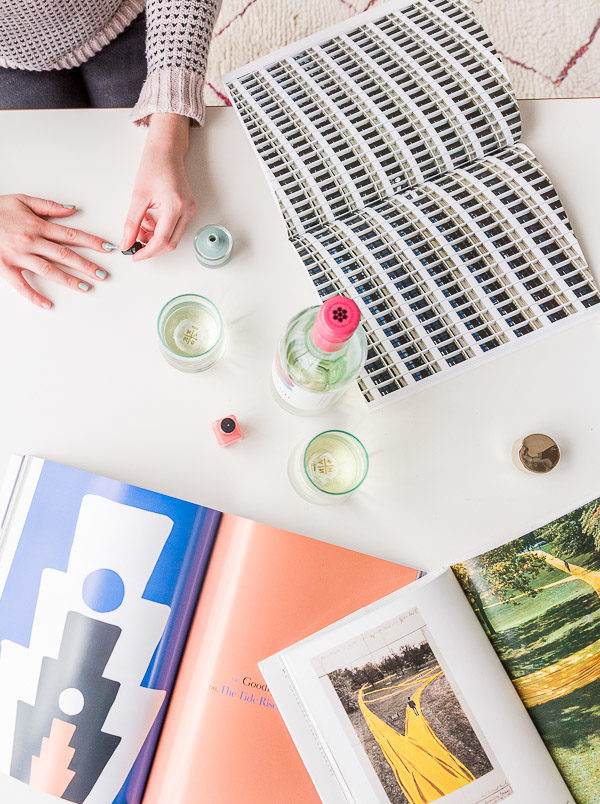 7. Last, but most definitely not least (in fact this one should probably be number 1 on the list), take some time for self care. This is a big one that I’m trying to tackle in the new year. And while it’s admittedly not as easy for me to work on as I hoped, I’m getting there.

It’s hard to focus on taking care of yourself sometimes when it feels like you’ve got a million things going on around you. And if I’m being honest, running this little business often has me avoiding things that I really should be doing for myself, even just simple things like actually doing my hair each morning instead of tossing it up in a bun or going for a run to clear my head and get some exercise. Most of that stuff ends up feeling like a hassle because it takes ‘too much time’, but I’m trying to get better about that this year and make it a priority again. Maybe you will too? Let me know!

Anyway, those are my 7 tips for starting the new year off fresh, but I’m really curious to know what you do at the beginning of the year to get motivated, excited, etc too. So feel free to share your thoughts in the comments below. Would love to hear! 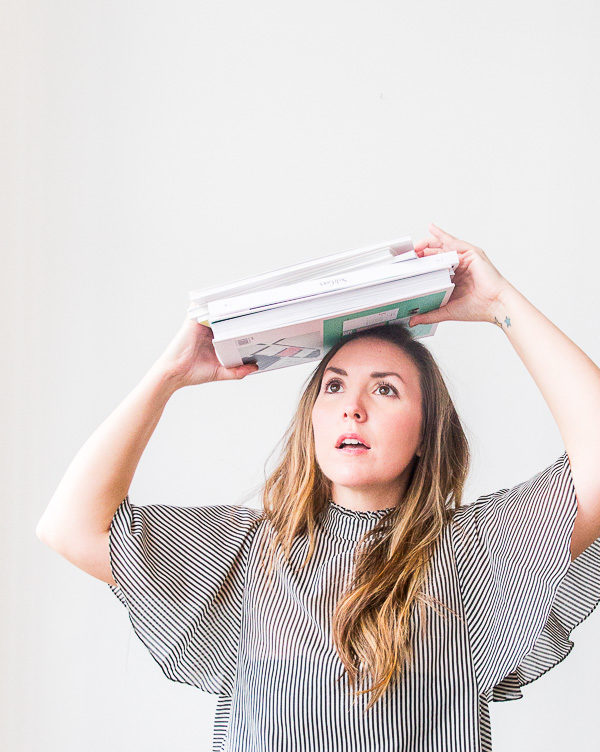 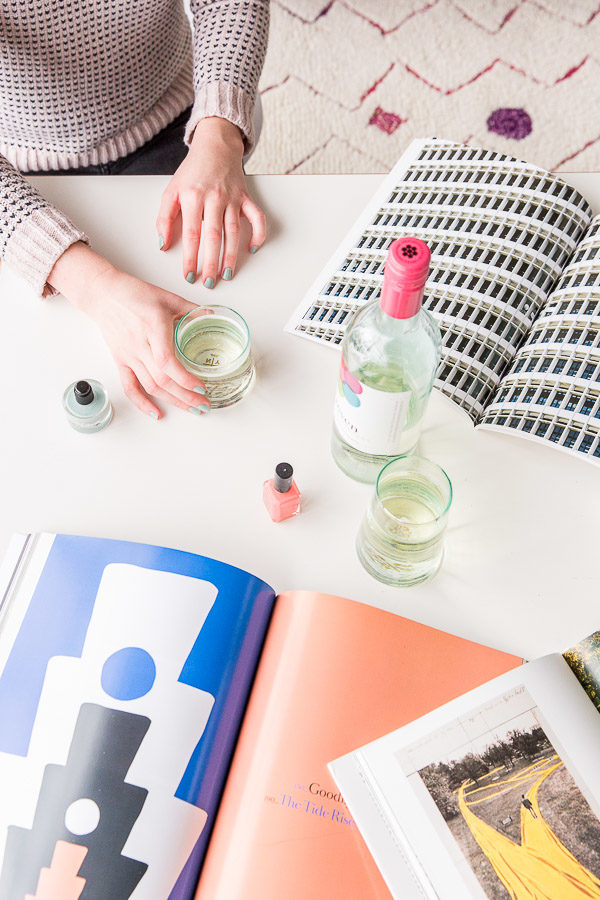 How do you usually kick start your new year? Any tips to share that I might have forgotten?

This post is in partnership with Seven Daughters. Be sure to follow Seven Daughters on Facebook and Instagram for hosting / entertaining ideas and more. All opinions are my own. Thank you for supporting the brands that help keep Paper & Stitch running.

I think it is great to start off the new year fresh. Doing a deep clean is a great start, purging items not being used, setting new goals, etc. Great tips on how to get started, thanks for sharing!

These are wonderful and very “doable” tips – thanks! Yeah, I’ve been deeeeeep cleaning my closets and studio recently. It feels so good to donate unused goodies. And, one thing that I really enjoy while prepping and working, is burning a lovely new candle! I suppose this can go hand-in-hand with your wine idea… Thanks again for sharing! RL

Your tips are amazing, I like these types of ideas a new fresh start! I Thanks to share it.

Amazing tips! I’ll definitely try to apply them. I love your pictures x

Your tips are wonderful, especially the one about stepping back from your screen to get your motivation/creativity back! It’s so important!
https://www.makeandmess.com/

I love your styling execution of this post Britt! So good! And your tips are spot on. This is also my year of not giving AF. 😉 x

Great tips, Brittni! I love that this is your year of “not giving a f***.” My favorite word… 🙂 I like to start the year off by buying a pretty planner and putting dates that I’m excited about in it. It makes me excited to jot down my to dos and gives me something to look forward to.

Love this so much! Still trying to get into the New year organization! Finding a place for everything can definitely be tough for me. “Organized chaos” is basically how my life is 80% of the time, but striving to take the “chaos” out. 😉

And taking time away from screens! Also so important, especially in this line of work!

Such a fun post! Reigning in the new year can be exhausting, but this was helpful and fun.

Love this and your photos for this are so so so good! Good luck with your fresh start on the new year – I hope it brings lots of good things!

I always deep clean and organize at the start of the new year – it feels so good to have a clean slate! I tried reorganizing my furniture recently but my roomie was not feeling the new arrangement… will have to try again next year!

Loving these tips! Stepping away from the screen is FOR SURE something I need to get better about!

Yes to a deep clean! My husband and I are in the process of that and getting rid of/donating things we no longer use or need! It feels sooo much better to work in a clean, friendly, and decluttered environment.

Love these tips, I have been trying to give my house a deep clean and an organise since the new year 🙂

Such a lovely post, I feel the same way, I like the idea a new fresh start! I love changing up my space and clearing up my wardrobe every year.