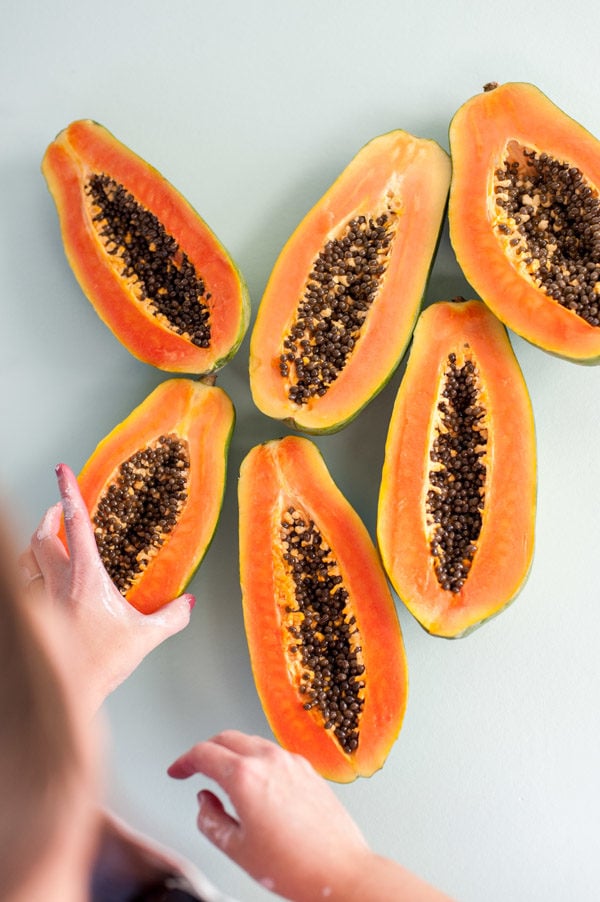 There have been a lot of random happenings in the studio (and out) lately.

So, I thought I’d share some behind the scenes snippets…Including the time I spilled 2 galloons of paint in the driveway, a botched project that never saw the light of day (until now), papaya outtakes, and more. 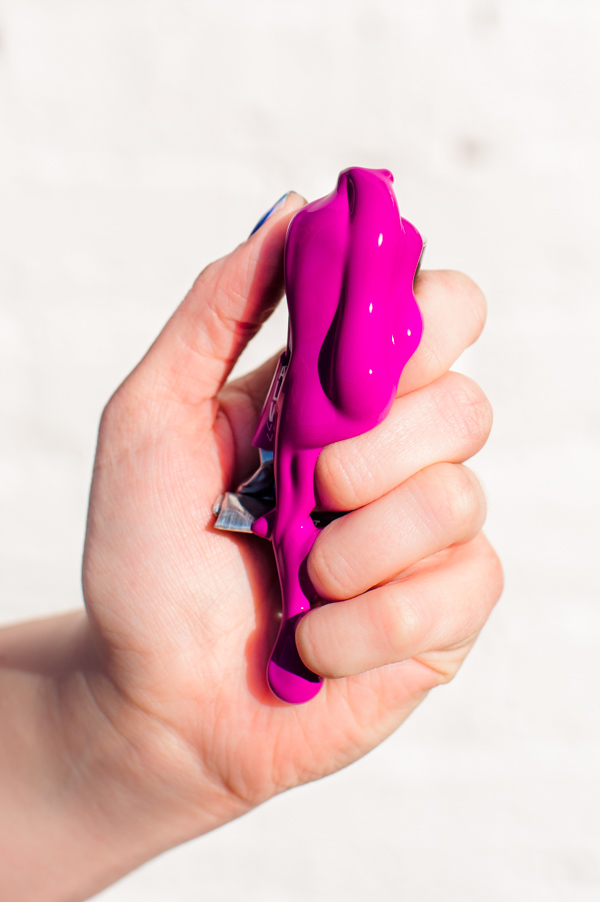 Outtake from the brushstroke nails shoot. I loved this photo, but since you literally can’t see any part of the nails in this one, it didn’t make the cut. 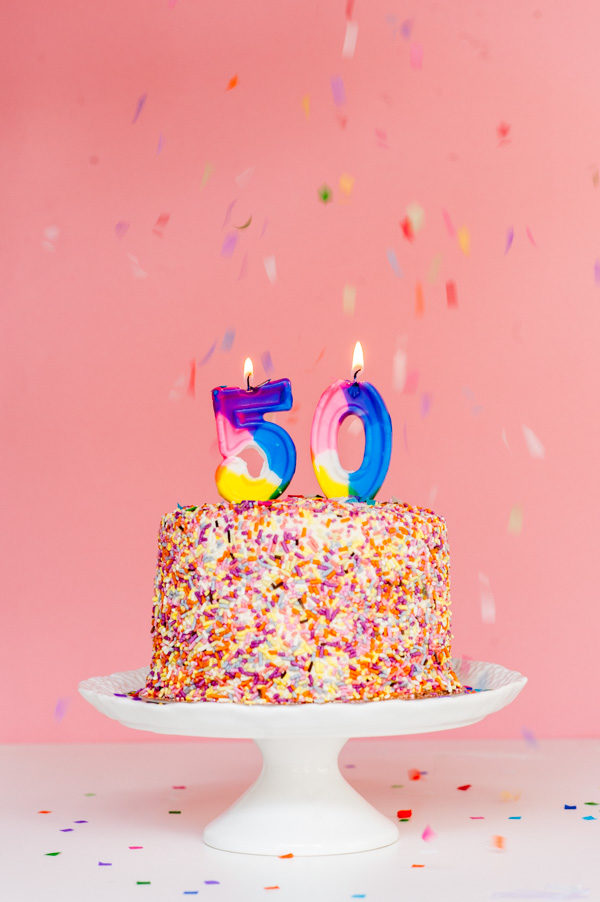 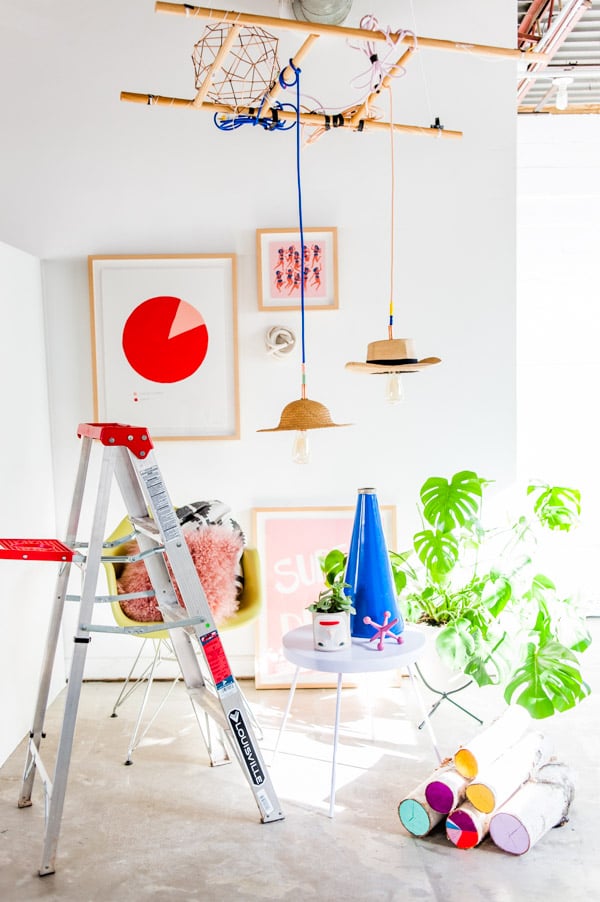 When you need you DIY vintage hat pendant lights to hang in a very specific area, that doesn’t have rafters, you get creative.

If you’re wondering exactly what the hell is going on here, don’t worry, I am too. 🙂 Just kidding, I know what’s going on here… We attached my DIY blanket ladder to the ductwork and then hung the pendant lights from the ladder. 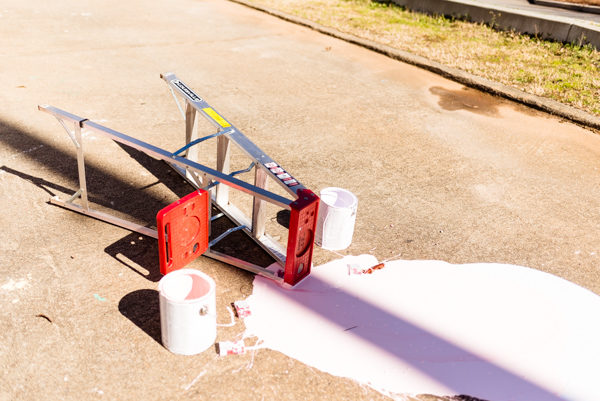 If you follow me on Snapchat, you’ve already heard the sob story about the paint spill. But I never explained WHY 2 galloons of paint ended up spilling, right next to a knocked over ladder.

Long story short, you should never use completely full paint cans to weigh down a ladder that is holding up a large piece of drywall / backdrop. Especially when it’s windy outside. 🙁 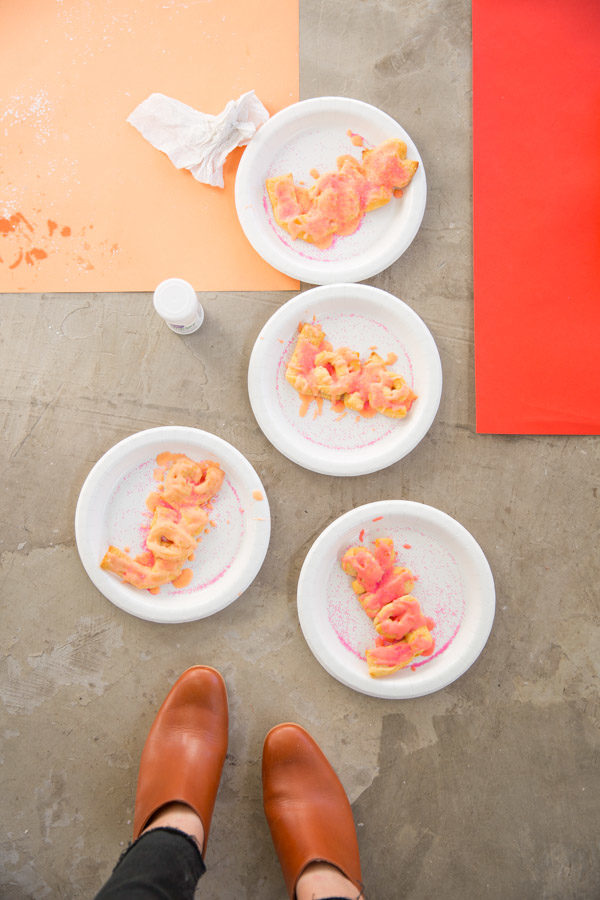 Sometimes the idea of something ends up being MUCH better than the finished product. And that was unfortunately the case for these ‘LOVE’ crescents. Anissa did an awesome job on them, but once we added the glaze and sprinkles, it went downhill. Actually, that’s completely my fault. I’m the one who added it. Dumb move on my part. Hard to read what it said after adding the glaze and it just didn’t photograph well.

Luckily, we had these funnel cake love letters as a back up and they turned out great. 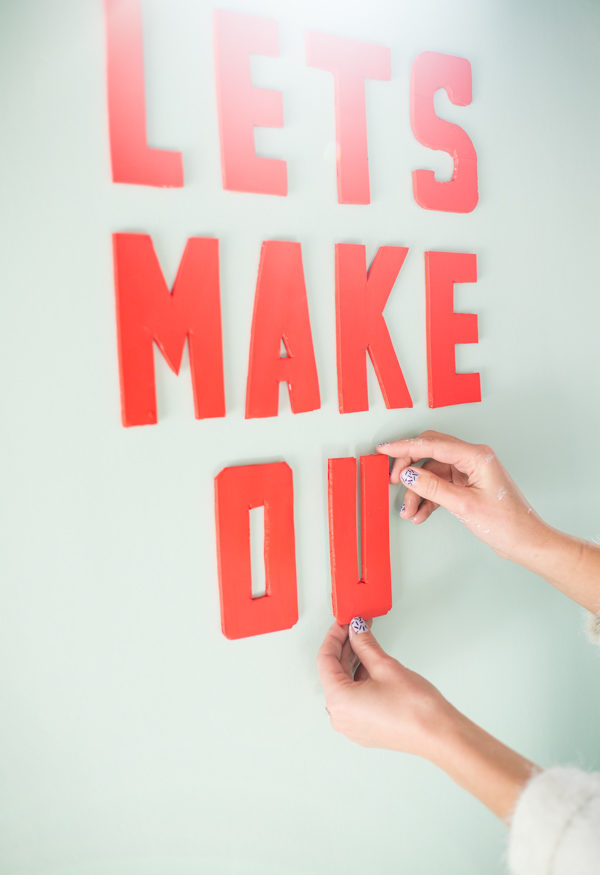 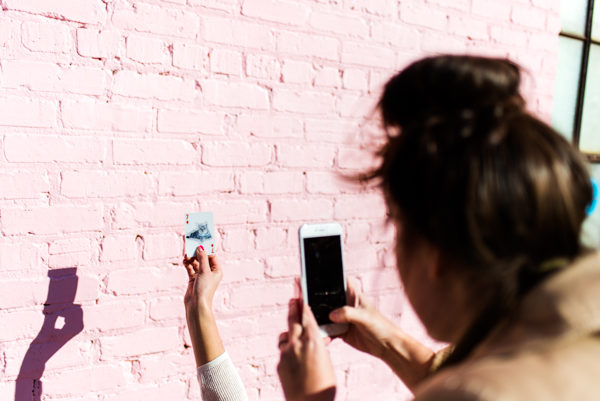 Evidence of the fact that I really do only have two hairdos at work. Bun #1 in full effect, while I tried (unsuccessfully) to get an Instagram video for this nail tutorial. 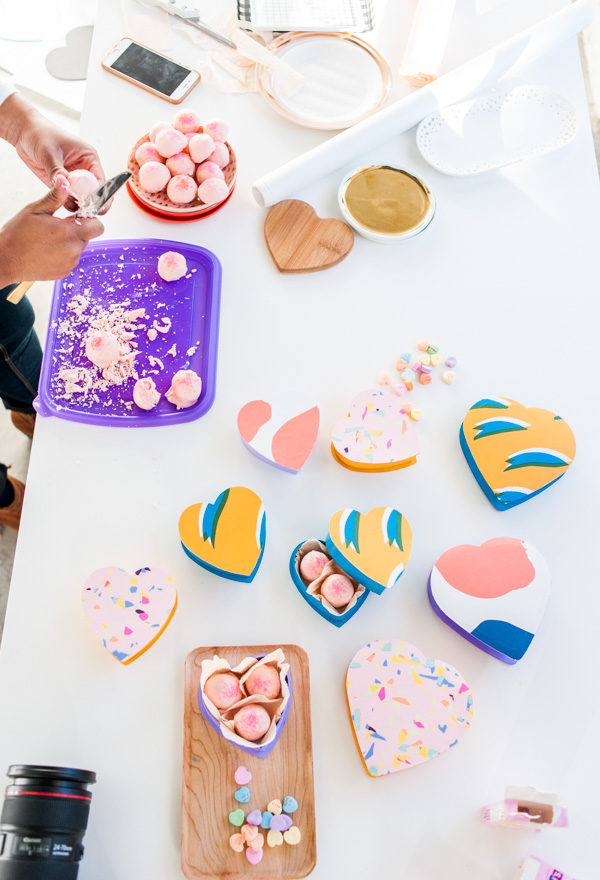 Anissa tirelessly working on shaving the bottom parts of the chocolate with a knife, so that they were perfectly smooth for the V-Day candy boxes DIY. 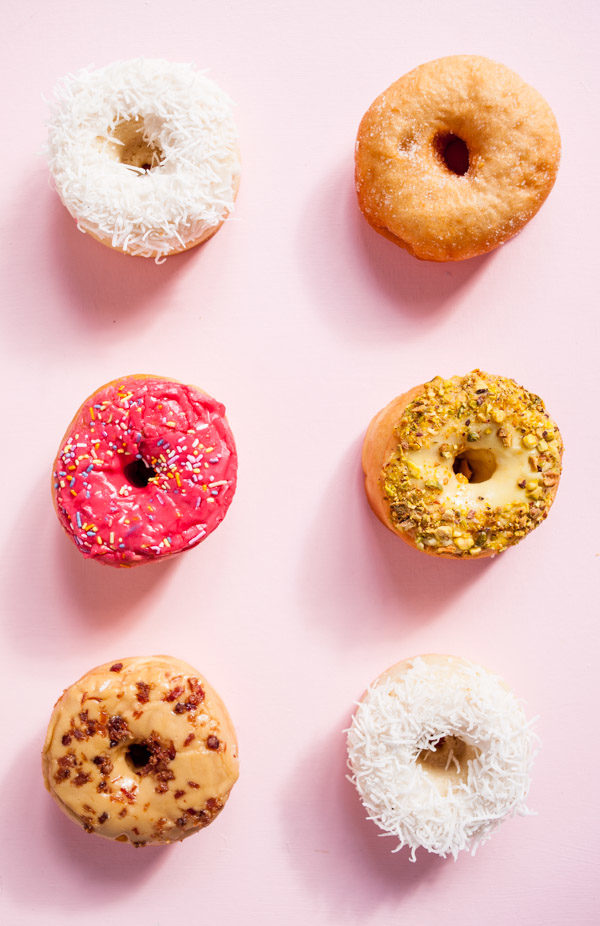 Leftover donuts from the breakfast in bed shoot. Yum! 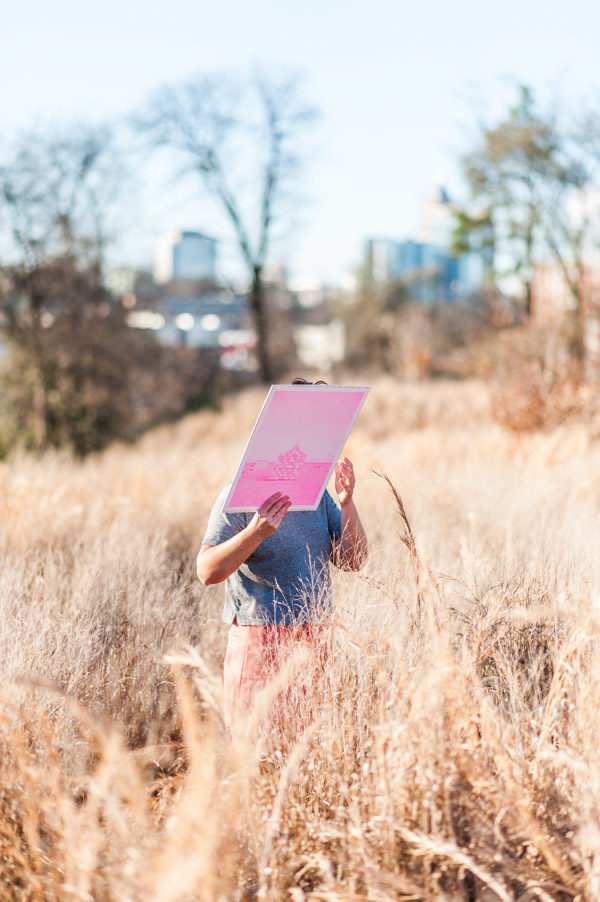 Trying to figure out exactly where I should be in this field of tall grass, so that no one can see me. Hadn’t figured it out at this point. Here’s how it turned out though, in case you’re wondering. 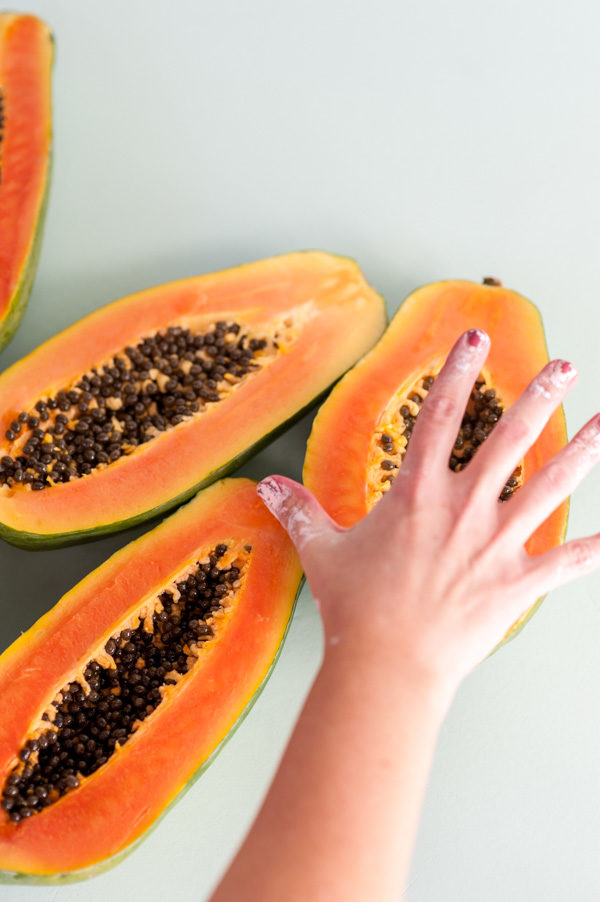 And last but not least….papaya outtakes! We bought 6 or 7 giant papayas to play around with for this post and then we only ended up using one. Ha! Of course that would happen.

Naturally, I had paint all over my hands while styling because it was the same day as the great paint spill of 2016.

What kinds of things have you been getting into lately? Anything strange / crazy / funny to share? I’d love to hear about it.

Photography by Amelia Tatnall and Rachel Brewer and me

< previous postHomemade (Mixed Berry) Pop Tart Recipe
next post >Take a Seat: How to Make a Budget-Friendly Bench in Under an Hour

Brittni, It was fun seeing your behind the scenes photos. How did you clean up all that paint? Pat S

You’re definitely not alone, Courtney. Happens to us all!

Love seeing stuff like this. Makes me feel better when posts don’t always go as planned, that I’m not the only one!

So glad to hear that Michelle. I love sharing the imperfect behind the scenes shots.

It’s so refreshing to see your work behind the scenes, I find it so interesting to see how the posts and photos are staged!
https://www.makeandmess.com/

Awesome Taylor. Glad to hear that!

Thanks Emily. So glad to hear that this post has inspired you to share some outtakes of your own. 🙂

I love seeing your behind the scenes & outtakes. It shows how much work you put into making your pictures look as amazing as they do (and also that no one is perfect, so I’m motivated to get better!).

I’m getting more and more into diy body products and makeup tutorials lately, so I’ll have to consider posting some of my outtakes 😉